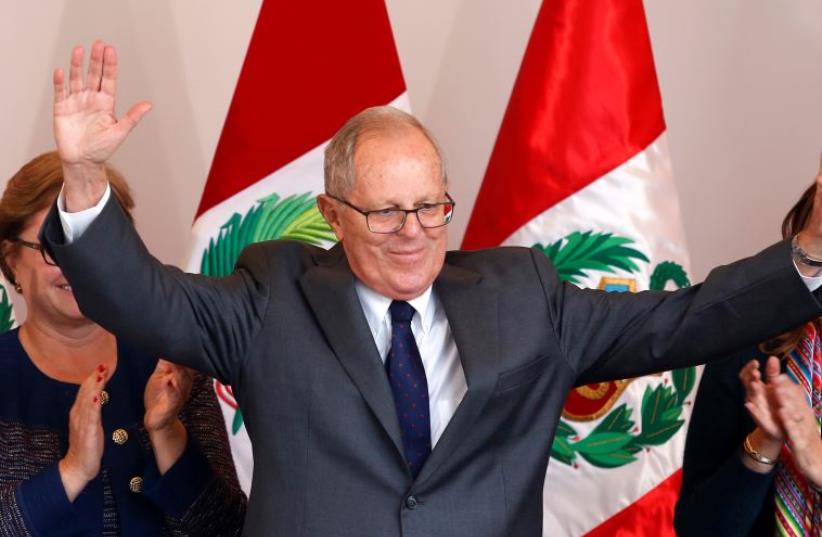 Peruvian President Pedro Pablo Kuczynski
(photo credit: REUTERS)
Advertisement
Pedro Pablo Kuczynski, a Peruvian banker and former prime minister whose father was Jewish, was elected as Peru’s president.Kuczynski won a bare majority of votes — 50.12 percent — over Keiko Fujimori, Peru’s national election office announced on its official Twitter page Thursday evening.Kuczynski, 77, was born in Lima to a French Protestant mother and a German Jewish father who fled the Nazis. He is nicknamed “El Gringo” – the American – for his ties to the United States, where he has lived from 1969 onward.“Thank you Peru, it is time to work together for the future of our new country,” Kuczynski announced on Twitter.He renounced his American citizenship last year, the La Republica newspaper reported.His father Maxime was a renowned pathologist and one of Peru’s leading public health administrators, pioneering the treatment of leprosy in Peru. He served in the German army during World War I, fleeing Berlin in 1933 because his family was Jewish.Kuczynski served as Peru’s prime minister from 2005-2006.In his early childhood, Kuczynski moved from Lima to Iquitos in the Amazon. His father was imprisoned for a year by the military dictatorship and then he spent a year in Switzerland with his mother and brother. Kuczynski completed his education in Britain and then in the United States.He held positions at both the World Bank and the International Monetary Fund before being designated as general manager of Peru’s Central Reserve Bank. He later served as minister of energy and mines in the early 1980s, and minister of economy and finance before he became prime minister.Comedians in Peru ridicule his American accent, and his longstanding ties to Wall Street anger some in an impoverished nation. Kuczynski seems to have embraced the foreigner label. A campaign slogan proudly proclaimed that he was “Gringo on the Outside, Cholo on the Inside,” a term referring to the indigenous ancestry of most Peruvians. At rallies, he entertains crowds by playing flute renditions of Andean classics.Former President Alan García once slammed him for not having “a single gram of Peruvian blood. He has Polish, Jewish, French, but Peruvian zero”.“Peruvians are asking themselves, ‘Can he represent me?’” Felipe Ortiz de Zevallos, former Peruvian ambassador to Washington, told Bloomberg days ago. “Can I have confidence in this guy? He’s old, his parents were European, his wife’s American, his kids live in the States.”Peru is currently Latin America’s fastest-growing economy. It grew 4.4 per cent in the first quarter from a year earlier, compared to 2.6 per cent in Mexico, 2 per cent in Chile, and Brazil contracting 5.4 per cent.