The wells were strategically placed along the ancient artery to provide water for inhabitants of the numerous villages located adjacent to it, according to the IAA. 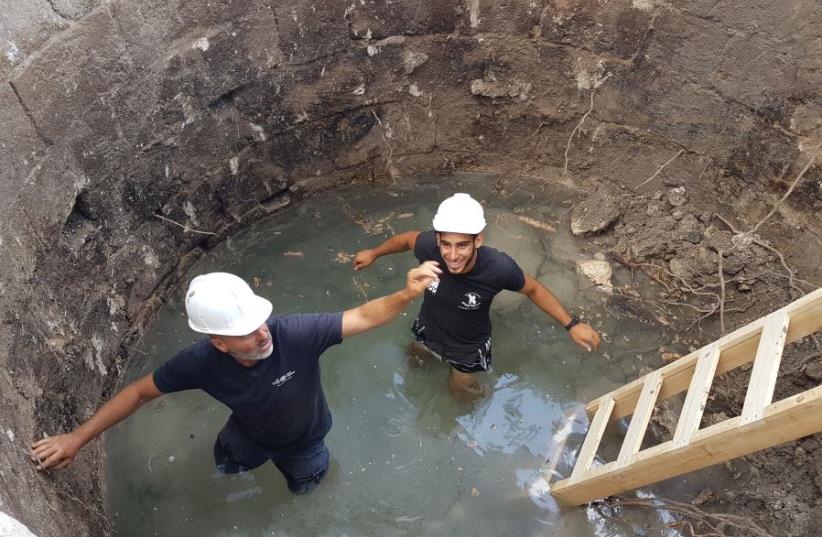 Israel Antiquities Authority guide Naftali Aizik and apprentice Faran Assaf Ramati work in the well
(photo credit: MICHAL HABER/IAA)
Advertisement
An Ottoman-era well and a sophisticated water storage system were recently unearthed by archeologists conducting an excavation near Ramat Beit Shemesh, outside of Jerusalem, the Israel Antiquities Authority said on Monday.The dig, carried out with student volunteers from a pre-military academy, was conducted in conjunction with Netivei Israel, which is in charge of planning, construction and maintenance of most road infrastructure. It was initiated as part of an effort to expand Route 38, which connects Sha’ar Hagai and Beit Guvrin.
Ottaman-era water well unearthed near Beit Shemesh (Photo by: Assaf Perez, IAA)
According to IAA excavation director Michal Haber, the well is 3.5 meters in diameter, 2 meters deep and is connected to a reservoir of ground water featuring a vaulted ceiling.“This well is one of several that have been documented over the years along Route 38,” said Haber. “Nowadays, it is not difficult to discern them, [as] palm trees and thick vegetation flourish around them.”
Ottaman-era water well unearthed near Beit Shemesh (Photo by: Assaf Perez, IAA)
The wells, Haber explained, were strategically placed along the ancient artery to provide water for inhabitants of the numerous villages located adjacent to it.“We believe that the installation of these wells and their sophisticated engineering methods were carried out at various times over generations to prevent dehydration and to meet the needs of the people on the road and those who lived alongside them,” he said.District archeologist Amit Shadman said the well and reservoir present a challenge for highway engineers.“The exposure of the site and its importance in the landscape pose a great challenge for the road planners and the Israel Antiquities Authority to find a way to preserve the site and, as far as possible, to develop it as part of rehabilitating the landscape along the road,” he said.