The defendant, Hagai Zaguri, is known for being a major underworld figure in and around the Be’ersheba area, and in 2012 was sentenced to 15 years in prison. 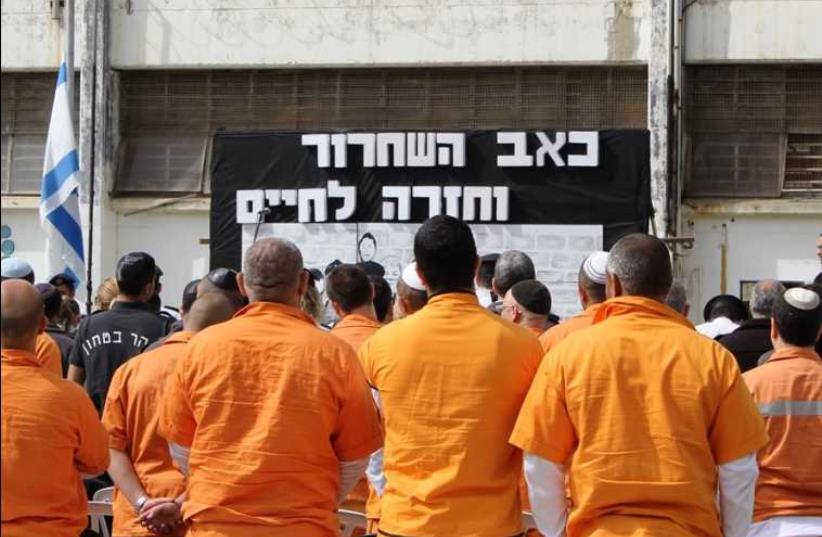 Inmates observe Holocaust Remembrance Day at Ayalon Prison
(photo credit: BEN HARTMAN)
Advertisement
A reputed mob boss from the South serving time in prison was sentenced to an additional 18 months on Wednesday after pleading guilty to bribing a guard to smuggle in contraband on repeated occasions.The defendant, Hagai Zaguri, is known for being a major underworld figure in and around the Beersheba area, and in 2012 was sentenced to 15 years in prison and fined NIS 1.25 million for a series of organized crime charges.In the Beersheba Magistrate’s Court on Wednesday, he admitted to paying a guard at Eshel Prison thousands of shekels on several occasions to smuggle in contraband, including NIS 3,500 for a cellular phone.The guard, identified only as “Guy,” also brought in alcoholic drinks and took an NIS 3,500 loan from Zaguri, which the reputed crime boss said the guard never paid back.Zaguri was convicted along with co-defendant Shlomi Ayash, the middleman who passed the money to Guy and brought Zaguri the contraband. Ayash was given two months in prison and community service.The smuggling of contraband is a problem of particular concern for the Israel Prison Service, in particular among security prisoners, who very regularly conspire with guards to smuggle in cell phones. Security authorities say the contraband phones are then used not only to speak to relatives but also to contact associates from terrorist organizations.Prisoners looking to smuggle goods often find accomplices among prison guards, who are often underpaid young officers or Israelis performing their national service in the IPS, and who find it hard to fight the temptation of bribes often running into the thousands of shekels.