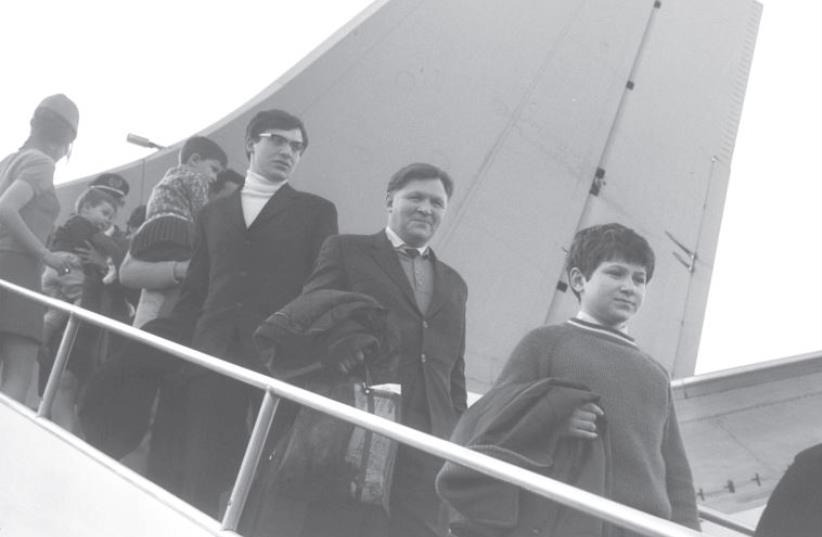 New immigrants from the Soviet Bloc disembark from an El Al chartered plane from Vienna at Lod Airport in 1971
(photo credit: MOSHE MILNER / GPO)
Advertisement
It’s been 25 years since a massive wave of immigration from the former Soviet Union began in Israel, but those immigrants still earn about a third less than their native counterparts.A Central Bureau of Statistics report released Tuesday revealed that, in 2014, Israelis from the FSU earned NIS 14,074 a month per household, as opposed to NIS 20,944 for natives.The statistics agency defined veteran or native Israelis as those households headed by a Jew born in Israel or who immigrated before 1989.Soviet olim also only took in about a quarter as much in pension income as native Israelis, with the report finding that just 8 percent of non-working Soviet immigrants of retirement age drew on pensions, compared with 54.8% of their native counterparts.The report revealed housing disparities at well, indicating that while 70% of native Israeli households lived in homes they owned, just 51.7% of Soviet olim did. Even among the Soviet immigrants, the numbers split depending on how long they had been in the country with some 57.9% of immigrants who arrived before 2000 owning their homes, but just 25.3% of those that arrived since doing so.The value of both groups’ homes were about 70% lower than those of natives, according to CBS.Poverty in the group was also higher, according to the report, which said that, in 2013, 15% of Soviet olim were poor compared to 11% of the Jewish population.According to the report, the differences persist despite the fact that the Soviets were well educated with 154,000 of the 1,040,000 immigrants having an academic degree when they arrived, and another 73,000 earning one in Israel. The most popular subject was engineering.Part of the reason for the disparity between the education and income of Soviet olim, CBS said, could be language since only 55% reported having a very good grasp of Hebrew speaking, while a quarter did not speak Hebrew at all. In reading, 36% reported minimal or no skills, while, in writing, 40% said they were weak or lacked any abilities.