Two other men from Serbia and Montenegro linked to arms trafficking were also arrested during the raid, which was coordinated by French police, the ministry said. 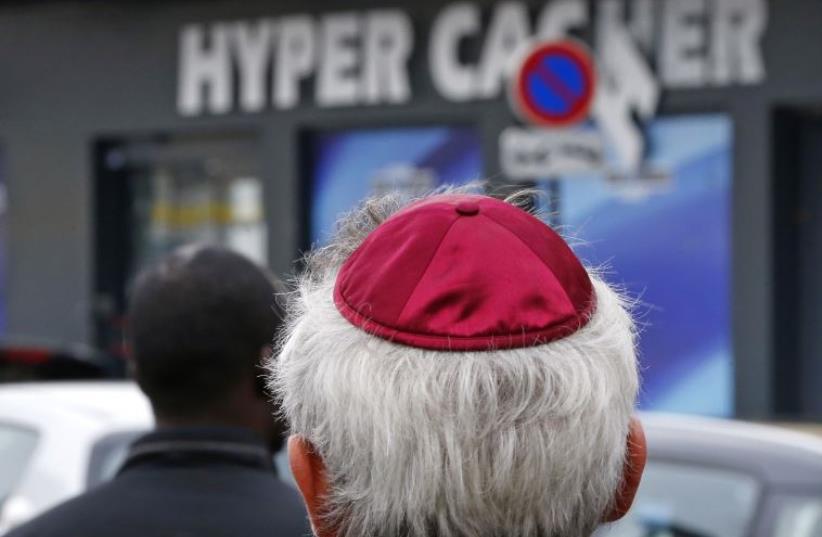 People pay tribute to the victims of a hostage taking outside the Hyper Cacher kosher supermarket near Porte de Vincennes in eastern Paris
(photo credit: REUTERS)
Advertisement
Spanish police have arrested a French man suspected of supplying the arms used by an Islamist militant to kill four people at a kosher supermarket and a policewoman in Paris in January 2015, Spain's interior ministry said on Wednesday (April 13).Antoine Denive, a 27-year-old from Sainte Catherine in France, was arrested on Tuesday (April 12) on a European arrest warrant at an apartment block in Rincon de la Victoria, a town close to Malaga on Spain's southern coast, the ministry said in a statement.Residents in the same building told Spanish agency Atlas they were surprised and scared by the arrest."I am very scared because because nobody seems to be safe these days. Before you know it, a terrorist can be next door. Apparently they have been there for two or three weeks and nobody knew about them. I go out for walks very often because I have dogs and never saw them before. I knew there were people inside the flat because they were making a lot of noise so if they wanted to go unnoticed they did not succeed," said a woman who declined to provide her name and who said she lived next door to Denive.Two other men from Serbia and Montenegro linked to arms trafficking were also arrested during the raid, which was coordinated by French police, the ministry said.The Islamist gunman Amedy Coulibaly killed a policewoman in a Paris suburb on Jan. 8 last year and attacked the supermarket the following day before being shot dead by police. Two other gunmen shot 12 people at and near the offices of the Charlie Hebdo newspaper in Paris on Jan 7.Neither the ministry nor police said where the weapons were handed over but the ministry said Coulibaly had been in Spain several days before the attacks, which he dedicated to the Islamic State militant group in a video.The ministry said Coulibaly was in Spain with his wife Hayat Boumeddiene and an unknown third person, before he accompanied Boumeddiene to Madrid's Barajas airport where she took a flight to Istanbul with the aim of joining Islamic State in Syria.Denive fled France several weeks after Coulibaly stormed the supermarket, the ministry said, and set up a new base in Malaga where he continued his illegal arms dealing using fake papers and a valid European passport in the name of a different person.The ministry did not say what weapons Denive supplied to Coulibaly but said Coulibaly was armed with two AK 47 assault rifles, two semi-automatic pistols, 20 sticks of industrial dynamite and a combat knife when he died.A spokesman for Spain's High Court said on Wednesday Denive had denied selling arms to Coulibaly but said he was willing to be extradited to France. The judge ordered that Denive be kept in jail but he would be tried in France as long as no other cases against him in Spain were found.France's Interior Minister Bernard Cazeneuve had congratulated his Spanish counterpart Jorge Fernandez Diaz on the success of the operation, a ministry spokesman in Madrid said.