Speaking for the dead at the March of the Living

Where an orchestra of death once greeted inmates, two shofarot now blow, and the march sets off from under the infamous “Arbeit Macht Frei” sign at the main gate of Auschwitz. 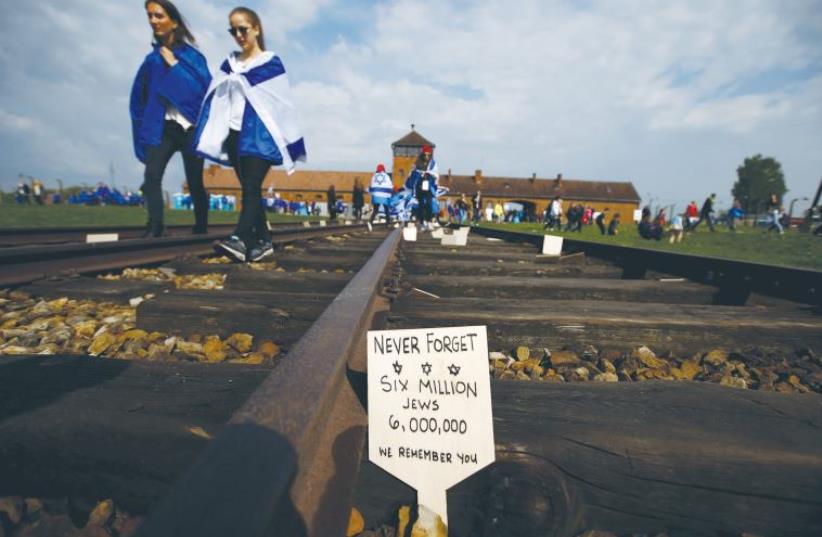 Jewish March of the Living participants walks along the tracks away from the entrance to the Birkenau death camp in May 2016
(photo credit: REUTERS)
Advertisement
AUSCHWITZ – “The living speak for the dead,” wrote Auschwitz survivor and author Primo Levi, and today they spoke out loudly and clearly.Some 10,000 people, Jews and non-Jews, young and old, teachers and students, survivors, second and third generations, in a babel of languages – Hebrew, Spanish, Polish, French, Japanese – came from more than 40 countries to march the three-and-a-half kilometers from Auschwitz to Birkenau to proclaim “Never Again.”Here, where evil reached its climax, where the unspeakable and unimaginable took place, where the worst that could happen did happen, they marched to say never again shall we be silent when innocent people are being slaughtered, never shall we stay silent in the face of evil, never shall we stay silent in the face of dehumanization and intolerance.But more than anything, they march for a better future.As we wait for the March of the Living to begin, I have time to tour the barracks at Auschwitz, which have been turned into museum exhibits.Outside block 27, I talk to Max Glauben, an eternal Holocaust survivor, who came here from Dallas, Texas.He tells me how when he was just 13 years old he was taken to a work camp with his father, who was murdered only three weeks later.Glauben went on to survive work camps and death camps, Majdanek, Budzyn, Mielec, Wieliczka, Flossenburg, and the Death March to Dachau.And yet he remains an eternal optimist.I ask him what he feels coming to Auschwitz after all he has been through.His message is one of free will and hope, not one of bitterness and despair.Max says people should come here to see for themselves what happened in this place, because that is the only way to fully appreciate the horrors that occurred.But he adds that what they should take away from visiting the camp is that they can, and must, choose between good and evil, and that they should be leaders not bystanders.Above all, they should channel their energies to creating a better world, he says.After bidding farewell to Max, I enter another block where a catalog of depravity and cruelty is on display – killing by suffocation, by starvation, by hanging; the mechanisms of fear used to control the inmates.Exiting the dark, suffocating block I am met by the joyous laughter of youth, defiant and resilient. The march is not a solemn event, it is a celebration of life in the face of death.Where an orchestra of death once greeted inmates, two shofarot now blow, and the march sets off from under the infamous “Arbeit Macht Frei” sign at the main gate of Auschwitz.Many are draped in Israeli flags, others are carrying flags of different countries, people sing along the route until they reach the entrance to Birkenau.There, as names of children who were murdered at Auschwitz-Birkenau are read out, the march falls silent.Along the tracks leading into the camp, participants plant placards into the ground: “I march for Robert Reichner and all of the special-needs children,” reads one. “Remembering all those we have lost. We will never forget,” reads another.Many shed tears.The skies too open up, and as we walk through the entrance to the camp where the selections took place – those who were sent immediately to their deaths in the gas chambers and those who were sent to slave labor – there is a downpour as if the heavens are shedding tears with us.The march continues down the tracks. On both sides of the embankments stand remnants of the camp: Watchtowers, barbed wire fences, barracks and gas chambers, evil as far as the eye can see.The march goes on in the pouring rain until the tracks come to an end.At the closing ceremony, the IDF chief cantor sings the prayer of El Malei Rachamim in remembrance of the victims of the Holocaust, for the “six million Jews, victims of the European Holocaust who were murdered, slaughtered, burnt and exterminated for the Sanctification of the Name, by the German Nazi assassins and their helpers from among the peoples.”It is a somber moment followed by Kaddish, the mourners’ prayer. Finally, the national anthem, Hatikva, resonates 10,000 strong throughout the camp.The dead have found their voice.