A tale of two teams in State Cup final 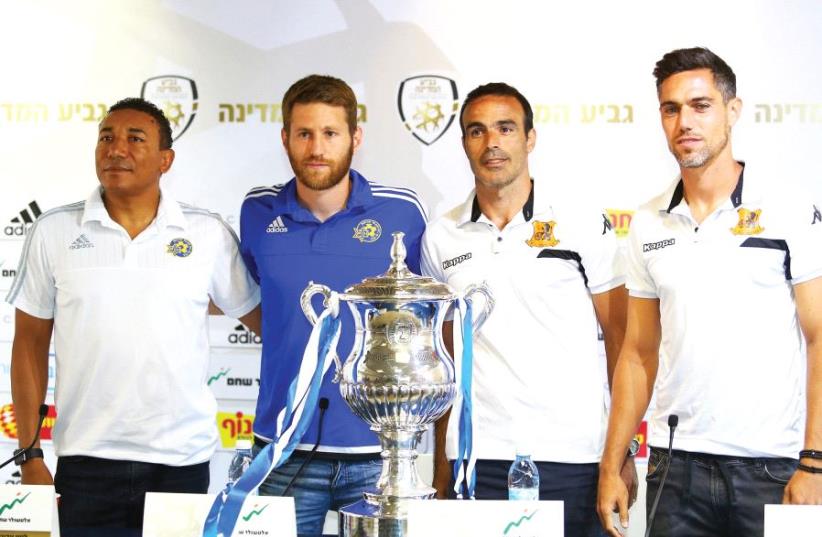 The coaches and captains of Maccabi Tel Aviv and Bnei Yehuda – (from left) Lito Vidigal and Sheran Yeini of Maccabi Tel Aviv and Bnei Yehuda’s Kfir Edri and Itzik Azuz – pose with the State Cup ahead of the final between the teams at Jerusalem’s Teddy Stadium.
(photo credit: ADI AVISHAI)
Advertisement
A second straight season without a title is unthinkable for Maccabi Tel Aviv.For Bnei Yehuda, Thursday’s State Cup final at Teddy Stadium in Jerusalem presents a rare opportunity to add to the club’s modest trophy cabinet.After finishing in second place behind Hapoel Beersheba for a second straight season, and following last season’s shock defeat to Maccabi Haifa in the cup final, Tel Aviv is in danger of suffering another heartbreaking ending to a campaign.Maccabi enters Thursday as a massive favorite, but after dominating last season’s final and still losing, the yellow-and-blue will be taking nothing for granted against Bnei Yehuda, which only secured another season in the top flight in the penultimate week of the league campaign.Maccabi, which last won the cup in 2015 with a victory over Beersheba in the final, will become just the second team since 1983 to play in three straight finals, joining the Hapoel Tel Aviv sides which lifted the cup three years in a row between 2010 and 2012.Bnei Yehuda will be playing in its first State Cup final since 2010, with the club targeting a third cup triumph in its history and a first since 1981. Bnei Yehuda last claimed a significant title in 1990 when it won its one and only championship.Despite only joining the club in February following the sacking of Shota Arveladze, Maccabi coach Lito Vidigal is in danger of losing his job this summer.The Angolan has a contract for 2017/18, but there has been some dissatisfaction with his work among the players and a failure to win the cup could make the decision regarding his future a lot easier for Maccabi owner Mitch Goldhar.“Each team has a 50 percent chance of winning and I’m expecting a very difficult match,” said Vidigal on Wednesday. “We are focused on our mission and we know we must win a title this season.“I’m continuing to prepare the team for next season,” added the Angolan. “But we need to first take the cup and only then can we fully focus on next season.”While there is plenty of uncertainty surrounding Maccabi ahead of 2017/18, including the future of sports director Jordi Cruyff, the yellow-and-blue’s troubles pale in comparison to those of Bnei Yehuda.The club from Hatikvah neighborhood in south Tel Aviv has been in complete disarray over recent weeks. CEO Kfir Edri and goalkeeping coach Yakov Asayag guided the team in its final two league games and will also be on the sidelines for Thursday’s final following the resignation of coach Nissan Yehezkel and the departure of sports director Yitzhak Schum. Yehezkel quit after claiming he wasn’t given the freedom to make his own decisions, while Schum was sacked by owner Barak Avramov three days later.Yossi Abuksis, who guided Bnei Sakhnin this season, has already been signed to coach the team in 2017/18. Edri and Asayag are hoping he inherits a side qualified for the Europa League next season by virtue of a win on Thursday.A Maccabi victory will give Maccabi Petah Tikva, which finished in fourth place in the league standings, a place in the Europa League in 2017/18.“I didn’t want to coach, but the club found itself in this situation and Asayag and I were asked to take charge,” explained Edri. “It is true that Maccabi is the favorite and has a better team, but that doesn’t mean it is impossible for us to win. There are no rules to matches like this. Everyone at the club wants to win this title for the first time after 36 years.”Maccabi captain Sheran Yeini insisted on remaining positive in Wednesday’s pre-match press conference, refusing to answer any questions regarding the team’s future should it lose to Bnei Yehuda.“Regardless of the result in the final the club is planning to make adjustments ahead of next season,” said Yeini. “We really want to win the cup and are focused on that and not thinking about what might happen if we lose.”On TV: State Cup final: Maccabi Tel Aviv vs Bnei Yehuda (live on Sport5 at 8:45 p.m.)