Analysis: Israel confident of progress to playoffs after draw

With Israel having the advantage of a two-point gap and the head-to-head tiebreaker, the Bosnians need to collect three more points than the blue-and white to finish in third. 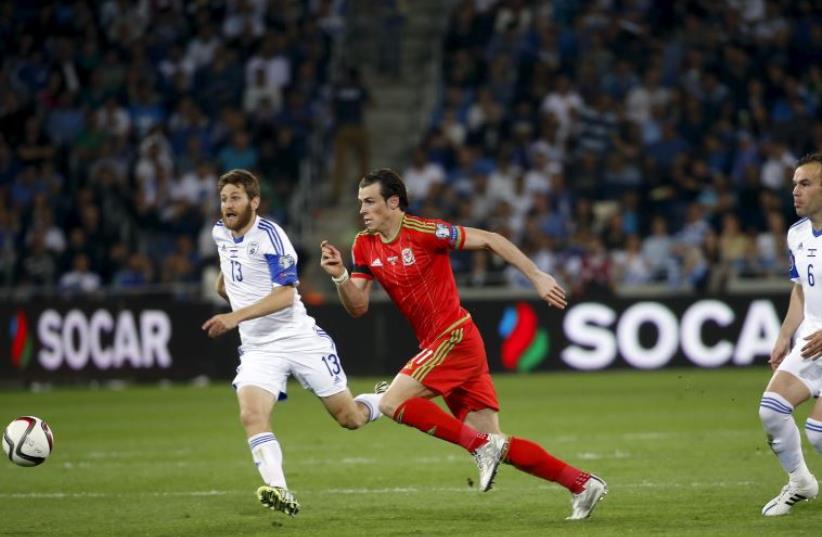 Israel-Wales Euro 2016 Group B qualifying soccer match at the Sammy Ofer Stadium in Haifa March 28, 2015
(photo credit: REUTERS)
Advertisement
Despite spoiling the party in Cardiff on Sunday, Israel is hoping Wales can do it a favor next month and allow the blue-and white to wrap-up third place in Group B and secure a playoff berth in Euro 2016 qualification with one match to spare.The 0-0 draw against Wales combined with Bosnia-Herzegovina’s 3-0 win over Andorra means Israel requires four points from its remaining two qualifiers to advance to the playoffs regardless of other results in the group. However, while the national team will be confident of picking up three points against Cyprus at Teddy Stadium in Jerusalem in its next qualifier on October 10, it will be a firm underdog against Belgium in Brussels three days later in its final match of the campaign.With Israel having the advantage of a two-point gap and the head-to-head tiebreaker, the Bosnians need to collect three more points than the blue-andwhite to finish in third.Bosnia hosts Wales on October 10 before visiting Cyprus three days later.Had Wales already secured its qualification by beating Israel on Sunday it would have entered the match in Zenica with nothing to play for. However, the goalless deadlock in Cardiff means Wales still needs one more point to qualify for its first major tournament since 1958 and will have plenty on the line against Bosnia, even though it will end the campaign with a home match against Andorra.While Israel still has its fate in its own hands, the blue-and-white will cross its fingers Wales can do it a favor in Bosnia while it attempts to beat Cyprus, a combination of results that will book a playoff berth before Eli Gutman’s men even leave for Belgium.“We picked up an important point which slightly changed the picture in the group,” said goalkeeper Ofir Martziano, who made several crucial saves in Cardiff. “It is only natural that they were the more attacking team but we were ready for them. We will face a very tough match against Cyprus but we will be ready. This is a chance we must take.”