The Czechs delighted in the win and advanced to a playoff clash for a place in next year’s finals, a week-long event contested among the world’s top 16 men’s tennis nations.

The Czech Republic’s men’s tennis team, hotly favored to beat hosts Israel in the Davis Cup World Group I match in Tel Aviv yesterday, eventually achieved the result they had sought as they scored a 3-1 win, but the contest ended up being a closer affair than had originally been anticipated.

Going into the second day’s play on Saturday with a 2-0 lead after having won both of Friday’s singles matches, and looking far stronger than their hosts, the Czech players were nevertheless stretched, and the home fans were given reason to cheer and were administered a small dose of optimism for the future.

In Saturday’s first match, team captain Yoni Erlich and No. 2 singles player Daniel Cukierman put Israel on the scoreboard and were buoyed by a crowd of about 2,000 spectators at the indoor Shlomo Group Arena as they came back from an early deficit in the first set for a well-deserved 6-4, 6-3 win over the Czech duo of Jiri Lehecka and Tomas Machac.

The visiting duo were called on by their captain, Jaro Navratil, in place of his original picks for the doubles after both comfortably won their opening singles matches on Friday.

After pulling back the score in the encounter to 1-2, Israel’s designated No. 1 player, Edan Leshem, ranked at 444 in the world in singles, gave Lehecka, the world No. 63, a tough test. It was much against expectations. 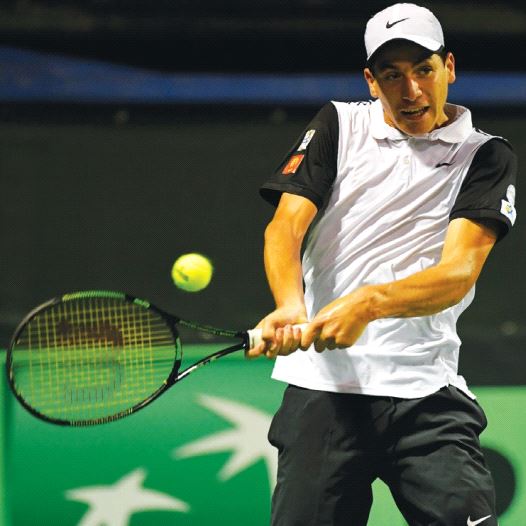 Lehecka returned after a 30-minute rest following defeat in the doubles, where he did not look as fluent as he had on Friday, and he eventually notched the decisive win 4-6, 6-0, 7-5 against Leshem.

The Israeli produced some superlative shot-making, but it counted for little because of intermittent unforced errors that most probably cost him the chance of an unlikely win and gave Israel hope of a stunning upset had the match gone to a fifth and decisive match.

The Czechs delighted in the win and advanced to a playoff clash for a place in next year’s finals, a week-long event contested among the world’s top 16 men’s tennis nations.

On Friday, Cukierman, Israel’s designated No. 2 player, who has a world ranking of 450, battled hard against Lehecka, but the difference in the ranking was very apparent, as the tall, powerful 20-year-old Czech right-hander had little trouble in summoning his best abilities as he overcame his Israeli opponent 6-0, 6-4 in an hour and 14 minutes.

Whenever Cukierman appeared to get close to Lehecka, the Czech player instantly raised his game and produced perfect shots to kill any hope his Israeli opponent thought he might have.

Leshem had a closer encounter against Mahac, the Czech No. 2 ranked 109, but his inability to maintain consistency in his play as he suffered occasional lapses of concentration also snuffed out any hopes of a home win, as Machac sealed a 6-4, 7-5 result in an hour and 52 minutes.