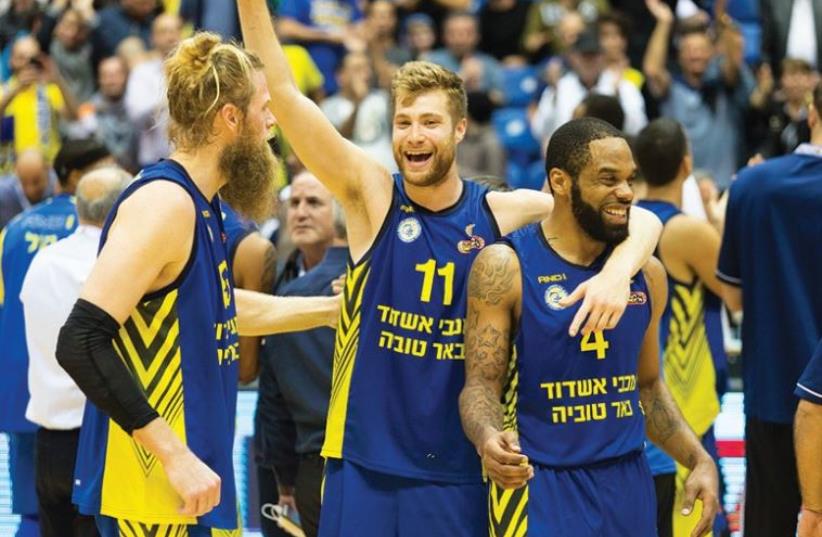 Maccabi Ashdod’s Jonathan Skjoldebrand (left), Willy Workman (center) and Isaiah Swann celebrate after their team’s 84-82 double-overtime win over Maccabi Rishon Lezion in the State Cup semifinals at Yad Eliyahu Arena last night.
(photo credit: ODED KARNI/ISRAEL BASKETBALL ASSOCIATION))
Advertisement
After a coaching career spanning more than 40 years, 16 teams and numerous titles, Tzvika Sherf is a win away from one of his most unlikeliest triumphs after guiding Maccabi Ashdod to the State Cup final for the first time in club history on Monday.Ashdod claimed a nail-biting 84-82 double-overtime victory over Maccabi Rishon Lezion in the first semifinal of the night at Yad Eliyahu Arena, going on a 14-0 run late in the fourth quarter to force the first overtime and holding on for the victory after Rishon’s Mark Lyons missed a chance to win the game at the end of the second extra period.Maccabi Tel Aviv faced Ironi Ness Ziona in the second semifinal of the day which ended after press time. The final will take place at Yad Eliyahu on Thursday.The 64-year-old Sherf made his breakthrough as a coach in the 1980’s, winning 10 champion- ships and six State Cups with Maccabi Tel Aviv, while also reaching two European finals.He went on to coach in Greece, France, Poland and Russia, as well as guiding the Israel national team in eight European Championships.He joined Ashdod last January, replacing the sacked Lior Lubin, and while the team has struggled for consistency this season, currently owning a 9-10 record in the BSL, it has made the most of its opportunity in the cup.Ashdod beat Hapoel Kfar Saba of the National League in the round of 16 and Maccabi Kiryat Gat in the quarterfinals before edging Rishon, leaving Sherf within touching distance of a seventh cup.“I’m excited because I have led a team with little aspirations and a small budget to the cup fi-nal,” said Sherf. “We have come back from big deficits all season and I believed we could do it again.Both teams were exhausted by the second overtime and the team that managed to make the right decision on its final fumes won the game.”Charles Thomas had 20 points and 11 rebounds for Ashdod, with Diante Garrett adding 18 points (shooting a poor 5-of-26 from the field), nine assists and eight rebounds and Isaiah Swann contributing 17 points.Chris Wright had 17 points for Rishon, with Shawn Dawson adding 13 points, but connecting on just 3-of-16 field-goal attempts.Both Ashdod and Rishon were shockingly poor from threepoint range, each shooting 18 per-cent. Ashdod hit just 6-of-33, while Rishon went 7-of-40.After three tight quarters, a triple by Tony Younger to end the third frame gave Rishon a threepoint edge (50-47) entering the final 10 minutes. Willy Workman netted the first basket of the final quarter to bring Ashdod within a single point, but Rishon responded with a 11-0 surge, opening a double-digit margin (61-49).Ashdod still trailed by 12 points with four minutes remaining, but it turned the game on its head with a 14-0 run, with a stunning Swann three from way behind the arc tying the score (66-66) with 1:50 minutes to play before Thomas capped the surge to give his side the lead. Darryl Monroe’s midrange jumper forced overtime, and with both teams combining for 12 points in the extra five minutes, the encounter went into a second overtime.Ashdod scored six in a row to start, but there was no way the contest would not be decided in the final seconds. Yehu Orland scored just one of two free-throw attempts, and Lyons could have won the game for Rishon, only for his three-point shot to bounce in and out at the buzzer.