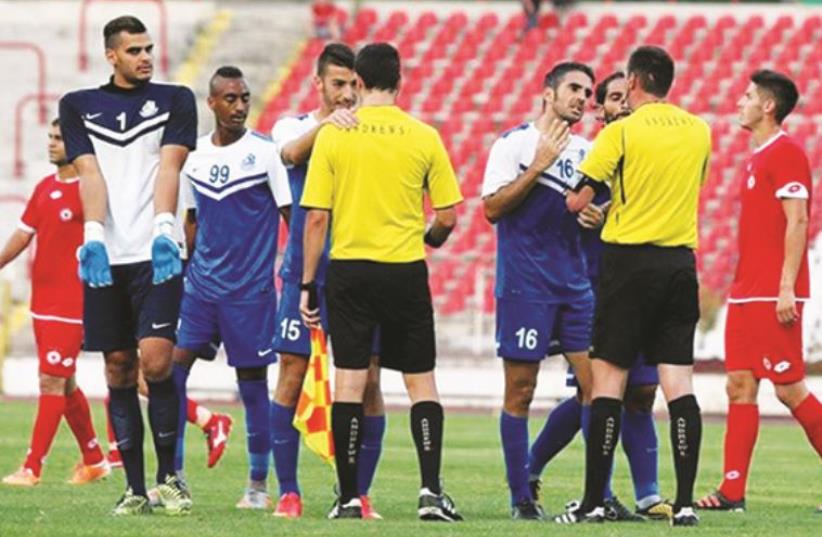 Ashdod SC players (in blue) were unhappy with the officiating staff even before matters got completely out of hand in Monday’s pre-season match against CSKA Sofia in Bulgaria
(photo credit: CSKA SOFIA WEBSITE)
Advertisement
Ashdod SC players said they feared for their lives after being forced to run for cover from local fans in Bulgaria during Monday’s so-called friendly soccer match against CSKA Sofia.Ashdod, which was relegated from the Premier League to the National League last season, is preparing for the new campaign in Bulgaria and arranged several games against local sides in order to build up match fitness.However, while most preseason matches are usually quickly forgotten, Monday’s game against CSKA is bound to live long in the memory of Ashdod players who were forced to flee the stadium after dozens of Sofia fans assaulted them, kicking and punching players while also throwing bottles at the team and its staff.Tempers flared early in the encounter, but matters got completely out of hand in second-half stoppage time when Ashdod’s Niv Zrihen was sent off for a rough foul on a Sofia player.The CSKA players immediately confronted the Ashdod players and soon afterwards dozens of supporters burst onto the pitch and attacked the stunned Israelis.The Ashdod players and staff raced up an empty stand at the other end of the stadium seeking cover and were eventually escorted back to their hotel by local police.Ashdod’s players and coaches were lucky to escape with bruises, with coach Eyal Lachman being hit in the face by a glass bottle.“From the start of the match they began throwing bottles at us and were singing anti-Semitic songs against Israel,” said Ashdod striker Michael Ohana. “We prayed that we would be able to leave the stadium safely. You don’t think about it when it happens, but there is no doubt that our lives were in real danger at that moment.”Zrihen was the third Ashdod player to be sent off in the match, with Gadi Kinda being shown a red card in the 20th minute for complaining to the referee that he wasn’t officiating the match fairly. Nigerian defender Ali Abubakar was also sent off before Zrihen’s foul was followed by the pitch invasion and the violent scenes.“It was really scary,” said Ashdod’s Roei Dayan. “We only finally relaxed once we were all in the dressing room and the door was locked behind us. After we returned to the hotel we watched the videos on YouTube and realized how crazy it was.”