Beitar goalkeeper Boris Kleyman ensured his team left with the three points after saving a penalty from Firas Mugrabi in the 73rd minute. 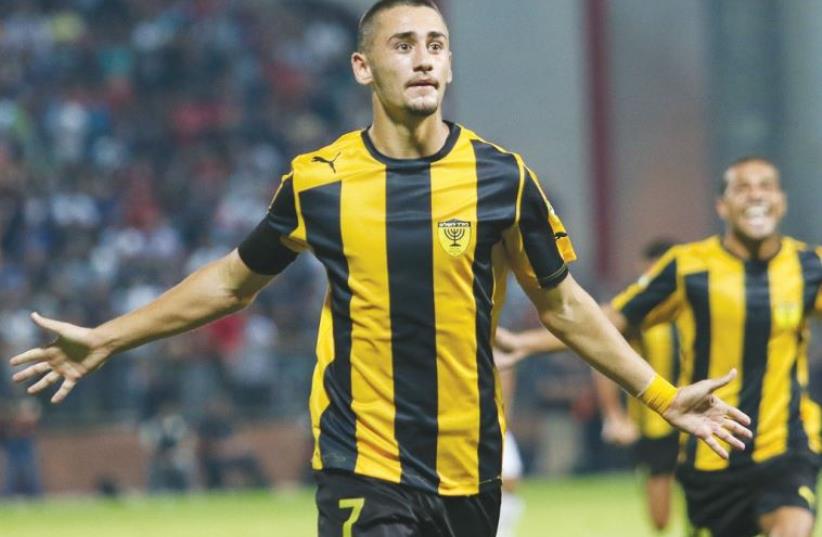 Beitar Jerusalem midfielder Omer Atzili
(photo credit: ERAN LUF)
Advertisement
Omer Atzili showed why he is regarded as one of Israel’s best young players after stealing the show on Monday night, scoring two goals and setting up another to lead Beitar Jerusalem to a 3-1 win at Bnei Sakhnin.Much of the build-up to the match between the two bitter rivals focused on both sets of supporters, with over 800 policemen and stewards being deployed at Doha Stadium in an attempt to keep the peace. Six fans were arrested after several minor altercations, but it was Atzili who grabbed the headlines, helping Beitar to its first win at Sakhnin after nine years.The 22-year-old midfielder, who joined Beitar two years ago, was responsible for Dovev Gabay’s 21st-minute opener, floating a perfectly- weighted pass for the striker to head in. Sakhnin netted a deserved equalizer in the 45th minute through Shlomi Azulay, but it took 10 second half minutes for Atzili to move Beitar back in front, heading in from close range. Nine minutes later, he scored the goal of the match, cutting in from the right flank before releasing an unstoppable effort with his left foot from the edge of the box.Beitar goalkeeper Boris Kleyman ensured his team left with the three points after saving a penalty from Firas Mugrabi in the 73rd minute before making another sensational stop one minute later, denying Tzahi Elihen.“These are the happiest goals of my career,” said Atzili after Beitar snapped a 12-match winless streak against Sakhnin. “I had a good match and I’m happy we won. The fans have waited nine years for this win.”Beitar registered its second straight victory after going winless in its first four games of the campaign and coach Slobodan Drapic was delighted with what he saw.“We were under pressure ahead of the match and I’m happy we did well,” said Drapic. “We conceded a goal at a crucial moment and I had to lift the players at the halftime break.We still have plenty to work on, but it is better to do so after a win. Beitar needs to be a top team and this win will help us.”Beitar hooligans arrested for attack on supporter of Hapoel Tel Aviv Three suspects reputedly linked to the La Familia fan club have been arrested in connection to the attack of a Hapoel Tel Aviv fan who was hit in the head with a hammer and seriously wounded Saturday night.The incident took place after a bus carrying Hapoel fans let them off near a club owned storage facility in south Tel Aviv, where they were ambushed by a group of Beitar fans. Not long after police broke up the fight, a Hapoel fan walking through the city’s Florentine neighborhood was pounced upon by a group of Beitar fans and hit in the head with a hammer.The victim remains in serious condition and police are treating the attack as an attempted murder.A third suspect turned himself in on Monday, and police say the investigation is ongoing to find if there are additional assailants who were involved.On Sunday, the remands of the first two suspects were extended by three days at the Tel Aviv Magistrate’s court.The Israel Football Association condemned what it called “a violent criminal attack” and said it will do whatever it can to help police find and prosecute those responsible.