Maccabi led from start to finish, building an eight-point gap (22- 14) by the end of the first quarter. 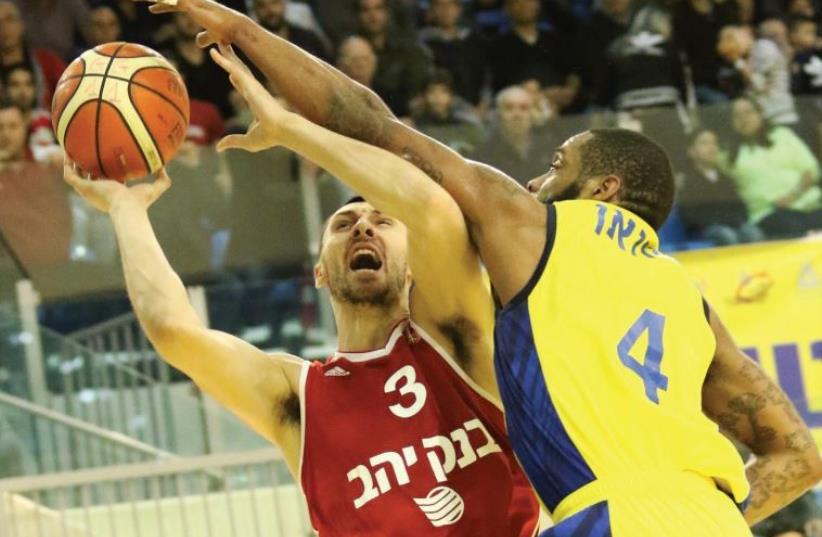 Maccabi Ashdod guard Isaiah Swann (right) blocks Hapoel Jerusalem’s Tony Gaffney
(photo credit: DANNY MARON)
Advertisement
Hapoel Jerusalem lost in the BSL for the first time in over a month on Sunday night, while Maccabi Tel Aviv bounced back from its Euroleague exit with an easy win over Kiryat Gat.Jerusalem fell to 9-3 after its fivegame winning streak was snapped by an 80-76 defeat at Maccabi Ashdod.The hosts were in control for much of the night, but Jerusalem fought back and Tony Gaffney’s three-point play with 3:03 minutes remaining gave Hapoel its first lead in the second half. However, Ashdod replied with an 8-0 run, capped by a Yehu Orland three-pointer with 1:24 on the clock, to clinch the win.Isaiah Swann led Ashdod with 25 points and eight rebounds. Diante Garrett added 18 points for Tzvika Sherf’s team, which improved to 6-6. E.J. Rowland led Jerusalem with 17 points.Elsewhere Sunday, Hapoel Eilat beat Maccabi Rishon Lezion 84-72, while Maccabi Tel Aviv began picking up the pieces from its Euroleague exit with an 88-63 win at Maccabi Kiryat Gat.Maccabi led from start to finish, building an eight-point gap (22- 14) by the end of the first quarter.The margin reached double digits at the start of the second frame, but Kiryat Gat trailed by just four points (39-35) following Meir Tapiro’s buzzer-beater to end the first half. Kiryat Gat would come no closer, with an 18-4 run capped by a Brian Randle dunk opening a 21-point cushion (67-46) at the start of the fourth quarter which the hosts were never going to erase.Dragan Bender led Maccabi with 15 points in 17 minutes, with Jordan Farmar adding 14 points and six assists.“We have won six games in a row so for us we feel like we are getting better,” said Farmar, overlooking the fact that Thursday’s win over Darussafaka in Istanbul was pointless. “A lot of things have gone against us, but it is a long season and we are improving and that is what is important. We can only play the games that are in front us. We are professionals and we are required to do our best.”Farmar couldn’t hide his dejection at being knocked out of the Euroleague so early in the season.“It’s tough,” he said. “It is not what I imagined coming in but it is where we are now. We put ourselves in this situation and now we just need to look forward and try to win the competitions we still have to play. We have come a long way since starting poorly and if we continue to make progress we will be alright.”Romero Osby had 15 points for Kiryat Gat (3-9).After a tight first quarter in Eilat ended in an 18-14 lead for the visitors, the hosts scored 21 of the final 27 points of the second period to take a double-digit lead (39- 28) into the interval. Eilat built on the momentum at the start of the second half, opening with a 17-5 surge to establish an unassailable 23-point margin (56-33).Alade Aminu had 23 points and 10 rebounds for Eilat, which improved to 5-7 with its second straight win. Shawn Dawson scored 16 points for Rishon, which lost for the first time in five games and dropped to 8-3.On Monday, Hapoel Tel Aviv hosts Ironi Ness Ziona.