Jerusalem climbed to the top of the BSL standings with an 86-84 overtime win at Maccabi Haifa on Friday afternoon, improving to 7-2. 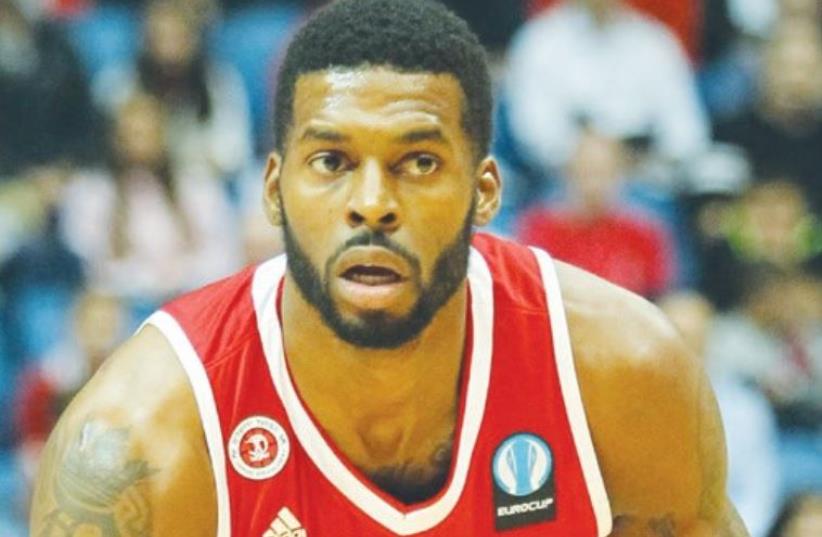 Hapoel Jerusalem forward Donta Smith
(photo credit: DANNY MARON)
Advertisement
Hapoel Jerusalem looks to make it two wins in three days on Sunday night when it hosts Maccabi Kiryat Gat at the Jerusalem Arena.Jerusalem climbed to the top of the BSL standings with an 86-84 overtime win at Maccabi Haifa on Friday afternoon, improving to 7-2.The hosts dramatically forced overtime, but Jerusalem still held on for a nail-biting win. Hapoel trailed by seven points (41-34) at the interval, but opened the second half with an 8-0 run and a tight finish would ensue.With three seconds remaining in regulation and Haifa trailing 77-75, Jon Dibartolomeo intentionally missed his second free-throw attempt and Rene Rougeau scored from the rebound at the buzzer.There was still little to separate the teams during overtime, but Haifa missed a chance to tie the game with 2.4 seconds to play when Yiftach Ziv missed both his shots from the line.Donta Smith led Jerusalem with 20 points, 13 rebounds and six assists against his former team, with Bar Timor adding 17 points. Will Graves had 16 points for Haifa, which fell to 5-4.“Haifa is a good team at home and we knew it would be tough coming here,” said Smith. “I have no special feelings playing in Haifa. It is part of my career in Israel and there is a great atmosphere here.”Following Sunday’s game against Kiryat Gat (2-7), Jerusalem hosts AEK Athens in a crucial contest in Eurocup action. A defeat will officially end Hapoel’s hopes of reaching the next round.“We still need to learn how to prepare ourselves for two games a week,” said Jerusalem coach Danny Franco. “It is all about energy and concentration.”Bnei Herzliya continued its excellent form on Saturday, beating Maccabi Ashdod 89-88 for its sixth win in the past seven games.Herzliya improved to 6-4 after Stephen Dennis scored the go-ahead basket with eight seconds to play and Isaiah Swann failed to get a shot off for Ashdod at the buzzer.James Singleton led Herzliya with 19 points while Dennis added 15 points. Swann finished with a triple-double of 16 points, 13 assists and 11 rebounds for Ashdod, which fell to 5-5.Elsewhere Sunday, Hapoel Tel Aviv hosts Hapoel Holon.On Monday, Maccabi Tel Aviv welcomes Hapoel Eilat and Ironi Nahariya visits Ironi Ness Ziona. Maccabi Rishon Lezion hosts Maccabi Haifa on Tuesday.