Hapoel had lost four of five games over all competitions before thrashing Hapoel Eilat 99-73 in BSL action on Saturday to pick up some much-needed confidence. 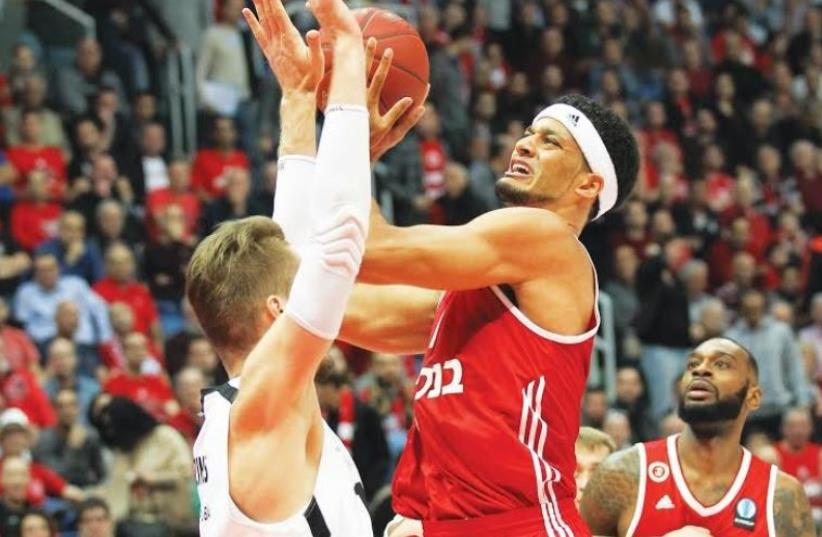 Hapoel Jerusalem’s Josh Duncan
(photo credit: DANNY MARON)
Advertisement
Anything but a win against Neptunas Klaipeda in Lithuania on Tuesday night will leave Hapoel Jerusalem on the brink of yet another early Eurocup exit.Jerusalem dropped to 2-4 in regular season Group F last week following a 74-70 defeat to Nizhny Novgorod at the Jerusalem Arena, Hapoel’s first home loss of the season.Danny Franco’s team enters Tuesday’s encounter one game back of a place in the top four which will lead to the Last 32, but a defeat to Neptunas combined with an expected win for Nizhny at home against rock-bottom Krasny Oktyabr Volgograd on Wednesday will leave the Israeli champion in a two-game hole with three games to play.Complicating matters even further for Jerusalem is its recent dismal road record in continental competition, with the team winning just one of its past nine Eurocup trips stretching back to the 2013/14 campaign. Hapoel has lost all three of its road games in the competition so far this season, squandering double-digit margins against Nizhny and AEK Athens and a fourth-quarter lead versus Galatasaray.Hapoel had lost four of five games over all competitions before thrashing Hapoel Eilat 99-73 in BSL action on Saturday to pick up some much-needed confidence.Franco also received good news on the injury front, with guard Yotam Halperin playing six minutes against Eilat and forward Lior Eliyahu set to make his return from a broken finger on Tuesday.“It was important to win after a tough period,” said Franco. “I don’t think we were in a crisis. A team in a crisis doesn’t play with the determination we showed against Eilat and in the defeat to Nizhny last week. We have four more games to play in the regular season and we need to win as many of them as possible.”Ashdod extends win streak Maccabi Ashdod took its BSLbest winning streak to a club record five games on Monday night, beating Maccabi Kiryat Gat 90-89 after a dramatic finish.Ashdod, which improved to 5-3, looked to be cruising to the win after Isaiah Swann’s free-throws made it a five-point game (88-83) with 16 seconds to play. However, Devin Oliver hit a three-pointer at the other end and Paul Delaney’s triple gave Kiryat Gat the lead with four seconds remaining following a Swann turnover.Ashdod would have the last laugh though, with Diante Garrett netting the winning basket.Charles Thomas led Ashdod with 26 points and eight rebounds, with Delaney and Alando Tucker each scoring 16 points for Kiryat Gat, which fell to 2-6.Also Monday, Hapoel Holon (2-5) fell to its fourth straight defeat, losing 70-61 to Ironi Nahariya (5-3). Cameron Clark had 24 points and 11 boards for Nahariya, with Mike Moser scoring 14 for Holon.