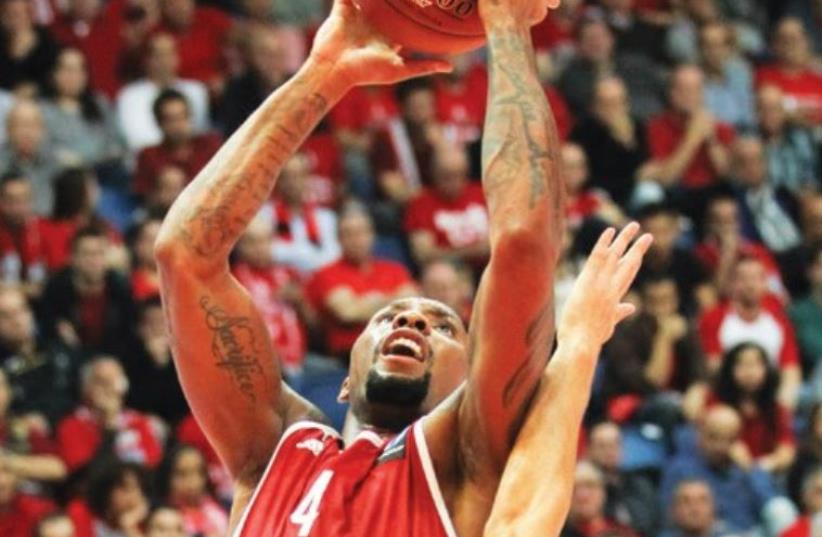 Hapoel Jerusalem guard E.J. Rowland shoots over Andrey Mateyunas of Krasny Oktyabr Volgograd
(photo credit: DANNY MARON)
Advertisement
Hapoel Jerusalem got its Eurocup campaign back on track on Wednesday night with a dramatic 92-90 win over Krasny Oktyabr Volgograd of Russia at the Jerusalem Arena, benefiting from a massive slice of luck after the visitors missed an open layup at the buzzer which would have sent the game to overtime.Jerusalem overcame the absence of Lior Eliyahu and Yotam Halperin and an injury to Josh Duncan, who left for the dressing room with a concussion in the first half. The game would come down to the closing minutes, with the already shorthanded Jerusalem looking to be in real trouble after star forward Donta Smith fouled out with 3:21 minutes to play.However, Tony Gaffney’s three-pointer with 1:19 remaining brought the game level (86- 86) and E.J. Rowland’s triple with 21 seconds left opened a three-point margin. Volgograd had a chance to force overtime after Matt Janning missed one of his two free-throw attempts, but Jajuan Johnson somehow failed to score with the basket at his mercy and Jerusalem survived.Rowland led Jerusalem with 22 points, 12 assists and seven rebounds, with Janning finishing with 20 points and six rebounds. Smith added 16 points, five rebounds and five assists, while Gaffney had 13 points and eight boards for Jerusalem, which improved to 2-3.D.J. Cooper scored 27 points for Volgograd, which fell to 1-4.Elsewhere Wednesday, Maccabi Rishon Lezion improved to 2-1 in Group H of FIBA’s Europe Cup, going on a 19-2 run to end the game to claim an 84-70 win over Lukoil Academic Sofia in Bulgaria.Chris Wright led Rishon with 20 points and 10 rebounds, with Darryl Monroe contributing 18 points and seven boards. Zeljko Sakic had 16 points and 11 rebounds for Sofia.Meanwhile, Oded Katash was named as the new coach of Hapoel Eilat on Wednesday, signing a deal until the end of next season following Arik Shivek’s resignation of on Tuesday.Shivek led Eilat to the BSL final last term, but he chose to leave on Tuesday with the team opening this season at 1-4 and the club’s ownership refusing to make changes to the roster. Katash, who was fired by Hapoel Tel Aviv last week following its 1-3 start to the campaign, returns to Eilat after a successful tenure at the club between 2012 and 2014.Katash will already guide Eilat when it visits Maccabi Kiryat Gat (2-3) in BSL action on Thursday. Also Thursday, Bnei Herzliya (2-3) hosts Ironi Nahariya (2-3).