Hapoel had lost five of six games prior to this week, turning up the heat on coach Sharon Avrahami, who replaced the sacked Oded Katash earlier this season. 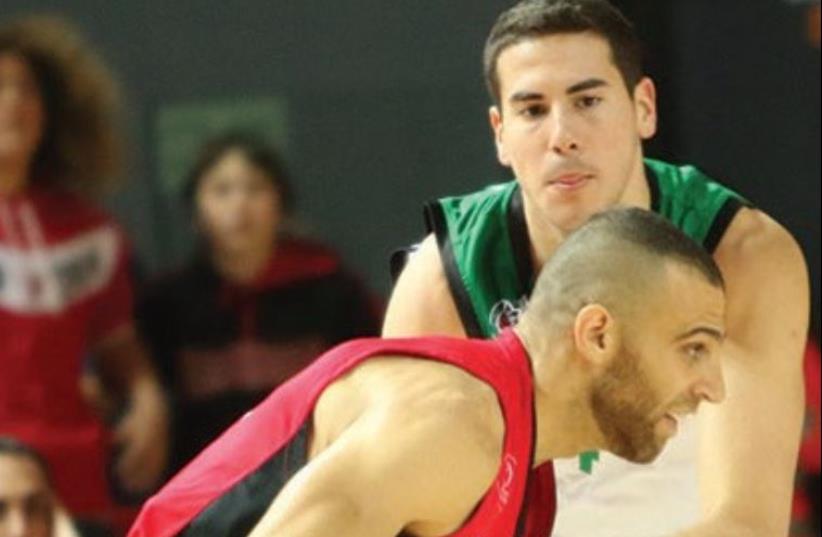 Hapoel Tel Aviv guard Raviv Limonad scored a game-high 18 points in an 85-74 win over Oz Blayzer (14) and Maccabi Haifa at the Drive-In Arena in Tel Aviv, January 5, 2016
(photo credit: ADI AVISHAI)
Advertisement
Hapoel Tel Aviv recorded two straight BSL wins for the first time this season on Tuesday night, beating Maccabi Haifa 85-74 at the Drive-In Arena to improve to 6-9.Hapoel had lost five of six games prior to this week, turning up the heat on coach Sharon Avrahami, who replaced the sacked Oded Katash earlier this season. However, it followed up Saturday’s win over Ironi Nahariya with a convincing victory over Maccabi Haifa to steady the ship.Raviv Limonad led six Hapoel players in double figures with 18 points, with Matan Naor and Talor Battle scoring 15 points each. Will Graves had 14 points for Haifa, which fell to 8-6.“We didn’t play great basketball but we really gave our all,” said Limonad. “We weren’t that good on offense but we did our job on defense.”Bnei Herzliya continued its excellent form on Tuesday, improving to 9-6 with a 95-92 win over Ironi Ness Ziona. Herzlilya has won nine of 12 games, including six of its past eight, with its defeats coming against league leaders Hapoel Jerusalem and Maccabi Tel Aviv.Herzliya opened an early double-digit lead (16-5) with a 14-0 run, but was ahead by only five points at the break (47-42). The hosts looked set to cruise to the victory after leading by as many as 18 points (72-54) in the third period.Ness Ziona slowly ate away at the deficit, but the closest it came would be at the buzzer following Tal Dan’s three-pointer.Drew Crawford led five Herzliya players in double figures with 23 points.“We must have fallen in love with winning tight games,” said Herzliya’s pleased yet frustrated coach Micky Gorka. “We led by 20 but let them back into the game needlessly.”Tal Dan had 22 points and nine rebounds for Ness Ziona, which fell to 5-10.Ironi Nahariya moved above .500 once more with a 78-65 win at Hapoel Eilat. Nahariya improved to 8-7 after leading from start to finish.Michael Umeh finished with 21 points for the winners, with Richard Howell adding 17 points and 18 boards. Khalif Wyatt and Afik Nissim had 12 points each for Eilat, which fell to 6-9.Hapoel Holon remained rock bottom in the standings after being thrashed 94-68 by Maccabi Ashdod. Holon fell to 3-11 with its sixth consecutive loss. Ashdod, which improved to 7-8, was ahead by just three points (45-42) at the interval, but outscored Holon 26-12 in the third quarter and cruised in the final 10 minutes.Charles Thomas scored 24 points for Ashdod, with Isaac Rosefelt netting 23 points for the losers.