Richard Howell had 18 points and 16 rebounds for Nahariya, which improved to 14-11. Robert Rothbart finished with 23 points and 14 boards for Hapoel, which fell to 10-15. 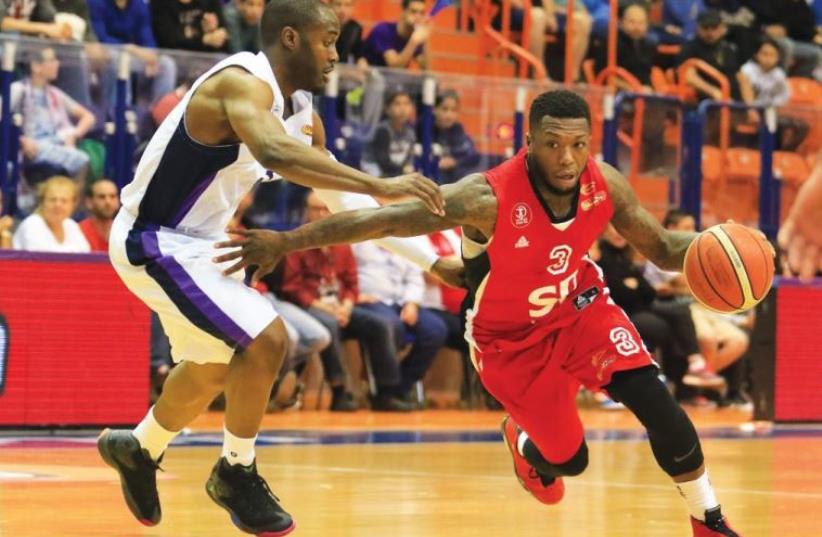 Hapoel Tel Aviv guard Nate Robinson (right) drives past Ironi Nahariya's Michael Umeh (left)
(photo credit: ERAN LUF)
Advertisement
After his dream debut last week, Nate Robinson learned that life in the BSL isn’t always straightforward on Tuesday, fouling out in Hapoel Tel Aviv’s painful 89-88 double-overtime defeat at Ironi Nahariya.The three-time NBA dunk champion scored 25 points in a 103-94 win over Maccabi Rishon Lezion at the Drive-In Arena last week in what was his first game since being waived by the New Orleans Pelicans last October.However, he was held to 17 points at Ein Sara on Tuesday, shooting just 7-of-17 from the field, while missing two decisive opportunities to win the game in the final minute of regulation.He fouled out in the second extra period.The encounter headed to overtime after neither team scored in the last minute of the fourth quarter, and Nahariya should have really already secured its victory at the end of the first extra period. Eran Asenti tied the game with 0.3 seconds remaining, but missed a chance to complete a three-point play from the line and clinch the win. Nahariya nevertheless celebrated at the finish, but only after Tamir Blatt missed an open three-point attempt at the buzzer to the frustration of Hapoel’s traveling support.Richard Howell had 18 points and 16 rebounds for Nahariya, which improved to 14-11. Robert Rothbart finished with 23 points and 14 boards for Hapoel, which fell to 10-15.Maccabi Kiryat Gat claimed a significant win in its fight for survival on Tuesday, beating Hapoel Eilat 77-76 after a dramatic finish.Nimrod Tishman’s basket with 11 seconds to play capped a 13-2 Kiryat Gat run that gave the hosts a one-point edge. That also proved to be the go-ahead basket, with Eilat coaches and players furious with the officials for not spotting what they believed was a goaltending offense by Kiryat Gat’s Marco Killingsworth on Amit Simhon’s shot at the buzzer.Alando Tucker finished with 21 points for Kiryat Gat, which improved to 9-16. Khalif Wyatt scored 19 points for Eilat, which fell to 12-13.“The ball was heading towards the basket and Killingsworth wasn’t allowed to touch the ball. That is goaltending and we should have won the game,” said Eilat coach Oded Katash.“But I’m also frustrated because we kept allowing Kiryat Gat back into the game. We self-destructed. We played awfully, but it should have been enough to win and this is very frustrating. This is a game which could decide our season.”Also Tuesday, Bnei Herzliya claimed an easy 103-79 win over the struggling Ironi Ness Ziona.The hosts outscored Ness Ziona 25-13 in the first quarter and maintained control until the final buzzer. Karam Mashour led six Herzliya players in double- figures with 16 points, while Fuquan Edwin had 12 points for rock-bottom Ness Ziona, which fell to 7-18, losing its sixth straight game.Herzliya moved up to fourthplace at 14-11, one game back of Maccabi Haifa in third. Haifa squandered a golden opportunity to join the race for the No. 1 seed in the playoffs on Monday, losing 95-89 in overtime to Hapoel Jerusalem. Haifa missed a chance to win the game with the final possession of regulation and Jerusalem pulled ahead in the final minute of the extra period to secure its fourth straight victory, improving to 19-6 to maintain its hold on first place, two games ahead of Maccabi Tel Aviv.