Hapoel back into the top four; Eilat strengthens hold on first with comeback victory over Hap TA. 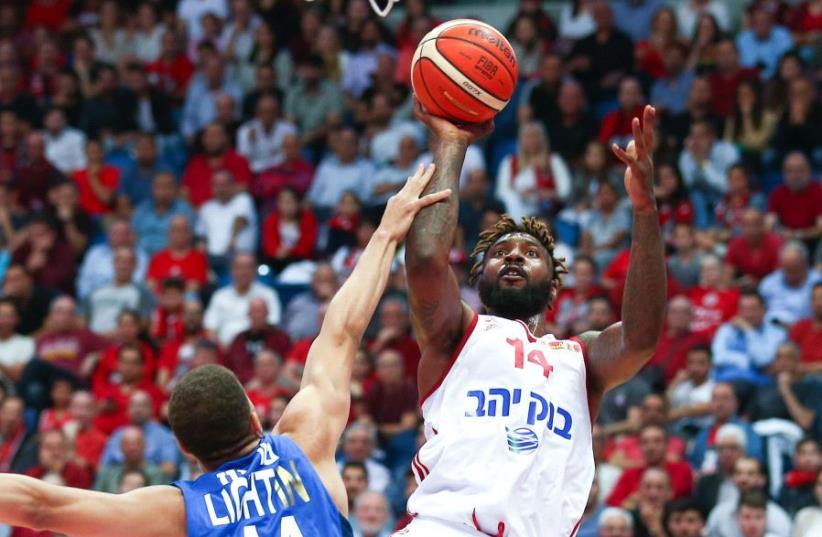 Hapoel Jerusalem’s Richard Howell
(photo credit: DANNY MARON)
Advertisement
Even a 19-point deficit couldn’t prevent BSL leader Hapoel Eilat from claiming another win on Thursday night, while Hapoel Jerusalem moved back into the top four thanks to a fourth-quarter surge against Bnei Herzliya.Eilat trailed Hapoel Tel Aviv 31-12 in the second period and remained on the back foot throughout the first three quarters.But Oded Katash’s team wouldn’t be denied, dominating the final 10 minutes to improve to 19-10 with a seventh straight victory.Eilat triumphed for the 13th time in its past 15 games, extending its home winning streak to nine games, a run stretching back to last December.Will Daniels scored 18 points for Eilat, while veteran Israeli guard Afik Nissim netted 16 in 10 minutes.Mark Lyons had 16 points for Hapoel, which fell to 13-16 with a fourth straight loss, leaving it in a two-game deficit in the battle for a place in the playoffs with four games to play.Maccabi Rishon Lezion and Ironi Nahariya took a significant step towards a top-eight finish by improving to 15-14 with victories.Rishon extended its season- best winning streak to four games with an 83-69 victory over Hapoel Gilboa/Galil (12-16). Rishon outscored Gilboa 20-1 in the first six minutes and survived a late scare, with the visitors cutting the gap to six points (64-58) in the fourth quarter with a 13-0 run, but coming no closer.J.J. Moore led Rishon with 19 points, while Eric Griffin scored 18 points for Gilboa.Nahariya won for the sixth time in its past seven games, defeating Maccabi Ashdod 75-68. A 10-0 fourth-quarter run put Nahariya in control, giving it an eight-point gap (71-63) it wouldn’t squander.Scottie Hopson netted 18 points for Nahariya, with Chase Simon scoring 26 for Ashdod.After combining two straight wins in the BSL for the first time in almost three months, Hapoel Jerusalem made it three in a row on Thursday, moving to 16-13 with an 84-82 victory over Bnei Herzliya (16-13).Jerusalem leapfrogged Herzliya by claiming the head-to-head tiebreaker, winning for the sec-ond time in their three regular season meetings.A top-four finish could prove to be especially significant as it leads to home-court advantage in the quarterfinal playoffs.Herzliya controlled the first half, taking a 10-point lead (44- 34) into the break. An 11-1 run in the fourth quarter gave Jerusalem a 69-61 advantage, but Taurean Green tied the score at 71-71 with a three-pointer with just un-der two minutes to play.But Curtis Jerrells saved his team in the clutch once more for a crucial regular season win.Jerusalem’s new center Richard Howell led the team with 19 points in 13 minutes, with Jerrells scoring 18. Jeff Adrien had 21 points for Herzliya.