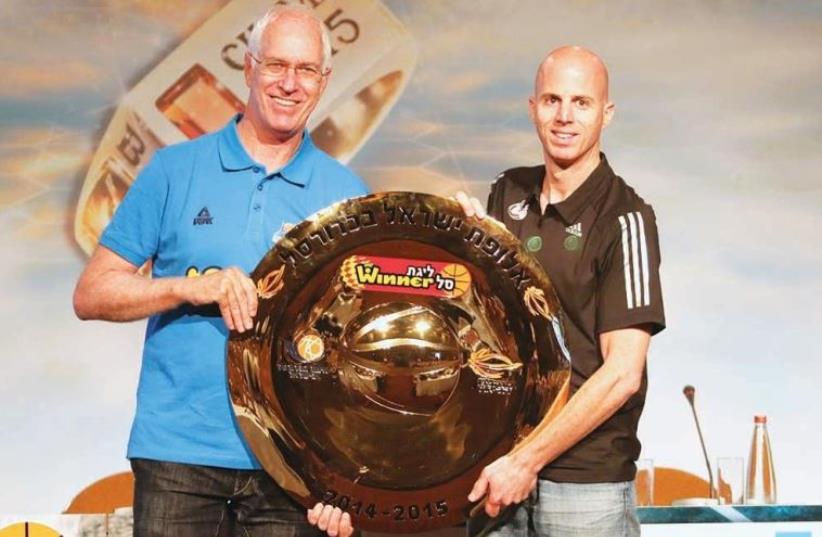 Hapoel Eilat coach Arik Shivek and Hapoel Jerusalem coach Danny Franco
(photo credit: ADI AVISHAI)
Advertisement
It seems safe to say that Hapoel Jerusalem will never have a better opportunity to win its first BSL championship.Everything looks to have fallen into place for the six-time runner-up.Not only has Hapoel won 21 of its past 23 regular season and playoff games over the past five months, but it has hit peak form when it matters most.Jerusalem would have been a favorite in the final even had it been facing perennial champion Maccabi Tel Aviv, not to mention its eventual opponent Hapoel Eilat, which stunned the yellow-and-blue in the semis.Eilat hosts Game 1 of the home-and-away aggregate final on Monday, with the second leg to be played in Jerusalem on Thursday.While Jerusalem swept Hapoel Tel Aviv and Maccabi Rishon Lezion in the playoff quarterfinals and semifinals, Eilat had to endure five-game series against both Maccabi Haifa and Maccabi Tel Aviv and has played four more games than Jerusalem over the past month.Jerusalem is considered to be Maccabi’s main local rival, but it will be playing in its first final since 2007 this week after falling short of expectations time and again in recent years.Eilat is making its second appearance in the final, a first since losing to Maccabi in 1998.Jerusalem beat Eilat in three of four meetings this season, including a thrashing in the State Cup semifinals.Jerusalem coach Danny Franco is well aware of the fact his team is the one under all the pressure, but he believes his players are ready for the final.“Our team has really matured throughout the season. This isn’t the same team as the one from September or November,” said Franco, who suffered an agonizing defeat to Maccabi Tel Aviv in last season’s final as the coach of Maccabi Haifa.“We have come a long way and have been through a lot. This is the final week of the season and everyone understands that they have to make one last effort.”Eilat coach Arik Shivek, who only replaced Dan Shamir in mid-February when the team was sitting in seventh place in the standings with a 9-10 record, is optimistic his team can prove the doubters wrong once more.“When we began the playoff everyone said Haifa would beat us 3-0 and no one gave us a chance when we trailed Maccabi Tel Aviv 2-0,” said Shivek, whose team ended Maccabi’s 20-year run of at least reaching the final.One of the key match-ups in the final will be between Israel national team teammates Lior Eliyahu of Jerusalem and Elishay Kadir.Eliyahu has averaged 13.5 points and 5.7 rebounds in the playoffs to date, with Kadir enjoying success against Jerusalem so far this season, averaging 16.5 points in their four meetings.“Maccabi Tel Aviv may be a better team than Eilat, but Eilat is currently in better form and will be coming in with a lot of confidence,” said Eliyahu. “Anything can happen over two games.”