Basketball: Jerusalem in crisis mode after yet another humbling defeat 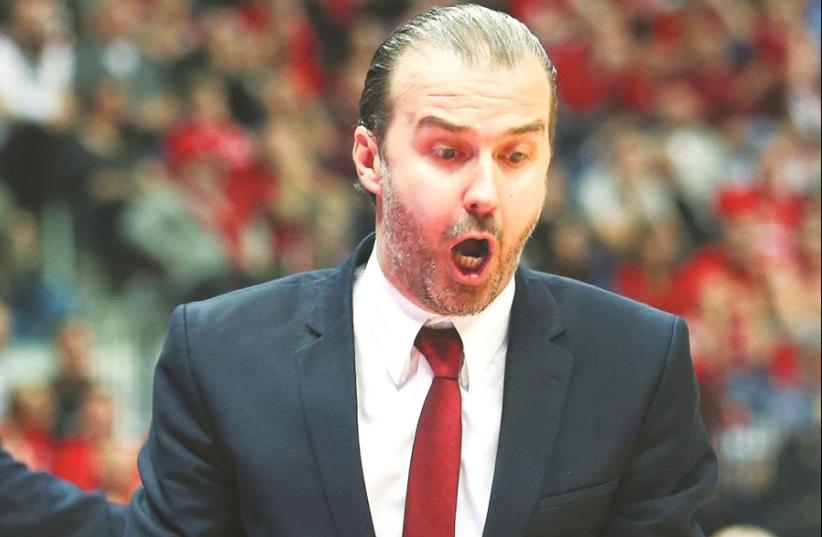 Hapoel Jerusalem coach Simone Pianigiani
(photo credit: DANNY MARON)
Advertisement
Hapoel Jerusalem’s BSL losing streak reached three games on Saturday, further complicating the team’s position in the standings ahead of the final stretch of the regular season.Jerusalem’s 92-74 defeat at Maccabi Ashdod saw it fall back to .500 (13-13), two games back of a place in the top four and home-court advantage in the quarterfinal playoffs. Hapoel has still got work to do to simply qualify for the playoffs, sitting only 1.5 games ahead of ninth place.Jerusalem’s new signing Alessandro Gentile arrives in Israel on Sunday, but the side’s problems won’t be solved by a single player, with Simone Pianigiani’s team looking disinterested and disjointed over the past couple of weeks since it was knocked out by Valencia in the semifinals of the Eurocup.“We are in a big crisis now,” said Pianigiani. “When we started missing open shots it became an up-tempo game and we were out of balance and we started to panic. The players don’t understand that we are fighting for a position in the playoffs.”Chase Simon scored 27 points for Ashdod, which improved to 10-16.Curtis Jerrells had 14 points for Jerusalem, which hosts Maccabi Tel Aviv next Saturday.On Sunday, Maccabi Tel Aviv looks to return to first place when it hosts Hapoel Eilat at Yad Eliyahu Arena. Maccabi has lost five straight games over all competitions, its longest streak of the season. Last Thursday’s 20-point humbling at the hands of Panathinaikos in its final Euroleague game of the campaign was its heaviest home defeat of the season, with the yellow-and-blue also falling to Hapoel Holon in its most recent BSL game at Yad Eliyahu two weeks ago.Holon climbed to first place in the standings with an 18-8 record after beating Bnei Herzliya 79-75 on Thursday. Maccabi will move back ahead of Holon on a tiebreaker with a victory on Saturday.Eilat can move within one game of Maccabi with a win on Sunday, after recovering from a slow start to the season by claiming nine wins from its past 11 games to move to 15-10.A season after winning an historic championship, Maccabi Rishon Lezion is in danger of missing out on the playoffs, entering Sunday’s game against Maccabi Kiryat Gat one game back of a place in the top eight.Also Sunday, Hapoel Gilboa/ Galil, which is tied with Rishon at 11-14, hosts Maccabi Haifa (13- 12), while Hapoel Tel Aviv (13-12) welcomes Ironi Nahariya (12-13).