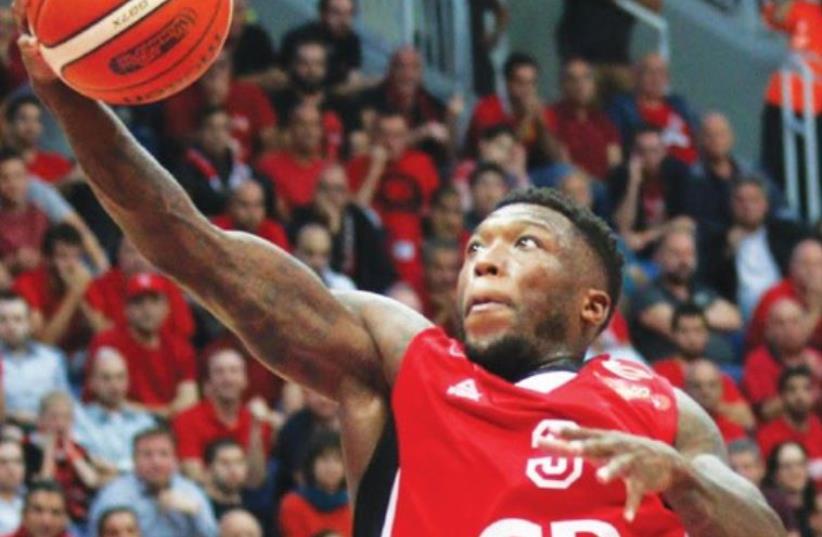 Hapoel Tel Aviv guard Nate Robinson
(photo credit: DANNY MARON)
Advertisement
Defending champion Hapoel Jerusalem took a 1-0 lead in the BSL best-of-five quarterfinal series against Hapoel Tel Aviv on Thursday night, surviving Nate Robinson’s remarkable 46-point performance to claim a 99-97 overtime victory.Tel Aviv led by nine points with six minutes to play, but needed Robinson to force overtime with his layup with 3.5 second remaining in regulation.However, he couldn’t clinch the win by himself and Jerusalem eked out the victory thanks to Eli Holman’s basket with 3.7 seconds to play in overtime. E.J. Rowland led Jerusalem with 19 points.Also Thursday, No. 2 Maccabi Tel Aviv edged No. 7 Bnei Herzliya 76-75, No. 3 Maccabi Haifa suffered a 71-69 home defeat to No. 6 Maccabi Rishon Lezion and No. 5 Hapoel Eilat beat No. 4 Ironi Nahariya on the road 82-75.In Tel Aviv, the hosts led almost from start to finish, but had to survive a scare in the final minute. James Singleton’s three-pointer with 18 seconds to play brought Herzliya within a single point, but after Yogev Ohayon hit both of his shots from the line, Drew Crawford missed a chance to tie the score from beyond the arc and Maccabi held on.Sylven Landesberg had 21 points for Maccabi, with Itay Segev finishing with 11 points and 14 rebounds. Singleton led Herzliya with 17 points and 11 boards.The game in Haifa was also tight until the final buzzer, with two late three-pointers by Mark Lyons ultimately making the difference.Lyons finished the game with 23 points, with Will Graves scoring 20 points for Haifa.The game in Nahariya was marred by unsporting scenes in the closing seconds. With Nahariya trailing by five points with 15 seconds to play, the hosts believed Oded Brandwein had been fouled while attempting a shot from three and were furious when no call was made.Coach Eric Alfasi was ejected after receiving two technicals while club chairman Nissim Alfasi rushed onto the court and confronted the officials before being pulled back.Afik Nissim finished with 28 points for Eilat while Gilbert Brown had 22 for Nahariya.“We had a lot of letdowns and they took advantage,” said Maccabi Tel Aviv’s Sylven Landesberg. “We played better in the second half, but we need to clear up a lot of things ahead of the second game.”Nahariya coach Alfasi was extremely disappointed.“There were some very strange officiating calls and someone needs to look into it,” he said.Rishon boss Arik Shivek is expecting the rest of the series against Haifa to be tight as well.“This was a typical playoff game with many ups and downs but we deserved to win,” said Shivek. “This is going to be a very tight series and this game could have also gone either way. Fortunately for us, luck was on our side.”