Israeli champion’s win against Volgograd along with Novgorod victory sends Hapoel into Last 32. 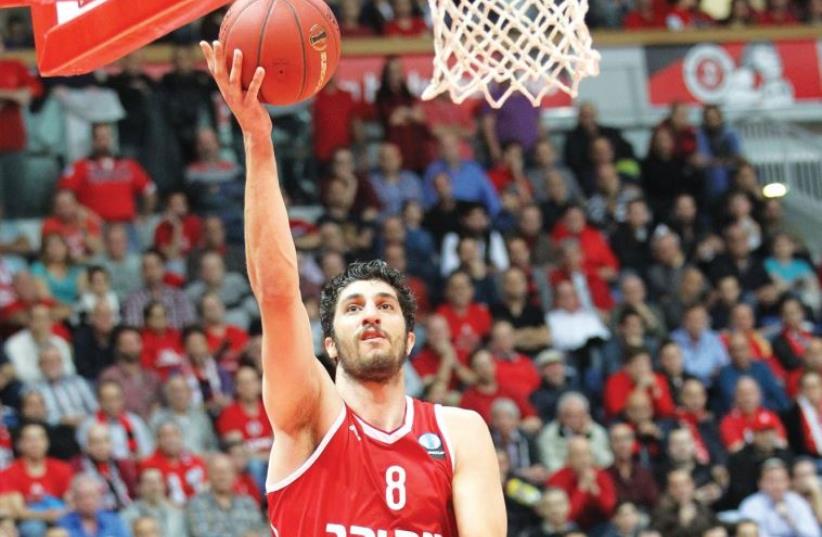 Hapoel Jerusalem forward Lior Eliyahu
(photo credit: DANNY MARON)
Advertisement
Hapoel Jerusalem is back in the Eurocup Last 32 after defeating Krasny Oktyabr Volgograd 95-74 in Russia on Wednesday night for its third straight win, completing its recovery from a 2-5 start to the regular season.The Israeli champion found itself on the verge of an early exit for a second straight season, but it stayed alive by claiming two impressive home wins over Galatasaray and AEK Athens and capped its comeback with an easy victory in Russia and a little help from Nizhny Novgorod.With AEK beating Neptunas Klaipeda 75-71 in Greece, Jerusalem could have found itself on the wrong end of a three-way tie at 5-5 had Nizhny lost to Galatasaray. However, a late 18-2 Novgorod run gave the Russians a dramatic 81-75 victory and ensured Jerusalem advanced from fourth place in Group F, finishing tied with AEK at 5-5 but ahead of the Greeks on a head-to-head tiebreaker.“We had no idea what was happening in Novgorod until our game ended and this is true joy,” said Jerusalem coach Danny Franco, who carries the scars of last year’s humbling regular season campaign. “This game was mental more than anything else. It isn’t easy to play in front of an empty arena in a game you must win.I’m really happy with this win and with our recent form. We got a monkey off our backs as many of the guys were also here last season and that was sitting in the back of our minds. We will do our best in the next round and we know we will have to play better than we have until now.”Despite Volgograd being in disarray, releasing its three American players and losing its previous eight games, Jerusalem only held a four-point lead (23-19) after 10 minutes, looking far too relaxed against a clearly inferior opponent.The visitors finally pulled ahead in the second period, with a 13-3 run to end the first half, including three triples over a 40-second stretch in the final two minutes, opening a 15-point cushion (51-36).Hapoel allowed Volgograd within seven points, but no closer, and celebrated after receiving the news from Novgorod.D’or Fischer led five Jerusalem players in double figures with 18 points, with Lior Eliyahu adding 16 points, nine rebounds and six assists and Josh Duncan contributing 15 points and seven boards for Hapoel, which registered its sixth straight win over all competitions and first road victory in the Eurocup this season.Maks Adam Konate had 18 points and 10 rebounds for Volgograd.The Last 32 will begin in the first week of January and run until February 10. Jerusalem will play in a four-team group, with the top two to advance to the round of 16.“We had a very erratic regular season,” admitted Franco. “But that is behind us now and I’m happy that we have the Last 32 to look forward to.”Elsewhere Wednesday, Maccabi Rishon Lezion got the Europe Cup Round of 32 off to a losing start, falling 79-76 at Novo Mesto in Slovenia.Rishon, which also faces ASVEL Basket Villeurbanne of France and Kataja of Finland in Group O, was neck-and-neck with the hosts throughout the game, but couldn’t eke out a road win and also lost Chris Wright to a shoulder injury.Mark Lyons led Rishon with 22 points, with Darryl Monroe adding 17 points and 10 rebounds. Stefan Sinovec scored 17 points for the winners.“We may have lost the game in the final minute, but we are pleased with the way we played and we hope to build on that in our next game against Hapoel Eilat,” said Rishon coach Sharon Drucker.