Jerusalem fought until the final second of the Eurocup regular season in order to secure its progress after failing to do so the previous season. 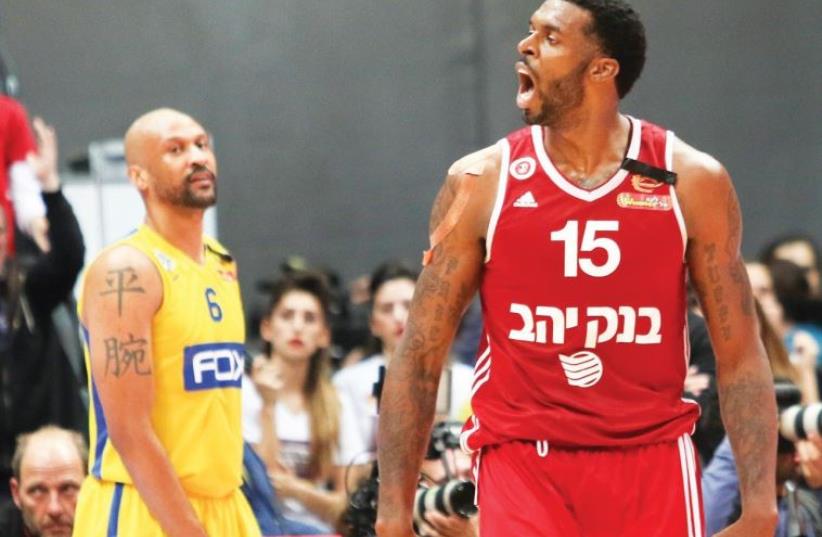 Hapoel Jerusalem forward Donta Smith (right) and Maccabi Tel Aviv swingman Devin Smith (left)
(photo credit: DANNY MARON)
Advertisement
Hapoel Jerusalem and Maccabi Tel Aviv enter their Eurocup Last 32 campaigns on Wednesday in distinctively different moods.It is not only that Jerusalem beat Maccabi 94-85 in BSL action at the Jerusalem Arena on Sunday to take sole possession of first place in the standings. Perhaps even more significantly, the contrasting courses which both teams took to reach the Last 32 will have a dramatic effect on the way they approach the remainder of their continental campaigns.Jerusalem fought until the final second of the Eurocup regular season in order to secure its progress after failing to do so the previous season.Maccabi, on the other hand, was sent to play in the Eurocup’s second group stage after failing to qualify for the Euroleague Top 16 for the first time ever.Nevertheless, just like Hapoel, Tel Aviv is aiming to make the best of the situation, starting with qualifying for the round of 16.Jerusalem begins its Group H campaign at Avtodor Saratov in Russia on Wednesday, while Maccabi hosts Olimpija Ljubljana in Group M at Yad Eliyahu Arena.Jerusalem also faces Gran Canaria of Spain and Strasbourg of France. The yellow-and-blue’s group also includes Russian teams Unics Kazan and Nizhny Novgorod.The Last 32 will feature eight groups of four teams, with the best two teams from each group to advance to a two-game, head-to-head, home-and-away aggregate series.The quarterfinals, semifinals and finals will also all be played in the same format.Despite playing without D’or Fischer and Tony Gaffney, Jerusalem looked great in the win over Maccabi, and will be confident of building on that form against Saratov. The Russians went 7-3 in the regular season, averaging a Eurocup-high 94.7 points per game, as well as scoring 113 triples and averaging 21.3 assists.Maccabi had won nine straight games over all competitions before losing in Jerusalem and coach Zan Tabak was furious with his team’s performance, especially on defense.“Obviously I’m disappointed because we lost, but I’m more disappointed with the way we played,” he said. “We didn’t play the way we practice and didn’t play the way we wanted to and that is the worse part of this loss. To say we were not at our best is an understatement and I have no idea way.”Ljubljana went 5-5 in the Eurocup regular season and coach Gasper Potocnik believes his team will be a firm underdog in the group.“All the teams are big names of European basketball. Every victory will be as big as Mount Everest for us,” said Potocnik.“Maccabi’s season is not going by the plans, but they have a great team with very good individuals. They play good basketball, even though they did not advance to the Euroleague Top 16. They lost to Hapoel in their last game, and that’s why I believe they will be even more fired up against us.“We have a difficult task ahead of us, and it will be very important for us to play controlled, especially on offense,” he added.“Maccabi plays full-court defense and they use the opponents’ turnovers for easy fast breaks. We need to give our best also on defense and rebounding.”Tabak also stressed the importance of dictating the pace of the game.“Jerusalem forced their rhythm and I need to analyze why this is happening to us,” said Tabak. “The same thing happened against Darussafaka in our decisive Euroleague game. We play to the pace of the other team and in 90 percent of the times when that happens we will lose so we have to find a solution for that.”Elsewhere on Wednesday, Maccabi Rishon Lezion hosts ASVEL Basket Villeurbanne of France in its second game in the Europe Cup Round of 32. Rishon lost 79-76 at Novo Mesto in Slovenia in its opener.