Basketball: Jerusalem up and running in Eurocup

After suffering humbling defeat in opener, Hapoel beats Neptunas at home to improve to 1-1. 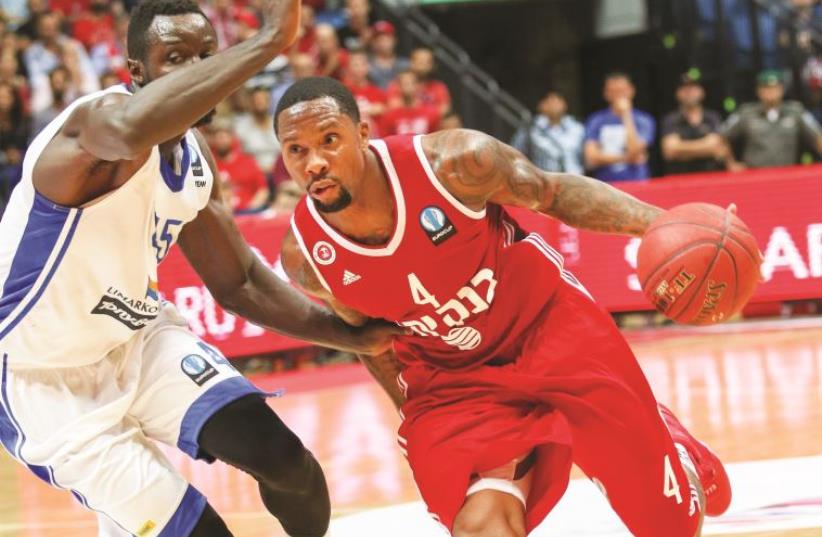 Hapoel Jerusalem guard E.J. Rowland
(photo credit: DANNY MARON)
Advertisement
Hapoel Jerusalem kick-started its Eurocup campaign with a comfortable 74-59 victory over Neptunas Klaipeda of Lithuania at the Jerusalem Arena on Wednesday night, finally impressing on defense after being blown out in its group opener last week.Hapoel suffered a humbling 92-71 loss to Nizhny Novgorod in Russia last week, but proved on Wednesday that it is capable of playing defense at the level required to succeed in continental competition.Jerusalem suffered an embarrassing exit in the Eurocup regular season last year, registering a 2-8 record. It allowed 82.7 points per game, the fourth-worst from 36 teams, and knew it would have to improve its defensive play to have any chance of making amends this season.Hapoel held Neptunas to 40 percent from two-point range (12-of-30) and 31 percent (9-of-29) from beyond the arc, while also forcing 20 turnovers.“We defended superbly,” said Jerusalem coach Danny Franco. “It was very important for us to play like this today. I’m really proud of my team. We won the game with defense and rebounding and If we can maintain this spirit we will continue to progress as a team.”E. J. Rowland was superb for Jerusalem with 17 points, five assists and five rebounds, orchestrating the team’s play. Donta Smith had 16 points, seven boards and six assists, while D’or Fischer scored 11 points. Matt Janning, who was brought in to replace Bracey Wright, ended the night scoreless.Janning will be hoping for an improved performance when Jerusalem visits Maccabi Tel Aviv in BSL action on Sunday night before traveling to Istanbul to face Galatasaray in Eurocup action. Galatasaray improved to 2-0 on Wednesday with an 89-65 win over AEK Athens.Travis Bader netted 17 points for Neptunas, which fell to 0-2.Jerusalem scored 10 of the final 13 points of the first period on Wednesday to establish a six-point gap (22-16), with Smith capping the run with a three-point play.Bar Timor’s basket took the margin to double figures (29-18), but the visitors remained within striking distance at the break, with Mindaugas Girdziunas hitting a mid-court shot at the buzzer to cut the deficit to 36-30.However, the momentum remained with Jerusalem in the second half, with Lior Eliyahu taking the lead to 12 points (45-33). Neptunas closed to within six points once more (47-41), but Hapoel wouldn’t allow it any closer. A 10-3 surge to end the third period opened a 13-point gap (57-44), only for the Lithuanians to close back within seven points (58-51) and force Franco into calling a timeout.Jerusalem responded by going on a 12-3 run and there would be no way back for the Lithuanians.In other basketball news, Maccabi Rishon Lezion announced the signing of Romero Osby on Wednesday, a day after releasing Derrick Byars.Rishon is one of just three teams to open the BSL season at 2-0 along with Maccabi Tel Aviv and Hapoel Jerusalem, but Byars struggled to settle at the club, being released after playing just nine combined minutes in Rishon’s two games. Osby was recently released by JSF Nanterre of France.Rishon hosts Maccabi Kiryat Gat in BSL action on Sunday before beginning its European campaign in Group H of FIBA’s new Europe Cup against BC Kalev of Estonia next Wednesday. Rishon will also face Enisey Krasnoyarsk of Russia and PBC Lukoil Academic of Bulgaria, with the top two from each group to advance to the next stage.56 teams from across Europe will compete in the new European FIBA club competition, of which 17 are current national champions and a further 13 were runners- up in their respective domestic championships last season.The teams were geographically drawn into two conferences which also took into account the number of participating teams from each nation.Each conference consists of seven groups of four clubs each. Each club will play the remaining three in their group in a homeand- away format with the top two teams from each group, along with the four bestplaced third place teams advancing to the Round of 32.