Interim coach Even debuts for yellow-and-blue in crucial Euroleague contest at home against Darussafaka. 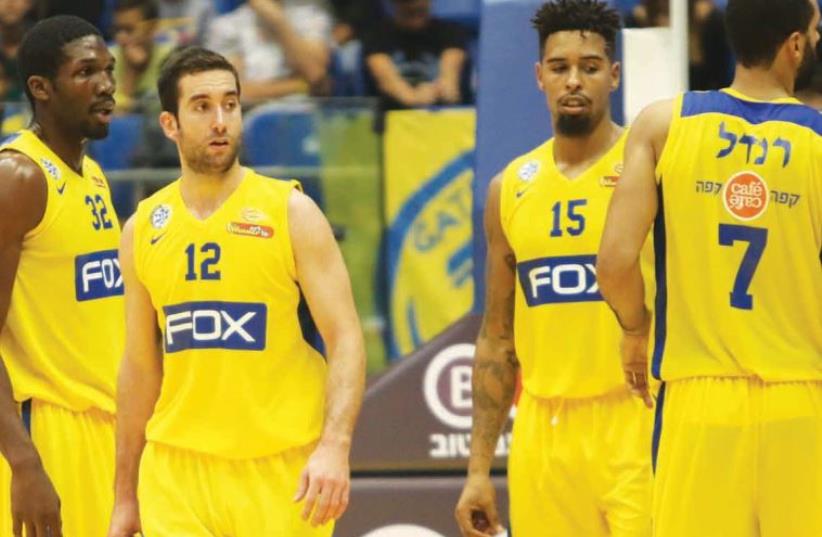 From left, Maccabi Tel Aviv's Trevor Mbakwe, Yogev Ohayon, Sylven Landesberg, Brian Randle
(photo credit: ADI AVISHAI)
Advertisement
Maccabi Tel Aviv could hardly be entering Thursday’s crucial Euroleague showdown with Darussafaka Istanbul at Yad Eliyahu Arena in a worse position.Head coach Guy Goodes was sacked on Monday following a humbling BSL defeat to Maccabi Ashdod, which came on the back of a road loss in Germany to Brose Baskets Bamberg that saw the yellow-and-blue fall to 1-3 in the Euroleague regular season for the first time in 17 years.Avi Even, an assistant coach who worked as a scout until last season, will be guiding the team on Thursday, with Maccabi desperate for a win that will at least leave it well-placed to finish in fourth position in Group D, which is still good enough to advance to the Top 16.With Israel national team coach Erez Edelstein turning down an approach from Maccabi, the yellow-and-blue is focusing on bringing in a foreigner.Zan Tabak, who currently coaches Fuenlabrada in Spain, Iran coach Dirk Bauermann of Germany, Bosnia coach Dusko Ivanovic, Lithuania national team coach Jonas Kazlauskas and Italy coach Simone Pianigiani have all been mentioned in connection with the vacancy.“Guy gave me his blessing and wants me to do everything possible ahead of Thursday’s game,” said Even. “Clearly this isn’t a simple situation. I was asked to guide the team until a new coach is found and I will give 100 percent. Our goal is clear. We need to win on Thursday.”Maccabi is last in the Euroleague in steals (3.0 spg) and just 19th in defensive rebounds (22.5 drpg), two aspects it will need to improve on to return to winning ways on Thursday.“We need to look ourselves in the mirror and decide how we will be entering Thursday’s game,” said captain Guy Pnini. “Something needs to change in our attitude. It is unacceptable that we are losing so many games at home in front of our fans.”Darussafaka also enters Thursday with a 1-3 record, losing its past three games after beating Dinamo Banco di Sardegna Sassari in its opener.“Maccabi is traditionally a strong club but they’ve been through a difficult period,” said Darussafaka coach Oktay Mahmuti.“They changed the head coach and generally those kind of changes may cause a positive shake-up within the team. We will go about our own business and try to get a win on the road.”Maccabi at least received some good news ahead of the clash with Darussafaka after the Euroleague announced its new format starting from next season on Tuesday night.Maccabi’s Euroleague future is secure for at least another decade, with its income from the competition set to mushroom after a new Euroleague competition model was agreed upon in Barcelona.The 11 clubs that currently possess A licenses in the Euroleague – Anadolu Efes Istanbul, CSKA Moscow, Armani Milan, FC Barcelona, Fenerbahce Istanbul, Laboral Kutxa Vitoria, Maccabi Tel Aviv, Olympiacos Piraeus, Panathinaikos Athens, Real Madrid and Zalgiris Kaunas – agreed on a new league format, which will include 16 teams: 11 permanent franchises (potentially expandable in the future), a berth for the Eurocup champion, three direct-access spots for domestic league champions and one place for the winner of qualifying rounds featuring eight teams.The 16 teams will compete in a round-robin regular season of 30 rounds, to be followed by best-of-five playoffs, with series winners advancing to the Final Four, at which the continental champion will be crowned.The Eurocup will also undergo changes, with 24 teams to participate from next season – 21 with access through domestic leagues and three wild card invitations.They will play in an almost identical format to the one currently being used in the Euroleague.A 10-round regular season will be followed by a 14-round Top 16, two-game quarterfinal and semifinal home-and-away series, concluding with the championship game.