Yellow-and-blue beat Maccabi Ashdod 83-75 to bring some cheer to the club in the midst of one of its worst seasons ever. 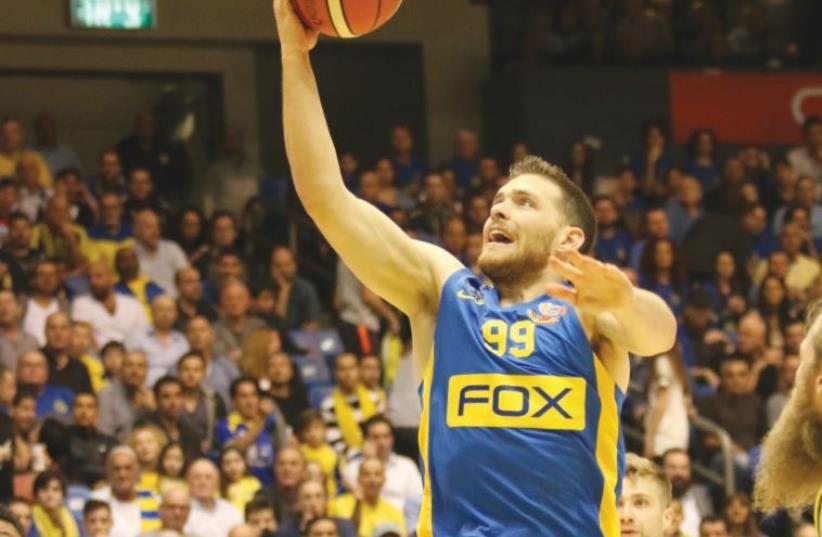 Maccabi Tel Aviv guard Gal Mekel
(photo credit: ADI AVISHAI)
Advertisement
Even when all else fails, it seems Maccabi Tel Aviv always has the State Cup.Maccabi won its seventh straight cup at Yad Eliyahu Arena on Thursday night, beating Maccabi Ashdod 83-75 to bring some cheer to the club in the midst of one of its worst seasons ever.The yellow-and-blue entered this week on the back of yet another dejecting failure, being knocked out of the Eurocup after also suffering a humbling exit in the Euroleague earlier this season. It dropped to defeats in its three previous games, including by a club-record 35 points to Maccabi Haifa in the BSL, yet somehow, Maccabi yet again found a way to win in the cup.The yellow-and-blue’s last cup defeat came in December 2008 when it was stunned by Ironi Nahariya in the round of 16.Maccabi was on course for an early cup exit this season, trailing by 14 points with seven minutes to play in its quarterfinal against Maccabi Haifa.However, it ended the night with a 19-2 run and clinched its progress with a dramatic 73-70 victory thanks to Taylor Rochestie’s three-pointer with 0.4 seconds to play.Maccabi led by as many as 22 points (50-28) in the second period on Thursday, but Ashdod fought back and closed within two points midway through the fourth quarter. However, Devin Smith, who was a major doubt for the final due to injury, came to his team’s rescue in its hour of need, scoring seven crucial points to secure Maccabi a 43rd cup in club history.Gal Mekel led Maccabi with 21 points, six assists and five rebounds, with Smith and Sylven Landesberg scoring 14 points each.Charles Thomas had 30 points for Ashdod, which was playing in its first cup final.Ashdod coach Tzvika Sherf was coaching in a record-tying 14th final, but he hasn’t won the cup in 22 years, losing in the title decider for a sixth consecutive time.Tel Aviv opened an early lead thanks to accurate shooting from beyond the arc. Rochestie’s second straight three-pointer made it 14-8, with another triple by Mekel extending the gap to eight points (24-16), a margin Maccabi took into the second period.Yogev Ohayon’s basket from beyond the arc to start the second frame took Maccabi to 5-of-7 from distance and the lead into double-digits for the first time, but Tel Aviv wasn’t done.Five consecutive points by Guy Pnini increased the cushion to 20 points before Trevor Mbakwe made it 50-28 with 2:15 to play in the quarter. Ashdod still had some hope entering the second half though, ending the first half with a 10-0 run to close within 12 points, with Thomas scoring six points in the surge to take his personal tally to 21 points.Ashdod committed 14 turnovers in the first half, but momentum remained on its side at the start of the third quarter, with a Thomas three cutting the deficit to six points (57-51) midway through the frame.Maccabi struggled to get anything going on the offensive end and Ashdod moved within four points (59-55) before entering the final 10 minutes down by six points (65-59).Jonathan Skjoldebrand’s three made it a three points game early in the fourth period (67-64) and gap was down to a mere two points (71-69) after two more free throws from Thomas with 2:28 minutes to play.Ashdod would come no closer though, with Smith carrying his team over the finish line to clinch a sweet triumph.