Maccabi will pay a buyout estimated at around 100,000 euros to release the 45-year-old former NBA center from his contract at Montakit Fuenlabrada of the Spanish league. 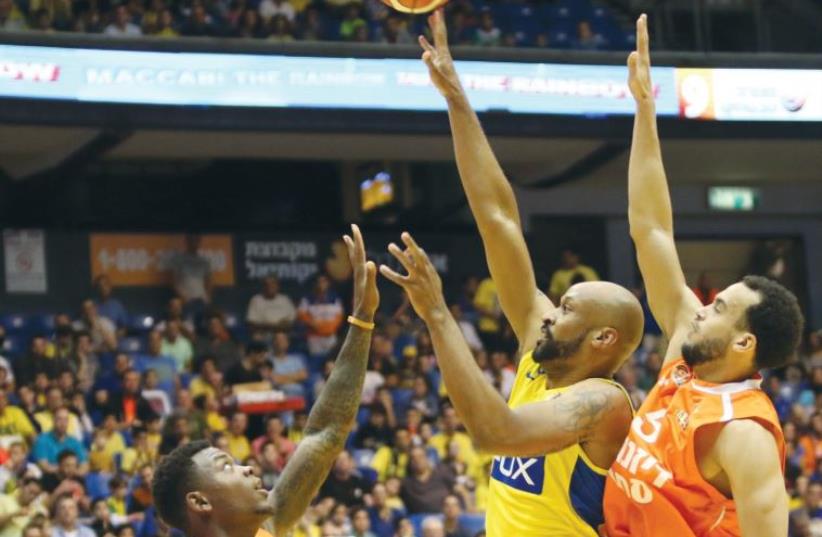 Maccabi Tel Aviv forward Devin Smith (center) attempts a shot during his team's win over Ironi Ness Ziona at Yad Eliyahu Arena
(photo credit: ADI AVISHAI)
Advertisement
Croatian Zan Tabak is set to be named as the new head coach of Maccabi Tel Aviv, which finally returned to winning ways on Saturday night with an 89-74 victory over Ironi Ness Ziona in BSL action at Yad Eliyahu Arena.Maccabi will pay a buyout estimated at around 100,000 euros to release the 45-year-old former NBA center from his contract at Montakit Fuenlabrada of the Spanish league, which he only joined this past summer.After a successful playing career which included three consecutive European titles at Split and stints at the Houston Rockets, Toronto Raptors, Boston Celtics and Indiana Pacers, Tabak moved into coaching in 2006 as an assistant at Real Madrid. He has experience at taking over a struggling side mid-season after joining Laboral Vitoria in November 2012 and leading the team on a 17-game winning streak in the Euroleague and Spanish league, reaching the quarterfinals of the Euroleague.However, his contract wasn’t extended and he returned to Real Madrid as an assistant before leaving for Fuenlabrada.Tabak will sign a contract until the end of next season, with Maccabi having an exit clause at the end of this season for an unknown sum.Maccabi is hoping Tabak will already be able to guide the team in Thursday’s Euroleague game against CSKA Moscow at Yad Eliyahu, with the yellowand- blue on the verge of failing to qualify for the Top 16 for the first time ever.Maccabi fell to 1-4 in Group D following an 84-73 defeat to Darussafaka Istanbul at Yad Eliyahu on Thursday in assistant coach Avi Even’s first game at the helm following the sacking of Guy Goodes three days earlier.Even at least helped Maccabi get back on track in the BSL on Saturday, with the yellow-and-blue improving to 4-2 with the win over Ness Ziona (2-4).Tel Aviv held a 19-16 edge after 10 minutes before going on a 13-0 run in the second quarter, opening a 15-point gap (47-32).Ness Ziona closed within three points (64-61) late in the third frame, but Maccabi replied with a 21-5 surge (85-66) to clinch the win.Arinze Onuaku finished with 17 points and eight rebounds for Maccabi, with Devin Smith adding 12 points and five assists.Brian Randle missed the game with a concussion, with Jordan Farmar and Sylven Landesberg both healthy scratches.Fuquan Edwin finished with 21 points for Ness Ziona.“This was a very very important win,” said Even, who will coach the team at least once more when the yellow-and-blue visits Maccabi Rishon Lezion in BSL action on Monday night. “We need to gain confidence and this win will help.”Elsewhere Saturday, Maccabi Ashdod improved to 3-3 with its third straight win, beating Hapoel Tel Aviv 90-86. After opening the season with three consecutive losses, Ashdod has strung together wins over Hapoel Eilat, Maccabi Tel Aviv and Hapoel Tel Aviv. Isaiah Swann led the way with 30 points, 24 of them in the first half. Chris Evans had 27 points and nine rebounds for Hapoel (2-4).On Sunday, Hapoel Jerusalem visits Ironi Nahariya.