With one coach already being sacked and players coming and going throughout the campaign, Maccabi’s management has all but given up on this season. 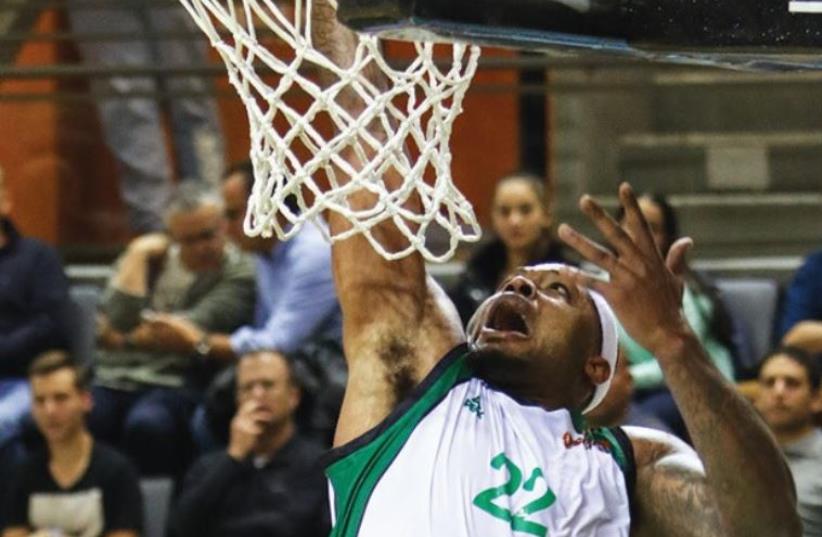 Maccabi Haifa forward Will Graves
(photo credit: ERAN LUF)
Advertisement
Despite a defeat of historic proportions, Maccabi Tel Aviv doesn’t plan on making any significant changes to its coaching staff or roster until the end of the season.Saturday’s 91-56 loss at Maccabi Haifa was the yellow-and-blue’s heaviest defeat in history in local action, marking a new low in a season which keeps deteriorating. Maccabi also registered its lowest point total in a game since March 1966 when it claimed a 52-43 win over Hapoel Gvat.With one coach already being sacked and players coming and going throughout the campaign, Maccabi’s management has all but given up on this season, hoping that somehow all the changes turn out for the best while fearing the worst.The recent additions of Gal Mekel, Elijah Millsap and Cedric Simmons have yet to bring about the change Maccabi was hoping for, with the latter set to be released when his two-week contract ends after struggling to prove his fitness.Tel Aviv trails league-leader Hapoel Jerusalem by 1.5 games in the BSL standings, but with 14 games still to play in the regular season and the championship to ultimately be decided in a Final Four format in four months, it still has plenty of time to turn things around.The yellow-and-blue also faces Ironi Ness Ziona in the State Cup semifinals next week and has still got everything to play for in the Eurocup, meeting Nizhny Novgorod in a do-ordie showdown for a place in the round of 16 at Yad Eliyahu Arena on Wednesday.Even though the injured Devin Smith, Trevor Mbakwe and Brian Randle are set to return in time for the decisive match with the Russians, Maccabi’s troubles clearly go far beyond the absence of any given player.“First of all, we have limited time to work and we have a limited number of players to work with,” was one of the excuses used by coach Zan Tabak in an attempt to explain the humbling loss at Romema Arena.“If I must give an explanation to the people who brought me here I will give them an explanation. But I don’t think this is the time to give explanations.”The pressure is mounting on Tabak, who is failing to convince people that the team has improved under his guidance, something which is made especially difficult when considering Maccabi defeated Haifa by 40 points in his first BSL game at the helm back on November 22.On Sunday, Maccabi Kiryat Gat beat Maccabi Ashdod 88-84 behind 27 points from Paul Delaney.Jonathan Skjoldebrand had 27 points for Ashdod, shooting 8-of-8 from three. Ironi Ness Ziona surprised Maccabi Rishon Lezion 89-83 thanks to 19 points from Yuval Naimi.