Nahariya beat defending champion Jerusalem at home two weeks earlier and showed it was no coincidence by overcoming Maccabi. 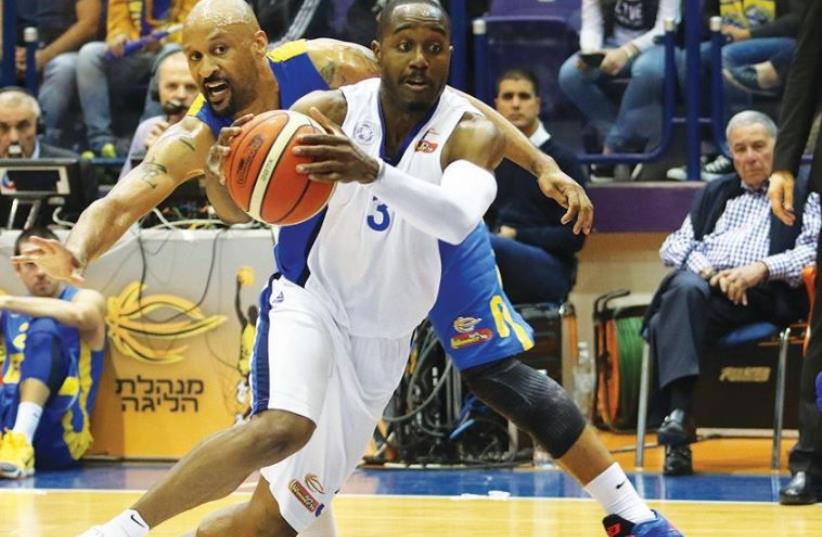 Ironi Nahariya guard Michael Umeh scored 16 points in last night’s 76-70 win over Maccabi Tel Aviv and Devin Smith (left) in BSL action
(photo credit: ERAN LUF)
Advertisement
Ironi Nahariya added the scalp of Maccabi Tel Aviv to the one of Hapoel Jerusalem on Monday night, moving tied with the yellow- and-blue at 6-3 with a 76-70 victory.Nahariya beat defending champion Jerusalem at home two weeks earlier and showed it was no coincidence by overcoming Maccabi, handing new coach Zan Tabak his first BSL defeat since taking charge. Maccabi thrashed Maccabi Haifa by 40 points in local league action last week, but it struggled yet again on Monday and needs to register a significant improvement to not only have any chance of advancing in the Euroleague but also of triumphing in the BSL.The tight encounter in Nahariya came down to the final two minutes, with Oded Brandwein’s three-pointer giving the hosts a 70-69 lead with 1:40 minutes to play. Ike Ofoegbu only hit one of two free-throw attempts to tie the score, and after scoring twice from the line, Cameron Clark stole the ball from Jordan Farmar and gave Nahariya a four-point advantage (74-70) with 38.6 seconds left from which Maccabi could not return.“My dream when I came to coach here was to see the arena full and that is what happened today,” said Nahariya coach Eric Alfasi. “We showed a lot of character. We played very well defensively and we always try and see where we can improve on offense.”Richard Howell led Nahariya with 18 points and nine rebounds, with Michael Umeh and Clark adding 16 points each.“I think everybody on the team is the MVP,” said Clark. “We came out and played hard and just competed. We just want to keep it going.”Devin Smith had 19 points and 10 boards for Maccabi, which lost after three straight BSL wins.Elsewhere, Bnei Herzliya improved to 5-4 with its fourth win in five games, surviving a late scare before overcoming Maccabi Kiryat Gat 71-68.A 16-2 Herzliya run to start the second half opened a 16-point gap (55-39) and the visitors seemed to be cruising to the victory when Stephen Dennis’s three-pointer established a 66-55 gap with four minutes to play.However, Kiryat Gat ate away at the margin and closed within a single point with a 13-3 surge.It would come no closer though and Herzliya moved over .500 for the first time this season.James Singleton scored 16 points for Herzliya, with Alando Tucker netting 26 points for Kiryat Gat, which fell to 2-7.“I told the players that we did all we could to lose the game in the final minutes and we were lucky we managed to win,” said Herzliya coach Micky Gorka. “This was a very important win for us. I’m happy with the result but not very pleased with our display. However, I’d rather it be this way than the other way around.”Also Monday, Maccabi Haifa beat Ironi Ness Ziona 74-57.Reginald Buckner had 17 points for Haifa, with Diamon Simpson scoring 15 for Ness Ziona, which lost in its first game under new coach Ofer Berkowitz.