Croat thrilled at joining yellow-and-blue after replacing Guy Goodes at the helm. 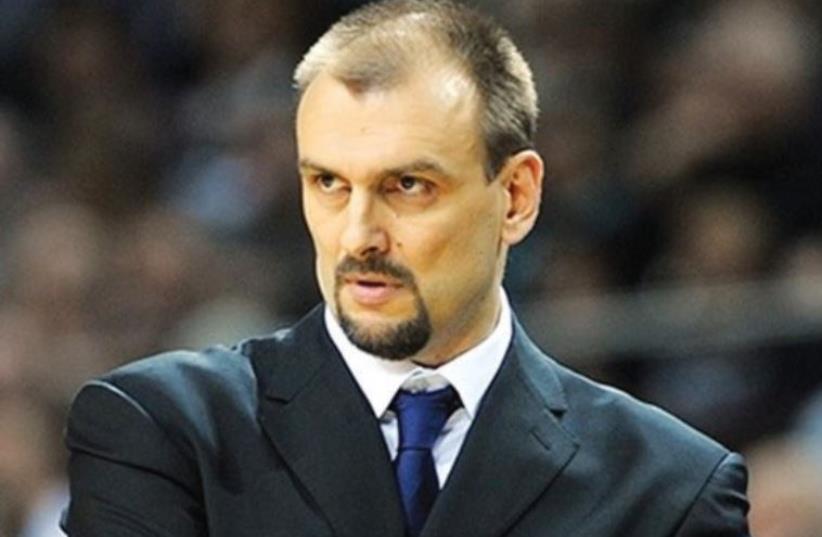 CROATIAN Zan Tabak, 42, will be the first foreigner to coach Maccabi Tel Aviv since Neven Spahija in the 2006/07 season
(photo credit: EUROLEAGUE WEBSITE)
Advertisement
Zan Tabak was officially appointed as the new head coach of Maccabi Tel Aviv on Monday, accepting the challenge of reviving the yellow-and-blue after its dismal start to the season.Exactly a week after Guy Goodes was sacked following a disappointing 17 months at the club, culminating in one of the team’s worst ever starts to a campaign, Maccabi named Tabak as his replacement, hiring a foreign coach for the first time since Neven Spahija guided the side in the 2006/07 season.The 45-year-old Croatian is just Maccabi’s second foreign coach since Vinko Jelovac guided the team in 1997/98.Maccabi paid a buyout estimated at around 100,000 euros to release the former NBA center from his contract at Montakit Fuenlabrada of the Spanish league, which he only joined this past summer.“I am very happy and excited to get to a huge club like Maccabi Tel Aviv,” said Tabak, who will arrive in Israel on Tuesday and hold his first press conference at Maccabi. “This is a great opportunity for me, and I’m sure I can help this group succeed. As someone who has devoted his whole life to basketball, I know exactly what an empire Maccabi Tel Aviv is. It is one of the most elite clubs in Europe.It is an honor for me to coach the team and give everything I’ve got to help Maccabi succeed at every level possible.“I can’t wait for the first training session and I’m sure that with the help of our great fans and the support of the management, the staff and of course the players, we can reach some nice achievements. I played against Maccabi, coached against Maccabi and I’m proud to be joining Maccabi.”After a successful playing career which included three consecutive European titles at Split and stints at the Houston Rockets, Toronto Raptors, Boston Celtics and Indiana Pacers, Tabak moved into coaching in 2006 as an assistant at Real Madrid. Tabak won the NBA title in 1995 with Houston, becoming the first European to win both the Euroleague and NBA crowns.He started his coaching career as an assistant to Joan Plaza at Madrid, with the two moving together to Cajasol Seville for two seasons. After that he coached briefly in Sopot of Poland before an excellent run at Laboral Vitoria. Tabak has experience at taking over a struggling side mid-season after joining Vitoria in November 2012 and leading the team on a 17-game winning streak in the Euroleague and Spanish league, reaching the quarterfinals of the Euroleague.However, his contract wasn’t extended and he returned to Real to be Pablo Laso’s assistant. They reached the 2014 Euroleague championship game, only to lose to David Blatt’s Maccabi side in overtime, but claimed the title last term, also taking the Spanish league and Spanish King’s Cup titles.Tabak was handed a contract until the end of next season, with Maccabi having an exit clause at the end of this season for a sum estimated at $250,000.Tabak’s first game at the helm will be against CSKA Moscow in the Euroleague at Yad Eliyahu Arena on Thursday. The yellow-and-blue is on the verge of failing to qualify for the Top 16 for the first time ever, after falling to 1-4 in Group D following an 84-73 defeat to Darussafaka Istanbul at Yad Eliyahu last Thursday in assistant coach Avi Even’s first game at the helm following the sacking of Goodes three days earlier.Tabak wasn’t Maccabi’s first option.Israel national team coach Erez Edelstein and former Maccabi guard Sarunas Jasikevicius of Lithuania both admitted to turning down an offer from the club.The likes of Iran national team coach Dirk Bauermann of Germany, Bosnia national team coach Dusko Ivanovic, Lithuania national team coach Jonas Kazlauskas and Italy national team coach Simone Pianigiani were all also mentioned in connection with the vacancy.