Eilat came back from a 0-2 deficit in last season’s semis to claim a 3-2 series win and send Maccabi crashing out before the BSL final for the first time since 1993. 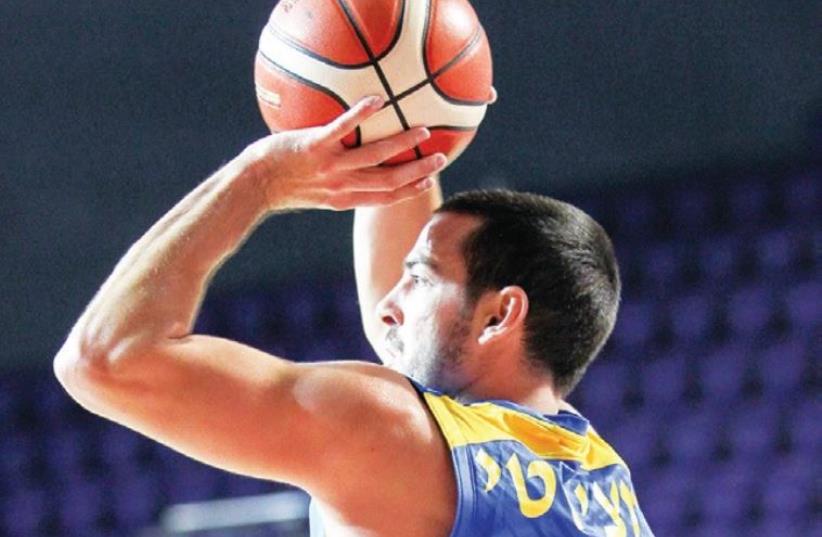 Maccabi Tel Aviv guard Taylor Rochestie finished with 18 points in last night’s 95-89 win over Maccabi Rishon Lezion in the Winner Cup semifinals at the Drive-In Arena in Tel Aviv
(photo credit: DANNY MARON)
Advertisement
Maccabi Tel Aviv will have its first opportunity to avenge last season’s shock playoff semifinal exit at the hands of Hapoel Eilat when the two meet in the final of the pre-season Winner Cup at the Drive-In Arena in Tel Aviv on Monday night.Eilat came back from a 0-2 deficit in last season’s semis to claim a 3-2 series win and send Maccabi crashing out before the BSL final for the first time since 1993.Both teams have undergone wholesale changes since that memorable series, especially Maccabi, which advanced to the final with a 95-89 triumph over Maccabi Rishon Lezion on Saturday.Eilat beat Hapoel Tel Aviv 91-83 in the second semi on Saturday behind 19 points from Khalif Wyatt. Hapoel Tel Aviv defeated reigning BSL champion Hapoel Jerusalem 72-66 in the quarterfinals on Friday.Devin Smith had 18 points and nine rebounds for Maccabi Tel Aviv on Saturday, with Taylor Rochestie also scoring 18 for Maccabi, which hit 15-of-25 three-point attempts after going 14-of- 24 from distance in Thursday’s quarterfinal win over Ironi Ness Ziona.Trevor Mbakwe added 15 points, with Shawn Dawson leading Rishon with 20 points and six boards.“We started poorly,” said Maccabi coach Guy Goodes. “We changed to a small lineup with four shooters and that helped us a lot. We have a lot to learn from this game.”Rishon established a quick double- digit margin thanks to a 15-2 run, with Darryl Monroe’s basket opening a 19-9 lead. Rishon took a 28-17 advantage into the second period, but Tel Aviv would eat away at the deficit throughout the second period until Rochestie’s three-pointer tied the score at 45-45 with 23 seconds to play in the half.Rishon scored the first six points of the third period, but Maccabi replied with an 18-2 surge, capped by a Smith triple which opened a 63-53 gap. A Jordan Farmar buzzer-beater gave the yellow- and-blue a seven-point cushion (72-65) at the end of the third frame and Rishon came no closer than three points in the final 10 minutes.Despite the disappointing loss in the quarterfinals on Friday, Hapoel Jerusalem coach Danny Franco was optimistic his team will be ready for the start of the BSL season in two weeks.“Even in training we are still trying to organize ourselves and sometimes it looks like a comedy of errors,” said Franco. “We have a good team but it needs to gel and that will take time.”