The yellow-and-blue registered its eighth consecutive win over all competitions and fourth straight in the league after outplaying Herzliya from the first moment. 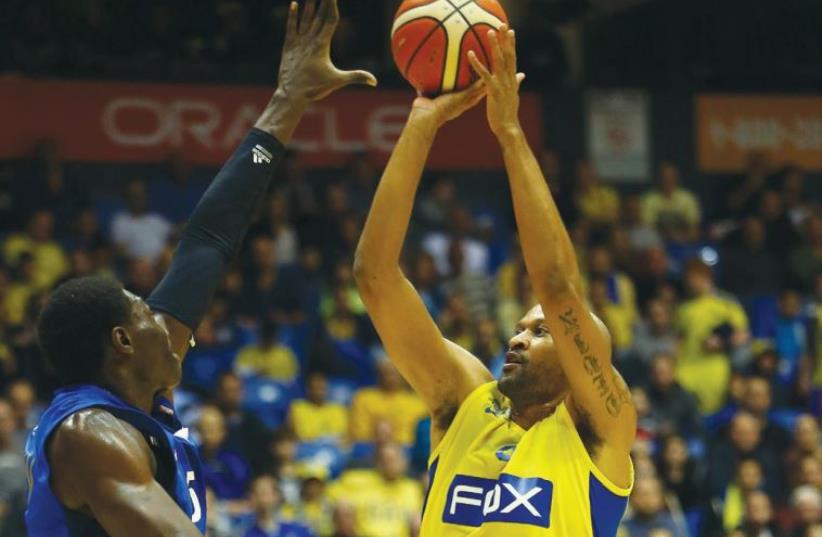 Maccabi Tel Aviv forward Devin Smith (right) had 16 points and eight rebounds in last night’s 102-74 win over Bnei Herzliya in BSL action at Yad Eliyahu Arena
(photo credit: UDI ZITIAT)
Advertisement
Maccabi Tel Aviv cruised to another comfortable win in local action on Saturday night, improving to a BSL-best 10-3 record with a 102-74 victory over Bnei Herzliya at Yad Eliyahu Arena.The yellow-and-blue registered its eighth consecutive win over all competitions and fourth straight in the league after outplaying Herzliya from the first moment. Maccabi hit the ground running, outscoring Herzliya 31-12 in the first quarter and never looking back.Since losing to Ironi Nahariya at the end of November, Maccabi has won five local games in a row by an average 23 points per contest.Devin Smith, Taylor Rochestie and Sylven Landesberg each scored 16 points for Tel Aviv, with Karam Mashour netting a careerhigh 25 points for Herzliya (7-6), which had won four of its previous five games.“We tried to come out aggressive. We are a little short but we played well and played hard,” said Smith.Herzliya coach Micky Gorka had no excuse for his team’s performance.“We didn’t want to look like this,” said Gorka. “We didn’t show up against a team that came and played defense and didn’t make anything easy for us.I told the players that we need to learn from this experience.”On Sunday, Ironi Ness Ziona (4-8) hosts Maccabi Kiryat Gat (3-9), Maccabi Ashdod (6-6) visits Ironi Nahariya (6-6) and Maccabi Haifa (7-5) welcomes Hapoel Eilat (5-7).Maccabi Rishon Lezion (8-3) hosts Hapoel Tel Aviv (4-8) on Monday, while Hapoel Holon (3-8) faces Hapoel Jerusalem (9-3), which will be aiming to bounce back from its shock State Cup exit at the hands of Maccabi Haifa on Thursday after also losing to Ashdod in BSL action earlier in the week.