Beersheba, playing in the Champions League qualifiers for the first time in club history, wasn’t seeded in the draw and was fortunate to avoid far trickier ties against Salzburg and Zagreb. 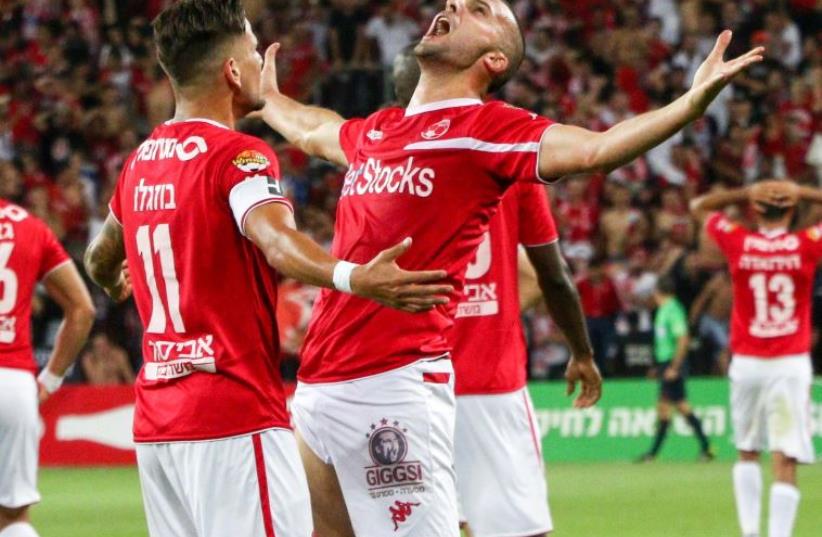 Hapoel Beersheba striker Ben Sahar (right) and teammate Maor Buzaglo, who both scored last night, celebrate the club's first Premier League championship in 40 years.
(photo credit: DANNY MARON)
Advertisement
Hapoel Beersheba’s first hurdle on the way to the Champions League group stage will be Moldovan champion FC Sheriff Tiraspol. Beersheba, which won its first Premier League title in 40 years last season, was drawn on Monday to host Tiraspol in the first leg of the second qualifying round on July 12/13, with the return leg to be played in Moldova the following week.Beersheba, playing in the Champions League qualifiers for the first time in club history, wasn’t seeded in the draw and was fortunate to avoid far trickier ties against Red Bull Salzburg and Dinamo Zagreb.Beersheba will need to overcome three rounds of qualifiers in order to reach the prestigious group stage.Defeating Tiraspol will at least ensure Beersheba is handed a berth in the Europa League even should it be knocked out in the Champions League third qualifying round or playoffs. A loss in the third qualifying round will give it a ticket to the Europa League playoffs, while a setback in the Champions playoffs will book its place in the Europa group stage.Beersheba is playing in continental competition for a third straight season, but it hasn’t won a European tie in almost two decades. The team was sent packing in the second qualifying round of the Europa League in each of the previous two seasons and will not be taking anything for granted against Sheriff, which has claimed 14 of the past 16 Moldovan championships.“Any team that plays in the Champions League will give us a hard time,” said Beersheba coach Barak Bachar.“We will have to learn everything about Sheriff, which has a lot of experience.We will do everything to advance in Europe, which is one of the goals we have set ourselves this season.”The first Israeli teams to enter European competition will be Maccabi Tel Aviv and Beitar Jerusalem, who will already get their Europa League campaigns underway with the first leg of the first qualifying round next Thursday.Maccabi, which surrendered the Premier League title after three years, faces ND Gorica of Slovenia, a far cry from the likes of Chelsea, Porto and Dynamo Kiev which it played in the Champions League group stage last season. New coach Shota Arveladze’s debut will be in the first leg in Israel on June 30, with the Slovenians to host the return leg. Should Maccabi advance it will play the winner of the tie between KS Teuta of Albania and Kairat Almaty of Kazakhstan.Beitar visits Sloboda Tuzla of Bosnia in the first leg of the first qualifying round before hosting the second match a week later. Should it reach the second qualifying round it will face either Banants of Armenia or Omonia Nicosia of Cyprus.State Cup holder Maccabi Haifa will enter the competition in the second qualifying round and awaits the winner of the tie between Nomme Kalju of Estonia and FK Trakai of Lithuania.The second qualifying round will be played on July 14 and 21.