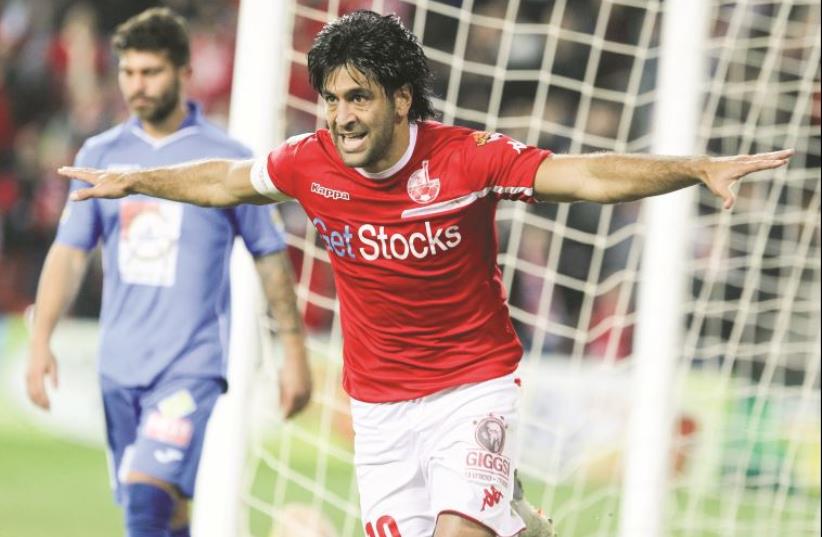 Hapoel Beersheva Elyaniv Barda
(photo credit: DANNY MARON)
Advertisement
Elyaniv Barda ensured Hapoel Beersheba took a significant step towards a place in the State Cup semifinals on Tuesday night, setting up one goal and scoring another after coming on as a substitute to lead his team to a 2-0 win over Beitar Tel Aviv/ Ramle of the National League in the first leg of their quarterfinal at Turner Stadium.Also Tuesday, Bnei Yehuda and Maccabi Haifa drew 2-2 in their first leg at Bloomfield Stadium.Eliran Atar gave Haifa the lead against his former team from the penalty spot in the 55th minute, but the hosts completed a comeback with two goals in five minutes courtesy of Gal Tzruya (69) and Pedro Galvan (74).Nevertheless, Haifa will be the favorite in the return leg after Glynor Plet equalized for the Greens in the 84th minute.The second legs will be played on March 1/2.Beersheba, which holds a fivepoint gap at the top of the Premier League standings, entered the tie against Tel Aviv/Ramle as a massive favorite, but was given a real run for its money by the second division side, which sits in 12th place in the National League.Beersheba coach Barak Bachar was planning on resting the 34-year-old Barda, but with the score still tied at 0-0 at the interval, he sent him on to save the day. Barda did all the hard work to set up the opener for Ben Sahar in the 60th minute and scored the all-important second goal in the second minute of stoppage time.“The substitutions changed the match,” said Beersheba coach Barak Bachar. “I wasn’t planning on using Barda, but he helped wake the players and played a very significant role.“I must complement our opponent,” added the coach. “They came to play and pressured us and reached chances. But this is the cup, and as disappointed as you can be from the performance, the result is what’s important. This is a very good advantage ahead of the season leg, but we understood today that we are going to have a very tough time in the return leg as well.”Tel Aviv/Ramle coach Amir Turgeman accepted that his team has a mountain to climb in the second leg.“I end the game with mixed emotions,” said Turgeman. “If I’m disappointed at the end of a match against Beersheba at Turner Stadium the guys must have put on a great performance.We played well and moved the ball and closed down Beersheba.The result doesn’t really tell the story of the match. It is a shame we conceded the second goal because that significantly reduces our chances. We still have a chance, but it is small.”The two remaining quarterfinals get underway on Wednesday, with cup holder Maccabi Tel Aviv visiting Hapoel Kfar Saba and Bnei Sakhnin hosting Hapoel Ashkelon of the National League.Maccabi Tel Aviv aims to bounce back from Sunday’s disappointing 1-1 draw against Hapoel Tel Aviv in the derby, which left it five points back of Beersheba in the standings.“This is a very big cup game, especially coming after the match against Hapoel,” said Maccabi coach Peter Bosz on Tuesday.“It is mentally tough as we just played a derby and we have to be ready to play. It won’t be easy.”Maccabi needed extra-time to overcome Hapoel Rishon Lezion of the National League in the round of 16 and Bosz is expecting a far tougher time against Kfar Saba.“We must play better than we did in the last two cup games and I know that we can do better than what we’ve done recently,” he said.