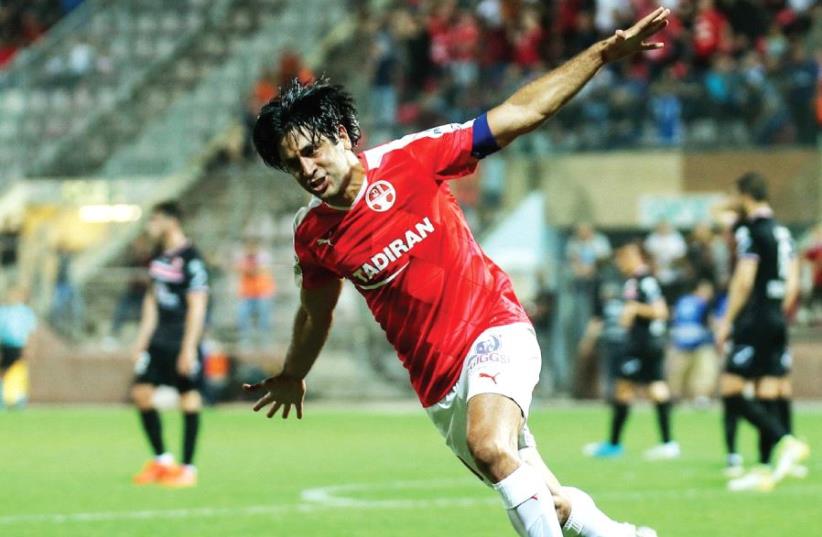 Hapoel Beersheba striker Elyaniv Barda
(photo credit: MAOR ELKASLASI)
Advertisement
Hapoel Beersheba took a massive step towards a second straight Premier League championship on Saturday, extending its gap at the top to eight points.Beersheba came back from a goal down to defeat Bnei Sakhnin 3-1 on the road for its eighth straight victory, while Maccabi Tel Aviv was held to a 1-1 draw at Beitar Jerusalem.With each team having five more matches remaining, Maccabi is still alive in the title race. However, it will require what seems like an unlikely collapse by Beersheba in order to regain the title it won three years in a row before Beersheba’s triumph last season.The reigning champion looked to be in trouble when Yuval Avidor gave Sakhnin a 1-0 lead in the 44th minute. But its took Beersheba just two minutes to equalize through Elyaniv Barda, with John Ogu’s shot taking a fortuitous deflection off the veteran striker.Anthony Nwakaeme then gave the visitors the lead two minutes into the second half and Maharan Radi secured the points with a goal from the edge of the box in the 55th minute.“We started the match well but we dropped a gear toward the end of the first half and we were punished,” said Beersheba coach Barak Bachar. “We understood that the second half is very significant and that if we win it we will take a very significant step towrads the championship. Our goal is to win all our matches until the end of the season. We need to focus on our next match in Haifa on Tuesday and not think of anything else.”Beersheba visits Maccabi Haifa on Tuesday, while Maccabi Tel Aviv visits Sakhnin. Maccabi hosts Beersheba in their final meeting next Saturday.Maccabi Haifa beat Maccabi Petah Tikva 1-0 on Saturday through Dekel Keinan’s goal in the 10th minute.Tel Aviv took an early lead against Beitar at Teddy, with Tal Ben-Haim scoring in the 14th minute. But Idan Vered equalized for Beitar on the brink of halftime and the yellow-and-blue couldn’t find a winner in the second half.Elsewhere Saturday, the relegation playoffs resumed after a two-week break. The battle against demotion to the National League looks set to be fought out between three teams. The bottom two face each other on Monday night, with last-place Hapoel Kfar Saba (22 points) visiting Hapoel Tel Aviv (24).That gave Hapoel Ashkelon chance to create some breathing room on Saturday and it did so with a 1-0 victory over Bnei Yehuda (31). Branislav Jovanovic scored the only goal of the match in the 69th minute, moving Ashkelon four points clear of the relegation zone.A 95-minute winner secured Hapoel Ra’anana another season in the top flight on Saturday. Snir Shuker gave Ra’anana a 3-2 win at Ironi Kiryat Shmona deep into stoppage time. Shlomi Azulay gave Kiryat Shmona the lead in the 36th minute, but Shimon Abuhazira equalized two minutes later and gave Ra’anana the lead in the 69th minute, despite the hosts losing Emmanuel Mbola to a red card seven minutes earlier.Shoval Gozlan looked to have given the hosts a point with his goal in the 92nd minute, only for Shuker to snatch the victory for Ra’anana.Also Saturday, Hapoel Haifa (33) and Ashdod SC (32) drew 1-1.