Beersheba up against the wall in Turkey 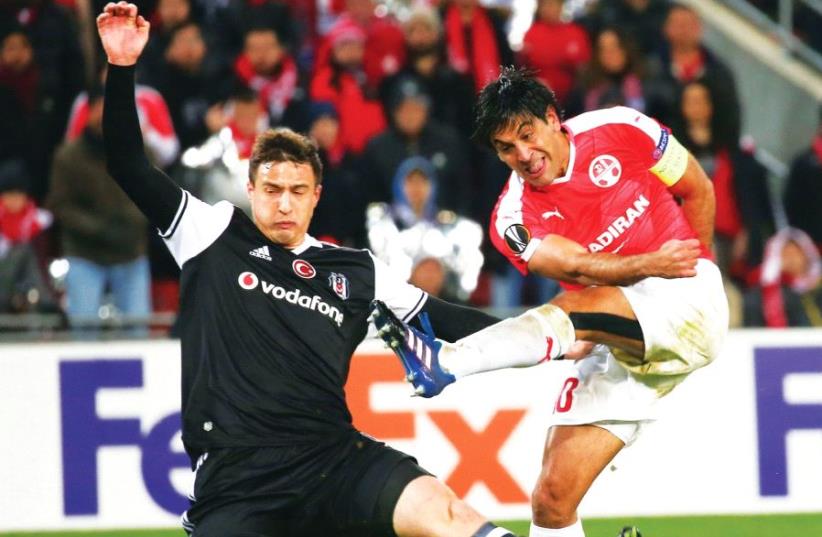 After a frustrating first leg, Elyaniv Barda (right) Hapoel Beersheba face an almost impossible mission when the team tries to overturn a 3-1 deficit in the second leg against Besiktas and Dusko Tosic in the Europa League round of 32 in Istanbul tonight.
(photo credit: DANNY MARON)
Advertisement
A historic campaign will come to an end in Istanbul on Thursday night unless Hapoel Beersheba can register one more remarkable win that would top all that it has already achieved this season.Beersheba enters the second leg of the Europa League round of 32 trailing Turkish champion Besiktas 3-1 following last week’s loss at Turner Stadium.Beersheba stunningly finished ahead of Inter Milan and Southampton to come through the group stage, beating the Italian giant twice and drawing both matches against the English Premier League side.However, overturning a 3-1 defeat in Turkey to reach the last 16 would be nothing short of incredible, especially after Besiktas’s clinical display in Israel last week.Beersheba captain Elyaniv Barda equalized for the Israeli champion one minute before the break after Williams Soares had given the visitors the lead with an own goal two minutes earlier. Second-half goals from Cenk Tosun (60) and Atiba Hutchinson (93) ensured Besiktas established a significant advantage ahead of the return leg.“It is a shame we conceded the third goal, but we pushed forward for an equalizer as we felt we already had nothing to lose,” said midfielder Maor Melikson. “We wanted to register a result which would give us a chance in the second leg, but we didn’t succeed. Besiktas is a really good side, maybe the best we have played this season.”Melikson insisted that Beersheba is entering the match in Istanbul believing it can advance to the next round. “We will give our all,” he noted. “This may sound funny after the result in the first leg, but we always believe in ourselves.”While Beersheba will surely not give up without a fight, its record away from Turner over recent months is anything but encouraging.Beersheba’s lead at the top of the Premier League standings is down to a mere three points due to its recent woes on the road, failing to win for a fifth straight away league match in Sunday’s 0-0 draw at Hapoel Haifa, a streak stretching back over two months.Beersheba has also won just one of its six European away games this season, 2-0 against Inter at San Siro. Besiktas is unbeaten in six continental home matches, winning once and registering five draws.Three teams already secured their progress to the last 16 on Wednesday night, including Manchester United. United claimed a 1-0 win at St. Etienne in France thanks to Henrikh Mkhitaryan’s goal in the 16th minute to complete a 4-0 victory on aggregate.United traveled to France without Wayne Rooney, who last month became the club’s record scorer on 250 goals, amid continuing media speculation about his future.The England striker has been struggling with a muscle injury and last played at the start of February. British media have linked the 31-year-old with a move to the Chinese Super League where the transfer window remains open until February 28.Asked about Rooney’s future, United manager Jose Mourinho told a news conference on Tuesday that he did not want the striker to leave but said the decision was in the player’s hands.“You have to ask him,” said the Portuguese coach. “I can’t guarantee that I’m here next week, how can I guarantee that the player is here next season? “What I can guarantee is that if Wayne one day leaves the club it is not because I want him to leave the club, that’s the only thing I can guarantee.“I would never push, or try to push, a legend of this club to another destiny.“So you have to ask him if he sees himself staying at the club for the rest of his career or he sees himself moving. It is not a question for me because I’m happy to have him.“I was very open with you... I don’t want him to leave.”