Both coaches made the most of the opportunity and rested many of their regular starters. 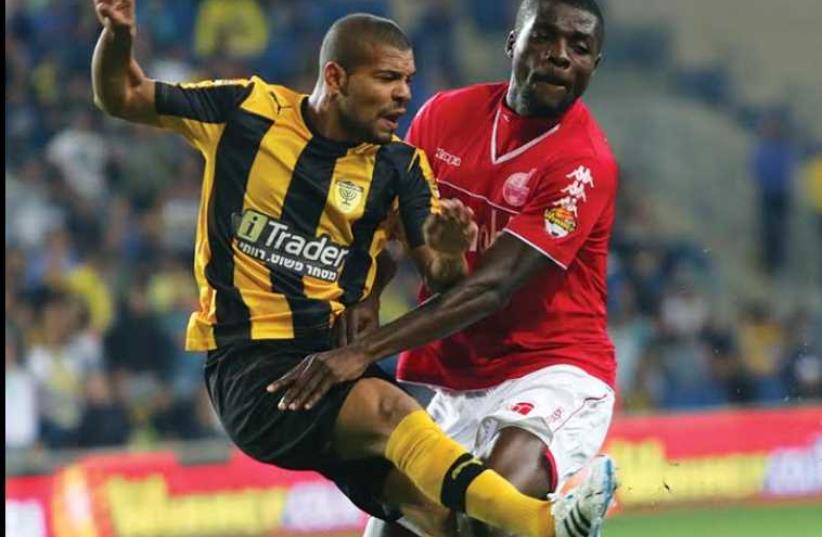 Hapoel Beerseba’s John Ogu and Beitar Jerusalem’s Claudemir
(photo credit: ADI AVISHAI)
Advertisement
Beitar Jerusalem and Hapoel Beersheba will enter the second leg of their Toto Cup quarterfinal at Turner Stadium in two weeks with everything to play for, after drawing 1-1 at Teddy Stadium in the first leg on Wednesday.Both coaches made the most of the opportunity and rested many of their regular starters. Lidor Cohen gave Beitar the lead in the 48th minute with a clinical solo effort on the edge of the box, but Shlomi Arbeitman equalized in the 65th minute following a defensive blunder.Elsewhere Wednesday, Ironi Kiryat Shmona beat Hapoel Haifa 1-0 on the road thanks to Ahmed Abed’s 11th-minute winner, while Bnei Yehuda and Maccabi Netanya drew 1-1. Abed Jabarin gave Netanya the lead in the 54th minute, but Ohad Kadusi leveled the score four minutes from time.At Teddy, Beitar coach Slobodan Drapic was pleased with the performance of his youngsters.“We wanted to see a few more of our fringe players and give them some minutes,” he explained. “Some of the players showed they deserve to play and our squad is showing progress. We need to take it one step at a time and we are focusing on Sunday’s league game against Kiryat Shmona.”The draw came a day after Beersheba surprisingly announced that coach Barak Bachar and the club have agreed to a one-year contract extension. Bachar only joined Beersheba this past summer after leaving Ironi Kiryat Shmona. However, club owner Alona Barkat said she was so impressed with his work at the club that she wanted to secure his services for another year even though he has yet to reach the midway point of his first season in Beersheba.“In the short time that Barak has been with us I have been convinced that he is the right person to upgrade the club’s professional infrastructure,” said Barkat. “I’m happy he is continuing with us for another season.”Bachar thanked Barkat for her faith.“I’m enjoying every moment since joining Hapoel Beersheba,” said Bachar. “I feel an excellent connection with my players and staff and I owe them a big thank you.This is an amazing club with rare fans and I’m delighted to be continuing for another season. Above all, a big thank you to Alona Barkat for the faith she has shown in me and for the course she is setting for this club.”