Jerusalem finishes in third thanks to 2-0 win over Mac TA; Beersheba caps historic campaign with another victory 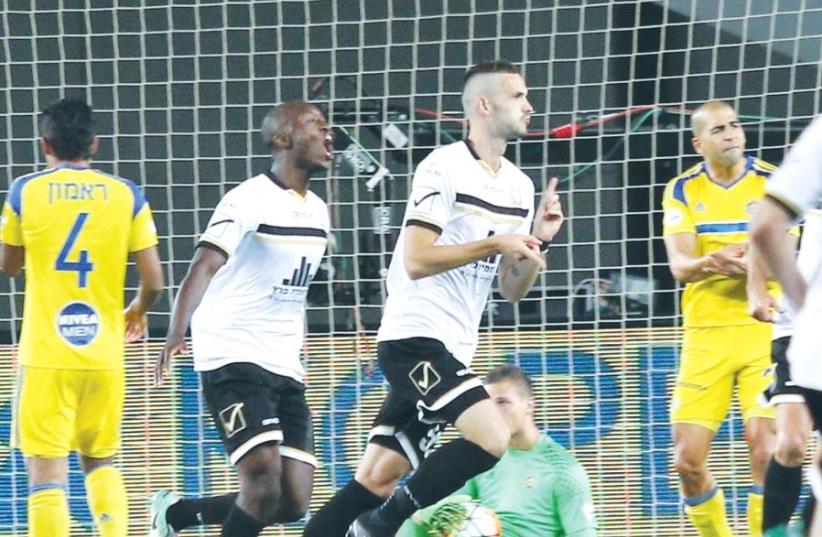 Beitar Jerusalem midfielder Erik Sabo (center) celebrates after scoring the opener in last night’s 2-0 victory over Maccabi Tel Aviv in the final day of the Premier League season.
(photo credit: AVI AVISHAI)
Advertisement
Beitar Jerusalem secured a place in European competition in the final day of the Premier League season on Saturday night, while champion Hapoel Beersheba wrapped up a record campaign with a 2-0 win over Bnei Sakhnin.After Beersheba already clinched a second straight championship last month, and with Hapoel Tel Aviv and Hapoel Kfar Saba being relegated last weekend, all that was left to be determined in Saturday’s three matches was which team finished in third place in the standings.A third-place finish secures automatic qualification for the Europa League qualifiers next season, while fourth will only be good enough should Maccabi Tel Aviv defeat Bnei Yehuda in the State Cup final on Thursday.Beitar required only one point to finish in third after entering the day with a two-point lead over Maccabi Petah Tikva.Jerusalem wasted little time against Maccabi Tel Aviv in Netanya, opening an early two-goal lead to settle any nerves, on the way to a 2-0 win. Erik Sabo gave Beitar the lead in the 12th minute and Itay Shechter doubled the advantage seven minutes later, ensuring Jerusalem finished in third place behind Beersheba and Tel Aviv for a second straight year.Petah Tikva could only manage a 0-0 draw at Maccabi Haifa.Beitar will be playing in Europe for a second straight season after previously going seven years without continental action.Beitar is already well into its preparations for next season, with Eli Ohana expected to soon be announced as the club’s new boss. Owner Eli Tabib is not allowed to be involved in the running of the club over the next two seasons due to a ruling made by the Israel Football Association’s ownership transfer committee last summer following his conviction in June 2015 of assaulting a minor and of disruption of justice.The committee didn’t bar Tabib from retaining his ownership of the club, but ordered him to disconnect himself from its running.With Ohana being a good friend of Tabib, and having a cult status among Beitar fans, he was a natural choice to take charge, leaving his role as a TV commentator for the position.The official announcement is expected in the coming days after which coach Sharon Mimer’s future will be confirmed.Mimer replaced Ran Ben-Shimon in February and has won over the fans, with many of them being initially wary of his appointment a mere two weeks after he was sacked by Kfar Saba.“This has been a dream season,” said Mimer. “I will sign a new contract next week. The possibility of Ohana returning to Beitar has already created a lot of excitement and when he finally arrives it will lift the club even more. Tabib is working hard to strengthen the squad for next season and if his plans come to fruition there will be a very strong team here next season.”Earlier Saturday, Beersheba completed a second straight unbeaten season at home in Turner Stadium, equaling the all-time unbeaten home record of 35 matches without defeat also owned by Maccabi Tel Aviv.Beersheba also set two new club records, registering its 26th victory of the campaign and amassing 85 points on the season.Romanian midfielder Ovidiu Hoban, who was likely playing his last match for the club, netted the opener from the penalty spot in the 32nd minute, with Maor Melikson completing the celebration with a goal in the 90th minute.