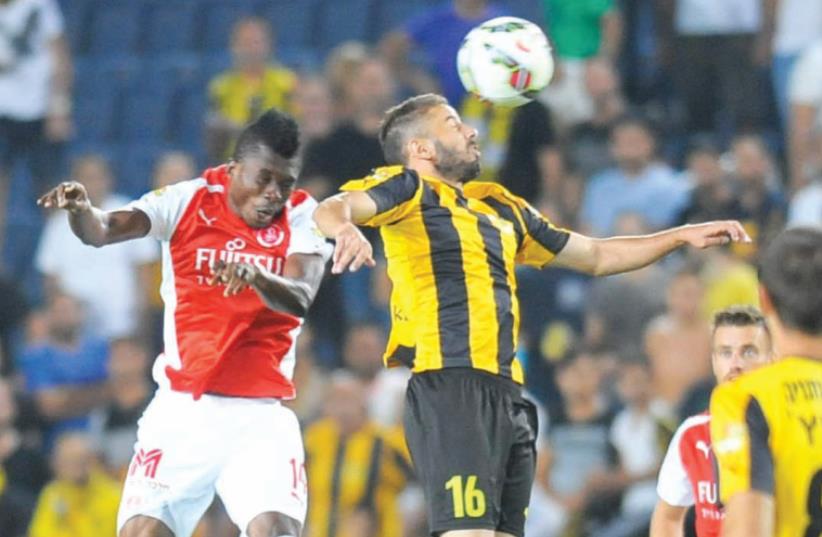 Beitar Jerusalem striker Dovev Gabay (16) and Hapoel Tel Aviv midfielder Issou Lingane (left) challenge for the ball during last night’s 0-0 draw at Teddy Stadium in both clubs’ opening match of the season.
(photo credit: ASAF KLIGER)
Advertisement
With zero wins and two goals between them from three matches each to date, Beitar Jerusalem and Hapoel Tel Aviv will look to kick-start their Premier League campaigns on Saturday night.As two of Israeli soccer’s biggest clubs they enter every season dreaming of a return to their former glory. However, they are willing to settle for a lot less at the moment following a torrid start to the season.Beitar may still be undefeated, but it has little reason to draw optimism from its three draws so far, especially with two of them being goalless deadlocks.Slobodan Drapic’s team finally scored its first goal of the season last weekend, but it could still only manage a 1-1 draw at home against Hapoel Haifa.Beitar visits newly-promoted Bnei Yehuda at Bloomfield Stadium on Saturday, with the latter suffering consecutive defeats to Hapoel Acre and Maccabi Petah Tikva after opening the season with a win over Maccabi Haifa.“We are experiencing a tough period and we will only break out of it with a win,” Drapic told his players. “The match on Saturday is the type of game you have to win at all cost, even if it is ugly.”Hapoel Tel Aviv is still searching for a full-time replacement for the sacked Cesar Mendiondo, with assistant Walid Badir to continue guiding the team in Saturday’s game at Hapoel Haifa.Owner Amir Kabiri is adamant on bringing in another foreigner, with Romanian Constantin Galca the latest name to be mentioned in connection with the Reds.Hapoel drew 1-1 with Maccabi Netanya last Saturday and Badir called for patience.“The players are lacking confidence and we will work on that,” said Badir. “This team needs time. We have 20 new players and they will slowly find their rhythm.”Maccabi Petah Tikva will aim to extend its perfect start to the season when it visits Hapoel Kfar Saba on Saturday. Petah Tikva is the only side to have won all three of its matches to date, but coach Ran Ben-Shimon is not getting carried away.“We have shown a lot of character so far, but this is only the beginning of the season,” said Ben-Shimon.Also Saturday, Netanya hosts Ironi Kiryat Shmona and Hapoel Acre visits Bnei Sakhnin. Champion Maccabi Tel Aviv welcomes Hapoel Ra’anana on Sunday.The new Turner Stadium in Beersheba will host its first match on Monday when the local Hapoel faces Maccabi Haifa.More than 3,000 fans came to watch the team’s first training session on Wednesday, with the sold-out stadium – named after former Beersheba mayor Ya’akov Turner – to be filled with 16,000 supporters on Monday.Beersheba has impressed in its two wins to date, with its only defeat coming in a tight match against Maccabi Tel Aviv. Haifa sits in last place following its disastrous start to the campaign. The Greens have picked up just a single point and are the only team in the league yet to score this season.“I’m excited to be entering the new stadium,” said Beersheba captain Elyaniv Barda. “We are not thinking of Haifa’s troubles and we know they are a big club with good players. We are focusing on ourselves in the hope of registering our first win at Turner.”