Beitar Jerusalem crashes out in Bulgaria 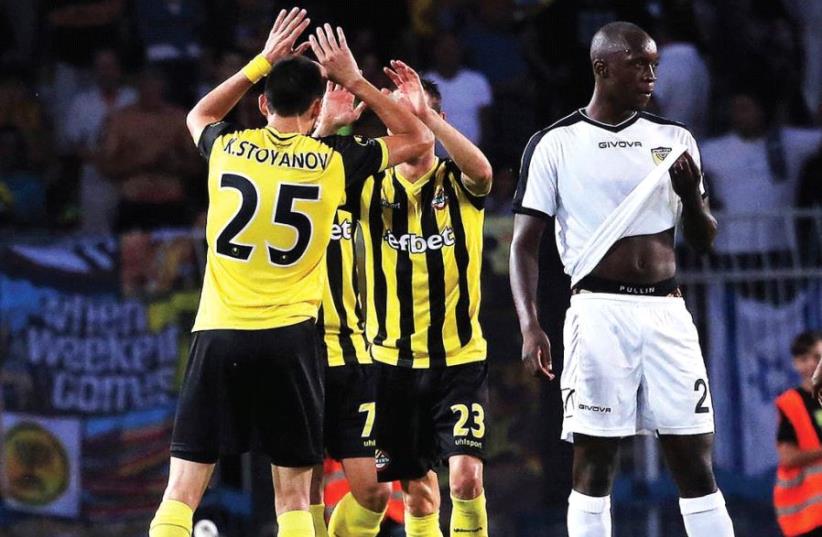 Beitar Jerusalem defender Antoine Conte (right) looks away as Botev Plovdiv players celebrate during last night’s 4-0 win over the Israeli side in Bulgaria.
(photo credit: UDI ZITIAT)
Advertisement
Beitar Jerusalem was knocked out of Europe in embarrassing fashion on Thursday night, while Bnei Yehuda safely progressed to the Europa League third qualifying round.Maccabi Tel Aviv was hoping to join Bnei Yehuda in the next round when it visited KR Reykjavik in Iceland in a match which ended after press time.Maccabi claimed a 3-1 win in the first leg.Beitar has played in Europe in each of the past three seasons after previously going six years without continental action. But it has still never reached the group stage of a European competition after suffering a humbling exit at the hands of Botev Plovdiv of Bulgaria on Thursday, losing 4-0 on the road.Jerusalem was hoping to build on reaching the Europa playoffs last season, but instead was sent packing two rounds earlier by a team that only finished in seventh place in the Bulgarian league last season, qualifying for Europe thanks to its shock cup triumph.Beitar knew it had plenty of work to do on Thursday after being held to a 1-1 draw in the first leg in Petah Tikva last week. Jerusalem was still confident of progressing though, only for the night to end in a humiliating 5-1 defeat on aggregate.Plovdiv took the lead through Plamen Dimov in the 10th minute and never looked back, exposing Beitar’s weak defense time and again.Viana Jardim Silva gave the hosts a deserved 2-0 advantage on 32 minutes and any illusion Beitar had of mounting a comeback was ended by Lachezar Baltanov’s goal two minutes into the second half. Marcel Heister left Beitar with 10 men after being shown his second yellow card in the 76th minute and substitute Felipe Brisola completed the rout in the 90th minute.Bnei Yehuda, which qualified for Europe after surprising Maccabi Tel Aviv in last season’s State Cup final, completed a 3-1 aggregate victory over Trencin of Slovakia, winning 2-0 in the second leg in Petah Tikva.Bnei Yehuda was far from impressive, but made the most of its chances.Mavis Tchibota broke the deadlock five minutes into the second half and substitute Yuval Ashkenazi secured Bnei Yehuda’s progress five minutes from time.Bnei Yehuda will have to record a stunning upset to go any further in the competition, with Russian powerhouse Zenit St. Petersburg awaiting in the third qualifying round.St. Petersburg, coached by Italian Roberto Mancini, has spent 44 million euro on strengthening its squad this summer, hoping to improve on last season’s disappointing third-place finish in the Russian league. Zenit has reached the knockout rounds of either the Champions League or Europa League in each of the past six seasons.“We didn’t play well in the first half, but we knew they would push forward in the second half and we converted our chances,” said Bnei Yehuda coach Yossi Abuksis. “We know we need to continue and strengthen our squad and we will do that. I have yet to scout Zenit so I don’t know how we will be able to beat them.We need to make the most of this experience even if we don’t progress. No one is giving us a chance but this is soccer and anything is possible.”Next up for Maccabi Tel Aviv, assuming it avoided an upset in Iceland, is Panionios of Greece.