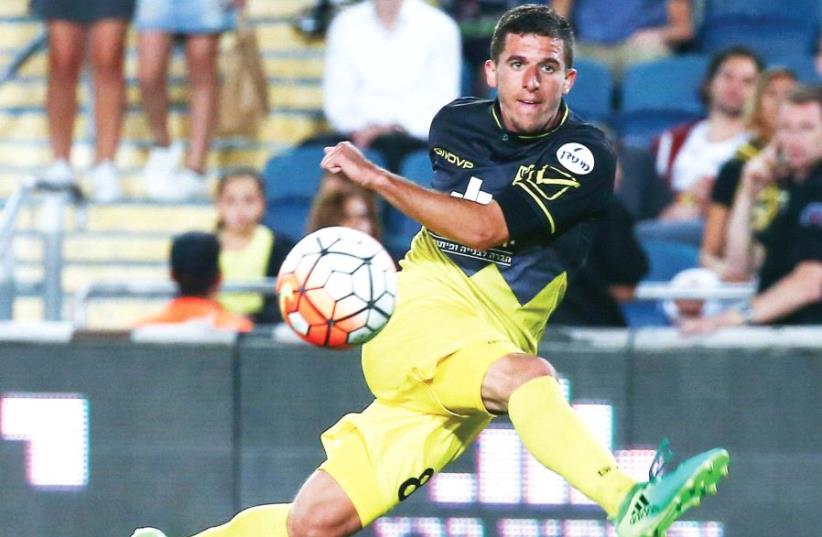 Beitar Jerusalem midfielder Idan Vered will look to end his impressive season on a high when the team visits Maccabi Tel Aviv in its final Premier League match on Saturday night
(photo credit: DANNY MARON)
Advertisement
The Premier League season will officially come to a close on Saturday night, with one final piece of business to be decided in the last day of the campaign.After Hapoel Beersheba already wrapped up the championship last month, and with Hapoel Tel Aviv and Hapoel Kfar Saba being relegated last weekend, all that is left to be determined in Saturday’s three matches is which team finishes in third place in the standings.A third-place finish secures automatic qualification for the Europa League qualifiers next season, while fourth will only be good enough should Maccabi Tel Aviv defeat Bnei Yehuda in the State Cup final next Thursday.Beitar Jerusalem sits in pole position in the battle for third with a two-point lead over Maccabi Petah Tikva. Beitar also has a superior goal difference (+15 to +8), meaning a draw at Maccabi Tel Aviv on Saturday should be enough for Jerusalem to book its place in continental competition even should Petah Tikva win at Maccabi Haifa.Petah Tikva remained within striking distance of Beitar after the latter drew 1-1 at Beersheba on Monday, a day after the former claimed a 2-1 victory over Maccabi Tel Aviv with a stoppage-time winner.Beitar is hoping to play in Europe for a second straight season after previously going seven years without continental action. Jerusalem is already well into its preparations for next season, with Eli Ohana expected to soon be announced as the club’s new boss.Owner Eli Tabib is not allowed to be involved in the running of the club over the next two seasons, a ruling made by the Israel Football Association’s ownership transfer committee last summer following his conviction in June 2015 of assaulting a minor and of disruption of justice.The committee didn’t bar Tabib from retaining his ownership, but ordered him to disconnect himself from running the club.With Ohana being a good friend of Tabib, and having a cult status among Beitar fans, he was a natural choice to take charge, leaving his role as a TV commentator for the position.Ohana, whose deal could be for as long as five years, received the nickname “the prince” from Beitar fans in the 1980’s, helping the club to its first-ever league championship in 1987.He went on to win the European Cup Winners Cup with Belgian club Mechelen in 1988 before returning to Beitar in 1991 while it was in the second division. He led the team to promotion and to a championship the following season before ultimately retiring in 1997. Ohana also coached Beitar between 1999-2000 and 2003-2005.The official announcement is expected in the coming days after which a decision will be made regarding coach Sharon Mimer’s future. Mimer replaced Ran Ben-Shimon in February and has won over the fans, with many of them being initially wary of his appointment a mere two weeks after he was sacked by Kfar Saba.“I wouldn’t say I’m concerned about my future at the club, but I have already started preparing for next season as the Europa League qualifiers begin early in the summer and there needs to be continuity at the club,” said Mimer. “I believe I will meet with Tabib soon and we will find out if I’m continuing. We have been discussing potential signings for next season for a while now.”Also Saturday, Beersheba hosts Bnei Sakhnin in both clubs’ final match of the campaign.