Even if Israel manages monumental upset in final qualifier, it needs Bosnia to lose to make playoffs. 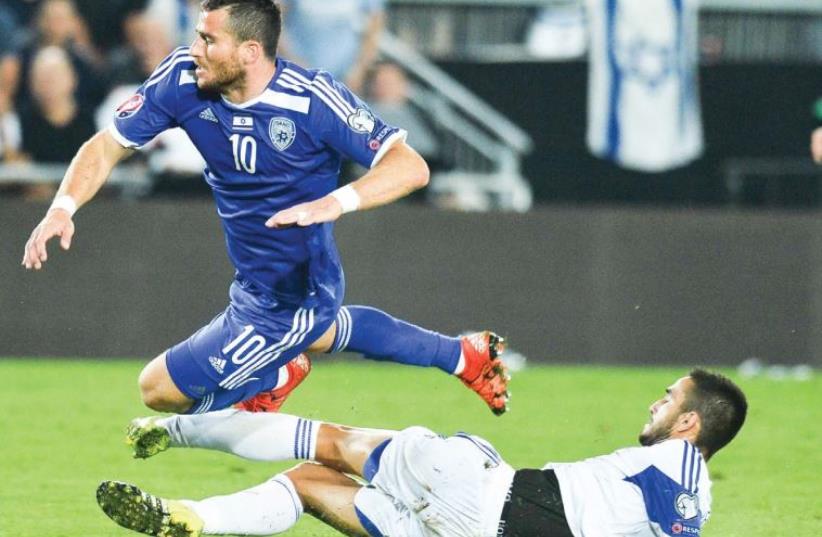 After falling flat against Cyprus, Israel striker Tomer Hemed (left) and the rest of the blue-and-white squad will be aiming to save some pride tonight in Belgium.
(photo credit: ASAF KLIGER)
Advertisement
While it continues to maintain a minuscule mathematical chance of advancing to the Euro 2016 qualifying playoffs, the Israel national team will be playing first and foremost for pride when it visits Belgium in Brussels on Tuesday night in its final Group B match.An Israel win combined with a draw or a Bosnia-Herzegovina loss at Cyprus will see the blue-and-white climb to third place and progress to a homeand- away tie for a berth in France next summer.However, while it still has everything to play for in Brussels, Eli Gutman’s despondent squad sounded and looked shattered after the shock 2-1 defeat to Cyprus at Teddy Stadium in Jerusalem on Saturday.A win over Cyprus, which since stunning Bosnia in its group opener had lost all five of its matches against opponents not named Andorra, would have left Israel only needing a draw in Brussels regardless of the result in Nicosia.However, the national team finds itself in a far more difficult position facing an almost-impossible task due to the disastrous defeat which left it with a mere four points from its last six matches.“It is hard to put into words the way we feel but we will play in Brussels with our heads held high,” said Gutman, who will likely be coaching the national team for the final time on Tuesday.“Clearly our chances are small, but they exist. Nevertheless, after losing at home to Cyprus the Israel national team has no right to be thinking about the playoffs, even though we still have a chance.”Belgium may well have little to play for on Tuesday after already clinching its place in the European Championships with Saturday’s 4-1 win over Andorra. However, the Belgians haven’t lost at home in an official qualifier since suffering a 1-0 defeat to Germany in Euro 2012 qualification over five years ago. They are also planning a festive evening in Brussels to celebrate their qualification with their fans, with a win to secure the team’s rise to number one in the next FIFA rankings.Defender Vincent Kompany has been declared fit and is likely to play despite the reservation of his club manager.“Vincent Kompany has participated fully in training and without any problems.I expect that he will be ready for the match against Israel,” coach Marc Wilmots told reporters on Sunday. “He has worked hard in training and knows his own body well.”Kompany’s call-up for the two qualifiers against Andorra and Israel in Brussels on Tuesday were criticized by Manchester City. City manager Manuel Pellegrini said the 29-year-old was not yet fit enough to play after a calf injury kept him out of the club’s last five outings since the home loss to Juventus in the Champions League on September 15.Gutman is set to make several changes to the lineup which lost to Cyprus, with one change being forced on him due to the suspension of Nir Bitton, who was the team’s best player in Teddy. Maccabi Tel Aviv defender Eli Dasa is out through injury.Sheran Yeini is expected to be handed a starting role after missing Saturday’s match due to his recovery from injury.“I’m sure everyone will do their best to register the best result possible,” said Yeini. “We can beat Belgium once in 20 matches and I hope that this will be that match.”