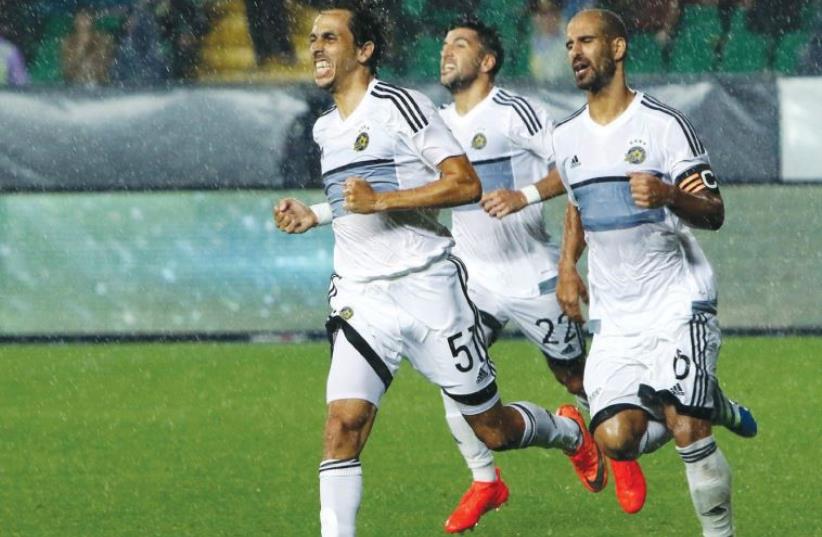 Maccabi Tel Aviv midfielder Yossi Benayoun.
(photo credit: UDI ZITIAT)
Advertisement
The next, and likely final, chapter of Yossi Benayoun’s career, one of the greatest in Israeli soccer history, will be played out at Beitar Jerusalem.The 37-year-old will be playing for a third different team in three seasons, leaving Maccabi Tel Aviv after just one year. After starting in only 14 Premier League matches and scoring a single goal, Benayoun was told that he would likely receive an even smaller role at Maccabi under new coach Jordi Cruyff in 2017/18. Cruyff asked Benayoun last week to wait a few more days before he makes any decision, but after he hadn’t received an offer for a new contract by the weekend, he decided to move on.The details of the one-year contract were ironed out in a phone call between Benayoun and Beitar’s new boss Eli Ohana on Sunday, with the latter calling from Nyon, Switzerland where he attended the Europa League qualifying draw on Monday.“I’m delighted and excited to be joining a team I have been a fan of my entire life,” said Benayoun. “In particular, as I’m coming full circle with my childhood hero, Eli Ohana. I can’t wait to play in front of the Beitar fans and I’m fully focused on working hard. I want to thank Maccabi Tel Aviv and Jordi Cruyff for the past year.”After playing in Europe for 12 consecutive seasons, including for the likes of English Premier League giants Liverpool, Chelsea and Arsenal, Benayoun returned to Israel in the summer of 2014 to join Maccabi Haifa. He was supposed to retire and receive a position in the club’s front office after two seasons, but instead ended up leaving for Tel Aviv in acrimonious fashion. Maccabi Tel Aviv was reluctant to extend Benayoun’s stay beyond a single season, allowing Beitar to add him to its squad.Benayoun will not only give coach Sharon Mimer additional options in the midfield, but will also help boost the club’s season ticket sales, as well as attract new sponsors.Benayoun could make his debut for Beitar as soon as next Thursday when the team opens its continental campaign.Jerusalem was drawn on Monday to face Hungary’s Vasas in the first qualifying round of the Europa League.. The first leg will be hosted by the Israelis on June 29, with the return leg to be played in Hungary a week later.Vasas finished in third place in the Hungarian league last season.The winner of that tie will face either Partizani of Albania or Botev Plovdiv of Bulgaria in the second qualifying round.Beitar will need to come through four ties to reach the group stage of a European competition for the first time in club history.Maccabi Tel Aviv did exactly that last season and will be aiming to repeat the accomplishment in 2017/18, being drawn on Monday to begin its campaign in the first qualifying round against Tirana of Albania.Maccabi is expected to cruise to the next round, with Tirana being relegated to the Albanian second division last season but qualifying for Europe due to its local cup triumph. Awaiting Maccabi in the second round is the winner of the tie between SJK Seinajoki of Finland and KR Reykjavik of Iceland.After extending the contracts of Tal Ben-Haim and Barak Itzhaki, Maccabi announced on Monday the addition of left-back Ofir Davidzada.Bnei Yehuda, which surprised Maccabi in the State Cup final, will start its campaign in the second qualifying round. Yossi Abuksis’s team will play either Trencin of Slovakia or Torpedo Kutaisi of Georgia.The draw for the first two qualifying rounds of the Champions League was also held on Monday. Hapoel Beersheba was paired with Honved of Hungary in the second qualifying round.Beersheba, which reached the Champions League playoffs last season and then the Europa League round of 32, hosts the first leg on July 11/12.The second leg will be played in front of empty stands in Budapest a week later, with Honved being punished by UEFA for racist chanting by its fans.