Kosher food makes an appearance at the World Baseball Classic, in which Team Israel competed. 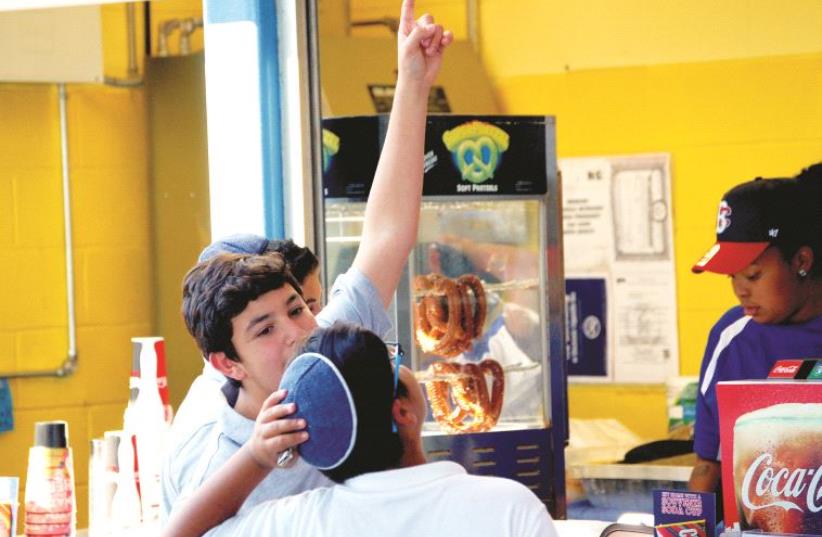 Children at a kosher food stand at the World Baseball Classic Qualifier tournament in New York
(photo credit: JOSH SOLOMON)
Advertisement
BROOKLYN – Sunday’s final between Israel and Great Britain was hours before the first pitch, but behind home plate was one of the most valuable people to the World Baseball Classic Qualifier tournament’s success, Eli Arje.What could be heard behind the closed gates of the makeshift Prime Kosher Foods stand a hundred or so feet behind home plate, in the early hours of the opening of the ballpark were Hebrew phrases thrown around the kitchen – effo this and mah zeh that (where is this and what is that?).Although there was probably less kvetching than usual since Arje and his team had their routine set a few hours away from wrapping up their second full season, there was still fair share of back-and-forth between coworkers cooking hot dogs and knishes.“Who’s playing tonight?” asked Rabbi Shaul Zohar, the mashgiah who supervises the food in this now-kosher kitchen.Great Britain.“Ah like the first night… and then it’s over.”He realized it was a rematch of Thursday night’s game and he also realized that the baseball season was coming to close in Brooklyn. So when employees for the stadium came in with supplies, he said, “last game. Give me everything you got.” And then retracted it when Arje told him what they have excess of already.“I got ketchup. I need mustard and relish.”Arje has become a fixture at Brooklyn Cyclones games the past two years. A few years ago though, Arje was working in the gasoline business with his brother. Things didn’t work out. He changed professions to the catering business.“I was asked [by a friend] if I wanted to work in kosher food, and I said yeah. Sports and food is my passion,” said the New Jersey native and now Brooklyn local before Sunday’s championship game, held at the Coney Island minor league ballpark of the major league baseball affiliate over in Queens.“I wish I could do this in more venues and God-willing, I’m waiting for the Mets to call,” he added.And it’s been a fast rise for Arje. He was raised Orthodox and attended yeshiva until attending college at Monmouth University in New Jersey. He worked with his brother for about five years and then transitioned to a new profession. When he got an opportunity in the food catering business, he jumped.When the Barclays Center opened in Brooklyn, hosting the Brooklyn Nets and later the hockey team the Islanders, the venue was looking for a kosher caterer. His friend whose father ran David’s Restaurant, a main-stay on Kings Highway in the borough, got the gig.Soon he brought on Arje to shadow him and eventually help out run David K’s kosher stands at the basketball arena.Around the same time the Brooklyn Cyclones were looking for a new kosher caterer for their ballpark. Arje entered the catering business. With just a small station and not even his own stand, he was able to upgrade for the big crowds on Jewish Heritage Night or other local Jewish events. When the World Baseball Classic, with Israel bound to come to the stadium, Arje was of course excited.“Oh yeah, one I would love to root for my heritage and two, I knew it would be a great turnout,” he said. “I wanted to experience Israel, the baseball side of it, because Israel only plays soccer and basketball.”After a few days, Israel proved its worth in playing baseball as well. Winning Sunday night’s game to advance out of the qualifying round and into the main event March, the blue-and-white definitely earned its stripes as well as the trip to South Korea.Arje won’t be going to Seoul to provide the kosher food, but he does hope to also open his own grab-and-go business to help supply places like ballpark and quick-stops, like 7-Elevens, in addition to making his push to be the kosher caterer for the Mets.He said that his competition tends to emphasize results and money.“Quality, production, service – that’s the first three things of business. That’s what I care about most right now.”This week at the WBC, Arje served knishes and pretzels. He also sold packed deli sandwiches (pickle included) from Tradition’s Deli.And, of course sausages and hot dogs, his highest selling product.“My favorite thing I serve is my Abeles & Heymann, all beef natural hot dog. Delicious.
Gluten free. Healthy. For a hot dog, it’s the number one out there,” he said in earnest.Then he cracked a smile, understanding how it came out. “Abeles & Heymann, you better pay me for the sponsorship.”Arje serves his kosher food Kof-K, one of the most traditional and widely recognized kosher certificates across North America.Naturally a few customers ask for stricter kosher certification, but Arje notes it’s difficult to get more kosher than him.And as for the numbers of what a good turnout looks like – Arje sold out 300 knishes and 1,500 hot dogs in just one night. If he makes it to the big leagues, though, maybe next year in CitiField with the Mets, he could see a day of selling 20,000 hot dogs.
Advertisement
Subscribe for our daily newsletter