Yakov Toumarkin became the first Israeli swimmer to advance to a semifinal on Wednesday, doing so in the 200-meter backstroke by a mere three hundredths of a second. 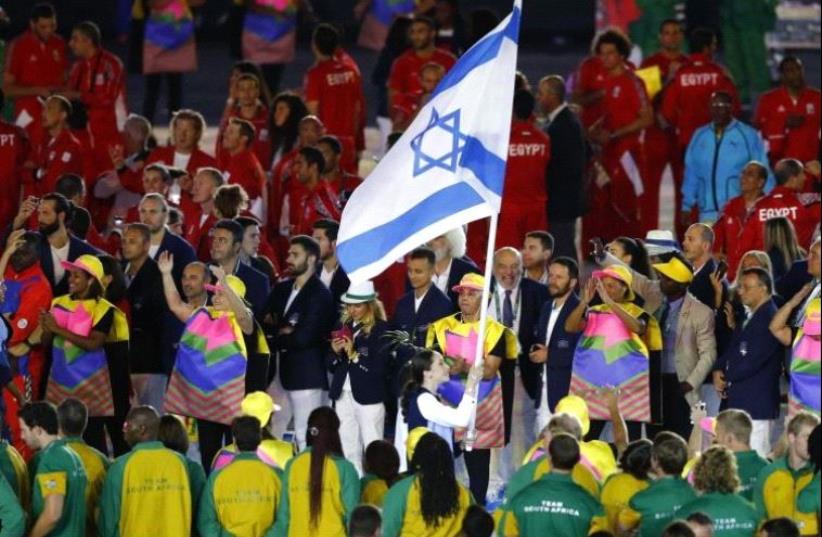 Israeli delegation at Rio olympics.
(photo credit: REUTERS)
Advertisement
For a third straight day, Israel had a judoka in an Olympic quarterfinal on Wednesday.But Linda Bolder could go no further, ending the women’s under-70 kilogram event in seventh place.After easily overcoming Yolande Bukasa of the refugee delegation in the first round, Bolder advanced to the quarterfinals in impressive fashion with a win over world No. 6 Seongyeon Kim of South Korea.However, her run was stopped in the last eight by Britain’s Sally Conway and her day ended in her first bout in the repechage, being beaten by World Championship runner-up Maria Bernabeu of Spain.Elsewhere, Yakov Toumarkin became the first Israeli swimmer to advance to a semifinal on Wednesday, doing so in the 200-meter backstroke by a mere three hundredths of a second.Toumarkin clocked a time of 1:57.78 minutes, good enough for the 16th and final place in the semis, which took place late Wednesday night in Brazil.Toumarkin ended the 200m backstroke final in seventh place in London 2012, the best-ever finish for an Israeli swimmer at the Olympic Games.While Toumarkin qualified by the skin of his teeth, Gal Nevo missed out by an identical margin. Nevo ended the 200m individual medley heats, his final event in Rio, in 17th place in a time of 1:59.80m, three hundredths of a second behind the final qualifier for the semis.Amit Ivry’s Olympics also came to a close on Wednesday when she ended the women’s 200m breaststroke in 28th place out of 29, touching the wall after 2:31.49m. Andrea Murez finished the women’s 100m freestyle in 30th place in a time of 55.47s.The men’s and women’s 470 Class sailing events got underway on Wednesday. Eyal Levin and Dan Froyliche are in 10th place overall after ending the day’s races in seventh and 15th, while Gil Cohen and Nina Amir sit in 17th (21st, 9th) in the women’s event.The 470 Class competitions continue on Thursday.The RS:X windsurfers return to action on Thursday, with Israel’s Maayan Davidovich well placed to challenge for a medal. Davidovich is in fifth place overall after six races, 11 points back of first place.Shahar Zubari, on the other hand, looks to recover from his disappointing start to the men’s event. Zubari is in 20th place overall.There will be 12 races in total before the top 10 take part in the medal race on August 14 to determine final places.