Two goals by striker Edin Visca and a penalty from Edin Dzeko helped Bosnia to a 3-1 win, reviving the hosts' chances of reaching the finals in France. 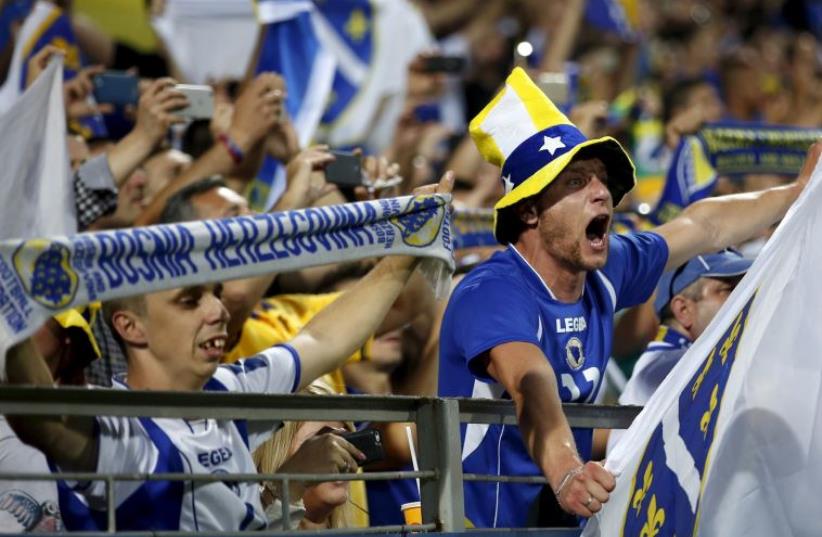 Fans of Bosnia cheer during their Euro 2016 qualifying soccer match against Israel in Bosnia and Herzegovina, June 12, 2015
(photo credit: REUTERS)
Advertisement
Perhaps Israel national team soccer player Ben Sahar was on to something.The forward made waves before Friday’s Euro 2016 qualifying match against Bosnia - which Israel proceeded to lose 3-1 - when he said that “the hostile Muslim spectators at the game [in Zenica] will spur us on.”His comment raised eyebrows, yet it appears that his concerns were well-founded. Pictures emerged of mobs of Bosnian fans stepping on a replica Israeli flag before the match. There were also reports that some extremist fans were chanting anti-Israel and anti-Jewish slogans.Two goals by striker Edin Visca and a penalty from Edin Dzeko helped Bosnia to a 3-1 win, reviving the hosts' chances of reaching the finals in France.Visca scored in the 42nd minute after Israel took a surprising lead against the run of play a minute earlier through striker Tal Ben Haim.Manchester City's Dzeko put the hosts in the lead in added time in the first half and Visca put the match to bed with a header from close range in the 75th.Wales, who beat Belgium 1-0, top the group with 14 points, three clear of Friday's opponents.Cyprus and Israel have nine and Bosnia are on eight points, with Andorra propping up the group on zero. All teams have played six matches.Reuters contributed to this report.