Even past his prime, Beitar counting on some magical moments from 37-year-old Israeli icon. 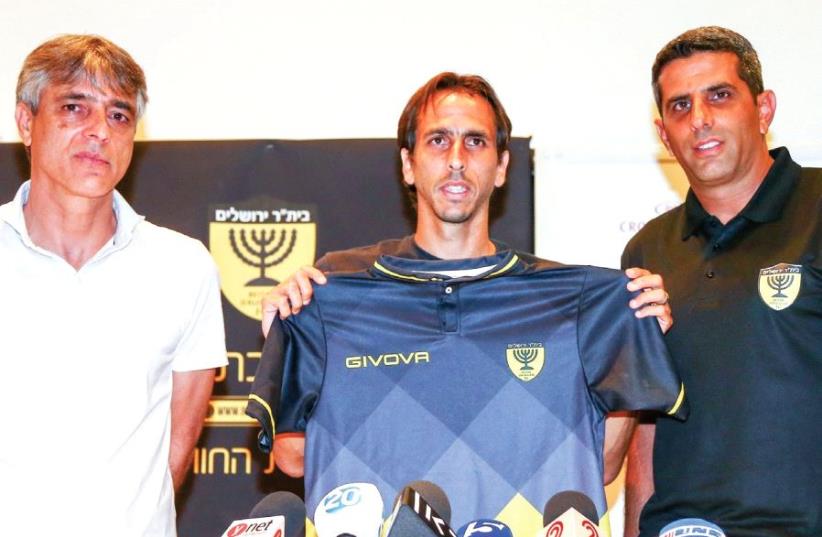 New Beitar Jerusalem midfielder Yossi Benayoun (center) poses with the team’s shirt alongside head coach Sharon Mimer (right) and club boss Eli Ohana during yesterday’s press conference in Jerusalem.
(photo credit: DANNY MARON)
Advertisement
Yossi Benayoun said he followed his heart when he decided to join Beitar Jerusalem, adding in his unveiling press conference on Sunday that he hopes to end his career at the club.The 37-year-old will be playing for his third different team in three seasons, leaving Maccabi Tel Aviv after just one year. Benayoun returned to Israel after 12 seasons in Europe in the summer of 2014, playing for Maccabi Haifa for two years before leaving for the yellow-and-blue.“I’m really happy to be here. This is the club I supported as a child and Eli Ohana was my hero,” said Benayoun, with Beitar’s new boss sitting on his right.“I followed my heart. My heart told me that I shouldn’t miss what is probably my last opportunity to play for Beitar.My intention is to retire here. Whether at the end of this season, or if I prove that I can still help the team, maybe in a few more years.”After starting in only 14 Premier League matches and scoring a single goal in 2016/17, Benayoun was told that he would likely receive an even smaller role at Maccabi Tel Aviv under new coach Jordi Cruyff. Benayoun said Cruyff recommended he joins Beitar should he decide to leave Maccabi.“A lot of players told me that I would be missing something in my career if I don’t play for Beitar,” said Benayoun.“I’m happy I will have the opportunity to do so.”Benayoun could make his debut for Beitar as soon as Thursday when the team opens its continental campaign.Jerusalem hosts Hungary’s Vasas in the first leg of the first qualifying round of the Europa League. Beitar needs to come through four ties to reach the group stage of a European competition for the first time in club history.Ohana, who took charge of the club following the banning of owner Eli Tabib, said he was delighted he could sign Benayoun.“He is one of the greatest players in Israeli soccer history,” claimed Ohana. “We think he can help us from a professional standpoint and can also help us from a leadership standpoint. With his experience and hunger, he is the right person at the right place. He has more hunger and passion than most 25-year-old’s.”Beitar coach Sharon Mimer is confident Benayoun can help improve a squad that finished in third place last season.“His age is irrelevant. His performance on the field is all that matters,” said Mimer. “We have a good core of players continuing from last season. The players we added will make us even stronger.The squad is already good enough, but we want it to be better. We have really high expectations and we hope to accomplish them.”Benayoun received a hero’s welcome at Beitar’s training complex at Bayit Vegan later Sunday, with over 3,000 fans coming out to cheer the squad in its first training session in Israel since returning from a short training camp abroad.The Premier League season doesn’t get underway for more than seven weeks, but Benayoun and Beitar can already look forward to a scintillating opener after being drawn to visit Maccabi Tel Aviv on the weekend of August 19.Champion Hapoel Beersheba will begin its campaign for a third straight title against newly-promoted Maccabi Netanya at Turner Stadium. Beersheba will then visit Maccabi Haifa a week later.The first meeting of the season between Beersheba and Maccabi Tel Aviv, the winners of the past five championships who are once more the favorites for the title, will be played on the weekend of October 21, in what will be their eighth match of the campaign.