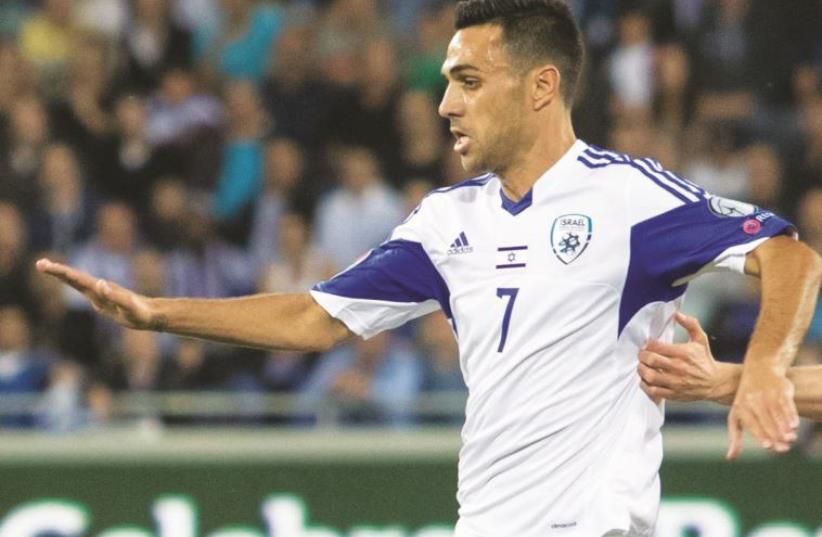 Israel midfielder Eran Zahavi is looking forward to the challenge of facing Spain and Italy in 2018 World Cup qualifying
(photo credit: ERAN LUF)
Advertisement
With the dramatic second-leg, second-half rally against Viktoria Plzen still fresh in its mind, Maccabi Tel Aviv will find out on Friday the identity of the final opponent standing in the way of the realization of its Champions League dream.With 20 minutes to play in the second leg on Wednesday night, the three-time defending Israeli champion seemed set to be knocked out in the third qualifying round for a third straight year.After losing the first leg at home 2-1, Maccabi had managed to muster just two shots towards the Plzen goal in the first 70 minutes of the return leg in the Czech Republic, with only one of them finding the target.The Czechs were cruising until they gave away a penalty, converted by Eran Zahavi in the 76th minute. However, even a 1-0 win would have seen the yellow-and-blue crash out on away goals.Maccabi needed another goal from somewhere and it was of course the unstoppable Zahavi who netted the second goal seven minutes from time to stun the local fans and move Maccabi ahead on aggregate, a lead it held onto until the final whistle after surviving a tense last few minutes.Maccabi, which is aiming to reach the group stage for the second time in club history, and the first since the 2004/05 season, will not be seeded in Friday’s draw and will face either FC Basel of Switzerland, Celtic of Scotland, APOEL Nicosia of Cyprus, BATE Borisov of Belarus or Dinamo Zagreb of Croatia.The yellow-and-blue will first and foremost be hoping to avoid Basel, which reached the Champions League round-of-16 last season and knocked Maccabi out of the Champions League and Europa League two seasons ago.The win against Plzen has already ensured Maccabi an extended continental campaign, as the losers in the playoffs are all handed an automatic berth to the Europa League group stage.Maccabi has already guaranteed itself around NIS 20 million even should it be sent packing in the playoffs, with progress to the Champions League group stage to be worth around NIS 50 million, from UEFA prize money alone.After signing just two players so far this summer, Tal Ben- Haim and Avi Rikan, Maccabi is set to make several additions over the next couple of weeks, with the first leg of the playoffs to be played on August 18/19 and the second leg a week later.“We need to strengthen the team,” admitted Maccabi sports director Jordi Cruyff. “We need a bigger squad. We are going to have a lot of games so 100 percent we need to bring players. It was always the plan to bring players, but for sure now we have to sign new players. We have identified our objectives a long time ago and now it is a question of trying to make the best deals and bring them in as soon as possible.”Cruyff didn’t return with the team to Israel on Thursday and will attend Friday’s draw in Nyon, Switzerland.“Now it is time to show our ambition and sign the right players and to strengthen the team. But meanwhile we also need to continue believing in this team because they deserve the credit,” added Cruyff.With his two goals on Wednesday, Eran Zahavi passed Alon Mizrahi as the all-time leading Israeli scorer in European club competitions, taking his tally to 17 goals.“This is one of the greatest moments in Israeli soccer history,” Zahavi said upon the team’s return home on Thursday. “No one believed in us, but we guaranteed ourselves a long European campaign. However, we still want to realize our big dream, which is to reach the Champions League group stage.”