The blue-and-white progressed past the first round of the European Championships for the first time since 2007. 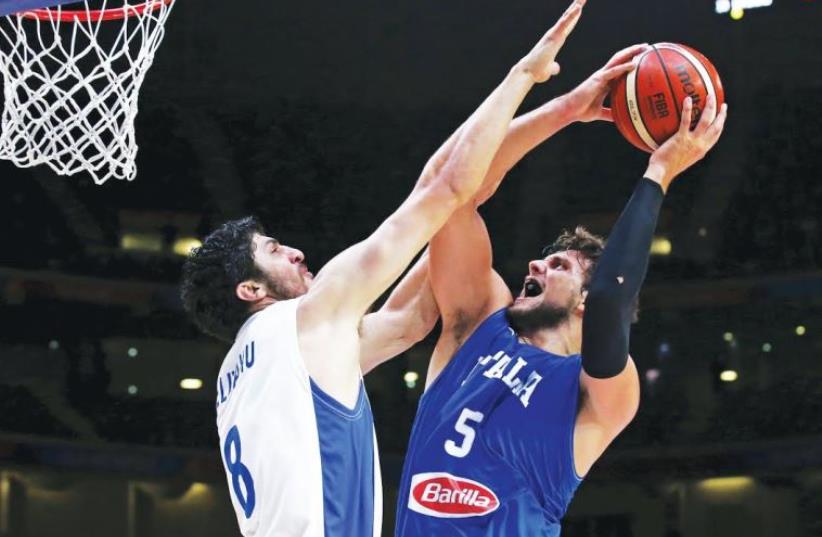 Italy's Alessandro Gentile (R) goes for the basket against Israel's Lior Eliyahu during their 2015 EuroBasket 2015 round of 16 match at the Pierre Mauroy stadium in Villeneuve d'Ascq near Lille, France
(photo credit: REUTERS)
Advertisement
Even after getting back to Tel Aviv on Monday afternoon, a day after the humbling exit from EuroBasket 2015, Israel coach Erez Edelstein was still lost for answers regarding what had happened to the national team.The 82-52 defeat to Italy in the Round of 16 in Lille, France, on Sunday night was a bitterly disappointing ending to a championships which began with little expectations, continued with surprise progress to the knockout rounds, only to be cut short in painful fashion.The blue-and-white progressed past the first round of the European Championships for the first time since 2007 and entered the showdown with Italy believing it can reach the last eight for the first time since 2003, and just the second in 32 years.A single win in eight warm-up games meant the expectations were extremely low ahead of the tournament, but wins over Russia and Finland to start the championships changed everything, and even the dejecting defeat to Bosnia-Herzegovina couldn’t derail the blueand- white, which qualified for the knockout rounds with a game to spare after beating Poland before losing to France in its final group game.Israel scored the first points of Sunday night’s showdown, but never led again. Marco Belinelli’s three-pointer to end the first period gave Italy a nine-point margin (22- 13), but Israel closed to within four points in the second quarter and was still within striking distance at the break (40-30). However, the contest was as good as over by the end of the third frame, with Italy steamrolling Israel, winning the quarter 28-9.Italy cruised to the win despite receiving only 13 combined points from NBA players Danilo Gallinari and Andrea Bargnani, with Alessandro Gentile leading the way with 27 points, while Belinelli finished with 14 points.Gal Mekel led Israel with 20 points and five rebounds, with Lior Eliyahu adding 12 points. Omri Casspi was held to eight points, with the rest of the blue-and-white roster combining for a miserable 12 points.Despite the dejecting finish to the tournament, Edelstein, who is set to continue as coach, believes the positives far outweigh the negatives.“We are very disappointed with the loss to Italy. That isn’t the way we wanted to play,” said Edelstein.“Nevertheless, we had a very good championships. We were playing against Italy, which in my opinion is one of the candidates for a medal. They were ready for us and they deserve credit for that, but I can’t really explain what happened to us.”Israel’s stars also struggled to pinpoint the reason behind Sunday’s capitulation.“It wasn’t our day,” said Casspi. “They caught us on a bad day. Our play didn’t flow, defensively or offensively. I’m disappointed with myself and with the way we played as a team.”“We didn’t expect anything like this,” added Eliyahu. “All in all we had a very good championships and it is disappointing to end it like this. It isn’t like us to lose like this. No one expected to be down 30 points in the third quarter.”“We were really waiting for this game and this was not what we had hoped for,” said Mekel. “I’m really proud of our group. It is a shame the tournament finished like this, but I will remember the good moments.”Israel missed a chance to move within one win of advancing to the FIBA Olympic Qualifying Tournament, but is still hoping to receive a ticket to next summer’s event as the host. The teams that will finish in third to sixth positions in EuroBasket 2015, combined with the host, will battle for a single ticket for Rio 2016.Should Israel not be chosen as the host, its next mission will be the EuroBasket 2017 qualifiers next summer.“We should have fought until the end,” added Edelstein, who has a contract for two more years.“We managed to close within four points in the second quarter, but they took two offensive boards and extended the gap once more. I told the players that we shouldn’t lose like this to any team in Europe. We should have shown more hunger and pride, especially as it was Rosh Hashana.”Meanwhile, Spain became the first team to secure its place in the semifinals on Tuesday, beating Greece 73-71 behind 27 points and nine rebounds from Pau Gasol.Defending champion France faced Latvia late Tuesday.Israeli coach Neno Ginzburg will aim to lead the Czech Republic to a surprise place in the semis on Wednesday when his team faces Serbia.The Czechs stunned Croatia in the Round of 16. Also on Wednesday, Lithuania locks horns with Georgia.“We are one game away from the Olympic qualifying tournament,” said Ginzburg. “Serbia is a really good team, but we must try. What has got us here is our defense and we will try and stop them. It is very impressive to be among the last eight and we are all very excited. However, we will be focused on the game once we are on the court.”